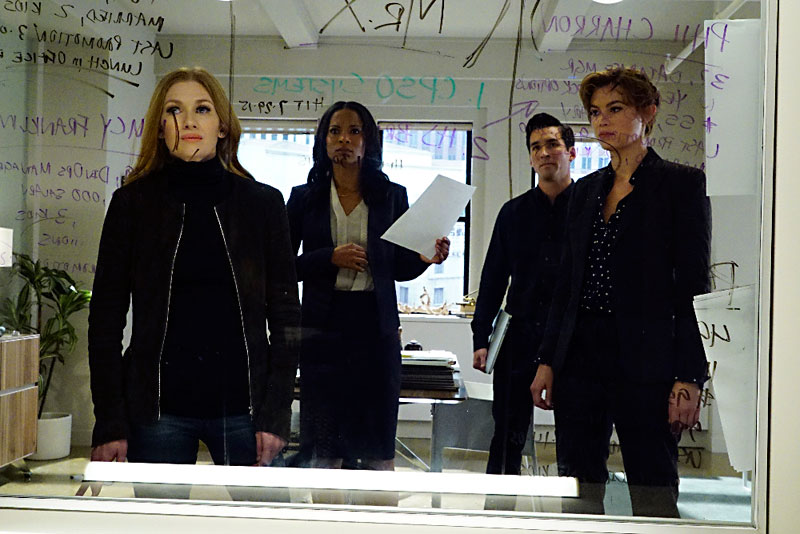 I saw Ang Lee's Brokeback Mountain in the theatre many times – very good movie – and every time, at the point where Michelle Williams discovers the plot of the movie she's in and goes buck-wild, it caused an outburst of laughter. My friend Sarah was very unimpressed by this laughter: this dumb woman who got tricked. I don't think she was ever entirely convinced by my anecdotal mansplaining that nobody would ever laugh at her in that moment: a crowdsourced "Oh girl," rather. A comforting, shared anxiety for her.

There's this tension whenever a TV show goes somewhere dark. If the woman is the hero, and we don't want bad things to happen to women, that's the end of stories about women. I keep it straight by remembering that, to a determined eye, Buffy the Vampire Slayer could be described as a weekly opportunity to watch a beautiful blonde getting the crap beat out of her.

To overcome this, a show must either be literally about this contradiction (Jessica Jones), or so thoroughly branded as female nobody gets confused. Imagine the think pieces if New Girl – side note, never better than it is right now – had debuted its kooky heroine and awkward dating stories with a male creator credit. We've been trained to ask: How will you let me down? What's the catch?

When The Catch premieres Thursday, March 24, on ABC – pilot by edgy Hannibal alumna Jennifer Schuur and filmed in Austin by producer Julie Anne Robinson – it will put that DNA to the test, while asking a very simple onion of a question: How do you tell a story about the very current topic of gaslighting in a way that is not only sexy, fast-paced, funny, and moving, but most of all, respectful of its female protagonist?

Well, start her out in Shondaland. As Trotsky would say, you can't teach anybody anything, just establish a scenario in which they may educate themselves. Or as Rhimes herself put it, accepting the PGA's Norman Lear Award this year, "It's not trailblazing to write the world as it actually is." And that definition continues to expand with every addition to the franchise.

Two "Grey's formula" spin-offs, Off the Map and Private Practice, put all-star talent in great roles and then didn't let them do anything. Scandal, a superhero fantasy in which a black woman has all the powers of a regular white man, has gone from OMG to WTF, and come back from obscurity,as regular as clockwork. How to Get Away With Murder, the show with the least obvious Shonda DNA and the worst title of any network drama in history, has given us the most riveting cast in years, and plotlines still threading together from the pilot as the second season ends.

Then, surround her with women, behind and in front of the camera. Cast Mireille Enos, one of the most multifaceted and watchable actresses in a generation, jumping from frumpy Big Love sisterwife to The Killing's aching genius to, now, a glamorous forensic accountant (I know!). Give her superpowers that do not include invulnerability: Make her Batman, to early Olivia Pope's Superman. And if you must give her a male showrunner, make it that rarest of the breed: one who knows the difference between a Strong Female Character and a strong woman.

(In this case that's Allan Heinberg, a Shondaland vet known in comic book circles as the creator of Young Avengers' Wiccan and Hulkling, the best and practically only worthwhile gay superheroes since Warren Ellis gave us the original Authority's Apollo and Midnighter.)

As a lead, Enos' Alice Vaughan, like Olivia and Annalise before her, is in it to win it. As in love with her taunting nemesis "Mr. X" as with her fiancé (Peter Krause). For starters, imagine a high-powered Lois Lane, learning her Clark Kent is Lex Luthor in disguise ... and that's when their already incredibly romantic love affair turns hot, and our story begins.

Charade, Gone Girl, The Thomas Crown Affair – all are represented here, and that's a good place to begin. But it's Alice's love of the game, and her rich relationships with her friends and co-workers, that set the show apart. The catch is: There is no catch.

The Catch, Shonda Rhimes, Grey's Anatomy, How to Get Away With Murder, Scandal, Mireille Enos