Tilling the Soil of Tomorrow 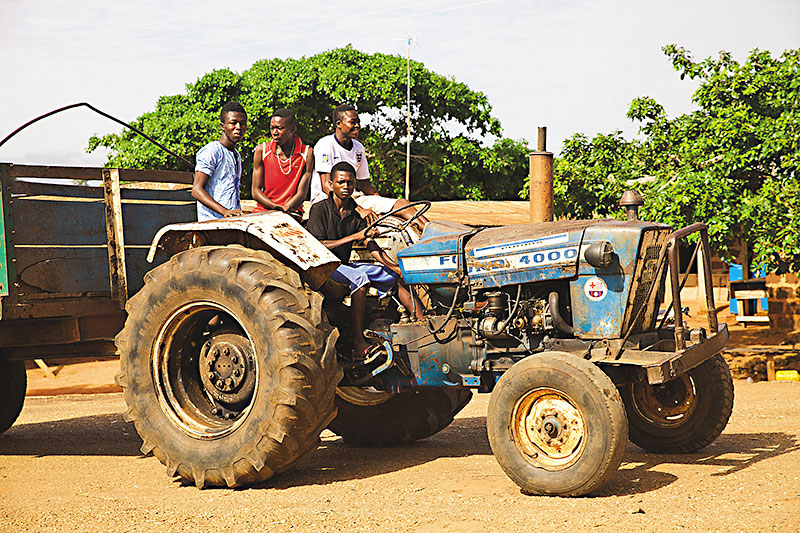 When Simone Wittmann and Federico Lameri found themselves on a small farm in West Africa last summer, they were on unfamiliar terrain. For starters, they were more accustomed to working with ideas than with dirt. Asked recently if they had any background in agriculture, they laughed. "Not at all," said Lameri. "My specialty is toy design."

They were part of a team from the Munich-based offices of Frog, a design firm that made its name in the Seventies and Eighties helping brands like Sony and Apple develop the Walkman and the personal computer. In 1984, the company helped design the Apple IIc, found today in the permanent collection at the Whitney Museum of American Art. By contrast, the Frog team's arrival at a modest farm in Ghana – described by Wittmann as "one guy, one field" – must have felt like a very back-to-the-Earth moment. But the trip wouldn't be about man communing with nature; it was about man communing with technology.

"To me, it seemed very romantic because you sit on a huge mango tree, and you see the pineapples growing around you," said Wittmann. "But the farmers all dream about having an American-style farm. They all dream about getting big machinery and getting rich." The task before Lameri and Wittmann – who describes her job as "meeting the people we're designing things for and trying to find out what they really need" – was to help the farmers take a few steps toward realizing that dream.

The farmers were part of mAgri, a pilot project for helping small-scale farms improve productivity. It operates as a farmers' club through which participants are provided information – e.g., about regional weather, market pricing, and agricultural best practices – to which they would not otherwise have access. Their lifeline to this information is a singular piece of technology: the "feature" phone – a mobile phone with Internet access and texting capabilities but none of the advanced features of a smartphone. Just as the Walkman paved the way for the smartphone, the feature phone – if all goes well – could be, for the mAgri farmers, a gateway toward the farm of the future.

To help make that happen, the Frog team's job was to identify the challenges faced by the farmers in leveraging the full capabilities of a tool that they mainly used like a traditional phone – for calling friends and family. What they learned was that the farmers' children, who were often more well-educated than their parents, were an essential link to the technology. "The children really help the parents to use the phones," said Wittmann.

"These are the kinds of things our teams discover when they're in the field," explained Frog Exec­ut­ive Creative Director David Cleaves. "These discoveries are what's driving a lot of the design." In response to their findings, said Cleaves, the team is designing software for the phones using "different styles of literacy" – for instance, greater use of infographics to appeal to visual literacy.

The team witnessed similar barriers while working on a project with commercial farmers in Brazil, where the farms are much bigger and the technology is more advanced. Describing the farm equipment, Wittmann said the inside might have up to five monitors and the outside "looks like some rocket is attached to it." Nonetheless, the team found that farmers often were not the ones in charge of the technology. "Similar to Ghana, they didn't have the education to use it," said Cleaves. "They would have smartphones and iPads and everything, but the head of the farm often wasn't the one who could really use it – they would have some secretary or other [employee] help."

The implications of such technology gaps are far-reaching. According to the Food and Agriculture Organization, global food production needs to increase by 70% by 2050 to meet anticipated population growth. In developing countries, it needs to increase by 100%. Meanwhile, the land and water resources necessary for such an expansion often aren't located where they're most needed – hence the need to intensify use of existing agricultural land. Today's farmers, be they in Ghana or Brazil, need to produce more with less. The downside may be the destruction of that Arcadian view from the mango tree – but the upside, at least in theory, is preservation of wildland that is otherwise increasingly fragmented and losing biodiversity.

But intensification gives rise to new challenges. Greater use of chemicals can increase yields, for example, but also poses health and environmental problems. That's why Frog's projects are helping farmers leverage technology to increase productivity while minimizing the downsides. In Brazil, this means that Frog is helping clients who are working toward "selling a healthy field instead of selling liters of chemicals," said Wittmann. The idea is to use sensors, satellites, and drones to collect data that can, say, anticipate a pest infestation coming from a certain direction. With that information, a farmer can use chemicals more strategically. Under this model, said Cleaves, the farmer would pay a company for a healthy field "regardless of whether it requires any chemicals at all."

The challenges are found in the gap between the available technology and farmers' capacity to make use of it. The team discovered three levels of communication breakdown contributing to this problem. First, said Lameri, "these different technologies, such as drones or sensors on the tractors and on the fields, are not really communicating with each other – so for the farmers, the result is that they're not really able to interpret the data." Second, companies that can interpret the data nonetheless face challenges conveying their findings. "Right now they ... haven't found a way to communicate that data back to the farmers and help them make use of it," said Wittmann.

Third, "the problem of one farmer spreads to their neighbor, and their neighbor's neighbor," said Cleaves. "They're not all sharing information. It's really going to require larger brands or companies or nonprofit organizations to gather this information and interpret it across large swaths of land in order to know that ... a plant blight is coming from one particular direction, or maybe the humidity that we're seeing in this region is predicting that next week we're going to have a major fungus outbreak. We need to be able to share that across more than just one or two farmers."

The Frog team is so busy working on solutions to bridging these gaps that it won't even be taking a break during its panel – called Dirt, Drones and Data: The Future of Farming – at South by Southwest Interactive. "We will mainly be having people use their hands and their minds to work together in a workshop type of format to solve problems," said Cleaves. "Maybe craft a solution inside a model farm."