Autonomous Cars Are Coming! Is the Public Ready to Relinquish Control? 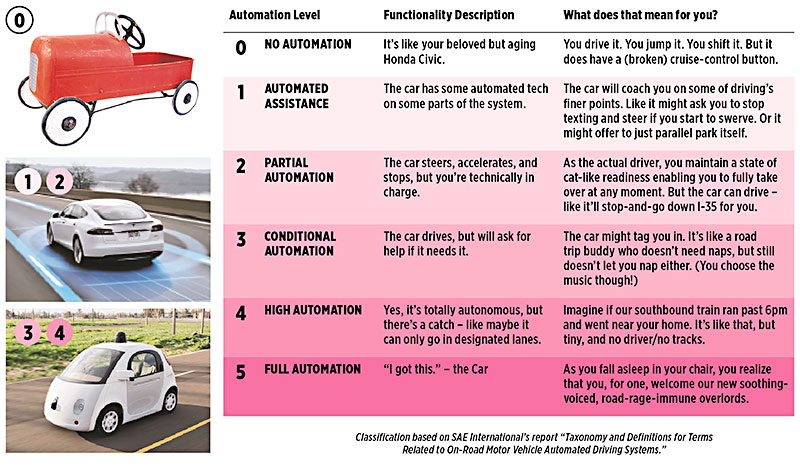 How Automated is Your Car?

There are some good reasons to get excited about self-driving cars. Like you could pass your road time on Netflix, safely text "OMW," or eat a Whataburger Honey Butter Chicken Biscuit without getting the steering wheel all sticky. But as C3 president, longtime auto-industry journalist, and SXSW Interactive panelist Doug Newcomb points out, there are also great reasons to get excited about autonomous automobiles, like safety. "There are 30,000 traffic deaths every year in the country. That's like a 747 going down every week," says Newcomb. "If that was happening, people would say, 'We gotta do something about this!'" But when it comes to our beloved cars: "We just kind of accept it," he says. In their panel How Self-Driving Cars Will Remake Cities, he and fellow panelist Seval Oz (Continental Intelligent Transportation Systems CEO, previously of Google), will discuss how self-driving cars could change that and a lot of other things we take for granted.

Human-operated cars have been riding the wave of cognitive dissonance for a while now. But their days might be numbered thanks in large part to Google. "Google announced about five years ago, at the end of 2010, that they had surreptitiously logged over 100,000 miles in their self-driving cars. That was a kind of watershed moment," says Newcomb. Although automakers had similar technologies around the same time (think Audi's self-driving TT), Google captured everyone's attention. "In the past five years all the automakers stepped up their autonomous-driving car research," he says. And they've made a lot of headway. "Nissan has said they will have a self-driving car by 2020," says Newcomb. "Google has said something similar."

Even if manufacturers and tech companies think the technology lies within reach and policymakers can keep up, at least one hurdle remains: us. That's the topic of another self-driving car panel at SXSW this year, hosted by Dr. Johanna Zmud, a senior research scientist at the Texas A&M Transportation Institute and director of its DC office. Her team completed a self-driving car consumer opinion study here in Austin. They found about half of those surveyed said they'd "likely use" a fully autonomous car, like Google's. That percentage would need to improve and some misconceptions would need addressing before the technology could save the number of lives we all hope. "People don't realize that this is really a disruptive technology that is going to change their lives," says Zmud. "They are trying to fit the technology into their current lives and ask how it would change their current life. But really, it would entirely change how mobility could happen." Study participants also seemed unclear on how the cars would operate. "People seem to think that they would be able to turn the automation off," says Zmud. "But the Google car doesn't have a steering wheel. It doesn't have a gas pedal. You can't turn that automation off, and that's not in the consumer mindset."

Zmud will discuss more of her findings and their social implications along with fellow speaker Gretchen McFarlan (VP of business development at C3 Group) at their panel, Texas as a Self-Driving Car Case Study. Teaser trailer: They have data on ways self-driving cars may impact Austin's hell-spawned traffic.

A version of this article appeared in print on March 11, 2016 with the headline: Driving on Autopilot