They had 13 blank bullets to shoot in the crucial scene. It was 3am on a frigid morning at Jourdan-Bachman Pioneer Farms, a living history museum on a swath of tree-filled acreage surrounded on all sides by a residential North Austin neighborhood. Duane Graves and Justin Meeks were in the middle of filming their dark Western Kill or Be Killed.

Go. The explosions barked toward the houses and echoed. Go again. Four takes in all before the police cars arrived.

"It wasn't our first rodeo," Meeks said and recounted an earlier short film production halted when police arrived at a rural creekside just as an actor was yanking a fake heart out of a bloody chest.

Kill or Be Killed was originally called Red on Yella, Kill a Fella, but retitled for release March 1 by RLJ Entertainment on DVD, streaming and in Redbox locations. First they'll have an Austin screening Feb. 29 at the Alamo Drafthouse Village. It's the latest step in a slowly widening career for the unlikely filmmaking partnership that began in a college classroom and now finds both with wives and children.

Graves is the self-described emotional one who takes it all a bit too personally. Meeks is the charismatic actor/filmmaker with hair flowing down to his shoulders and an easy grin. He stars in Kill or Be Killed as outlaw Claude "Sweet Tooth" Barbee. Meeks' early work was dark, dark, dark. Graves first gained note when Slamdance screened his heartwarming and funny 2000 documentary Up Syndrome, chronicling his childhood friend Rene Moreno, who was born with Down syndrome. It includes VHS footage of the pair shooting goofy horror films in their backyards on a camera Graves begged his parents to buy him.

"Being co-directors is not for everyone," Graves said. "You need to know when to yield."

Have they ever come to blows? No, they say. But there have been disagreements.

"There are two egos here," Meeks said. "You have to put it in check."

"We end up laughing about it later," Graves said. "Two brains are better than one." Their films have tended toward horror, but also pull on history and legend. The Wild Man of the Navidad played on the Texas Bigfoot story told by folklorist J. Frank Dobie in the Twenties. Kill or Be Killed is loosely inspired by outlaw Sam Bass and his gang, but also pulls in the supernatural, and in tone honors spaghetti Westerns of the Sixties and Seventies. In it, ruthless outlaws travel 500 miles in search of money they hid after a robbery. Along the way they must contend with an evil force set on revenge.

Wild Man was shot on a shoestring budget mostly on land owned by Meeks' family. The film sold to IFC Films in 2008 and premiered at the Tribeca Film Festival. While at the festival, they talked up what would become Kill or Be Killed to the Weinstein Company.

"They listened to our pitch," Meeks said, "but we hadn't written it yet. That really forced us to. We knew from experience the script had to be tight, tight, tight." They spent the next year hammering out the story, but by the time they had it written, the go-to people at Weinstein had changed.

Graves and Meeks met in a Texas A&M-Corpus Christi screenwriting class taught by Kim Henkel, co-writer of the original Texas Chain Saw Massacre. Meeks' dark writing gained Henkel's praise while Graves earned the nickname "The Ghost" for a devotion to editing so zealous he often got locked in school buildings with alarms set.

Henkel became their mentor through Wild Man, then offered them a bigger gig, co-directing his Chain Saw-esque story Butcher Boys about crazed cannibals loosely inspired by Jonathan Swift's satirical essay "A Modest Proposal." It was a grueling gig with a cast and crew much larger than the duo had ever experienced.

"It was the first time we'd done hired work, where the writer and producer weren't us," Graves said. "It was a legitimate crew. It was time to sink or swim." It was also a lesson in how a director's vision has to bend as part of the creative process. "We hadn't experienced the pushback – which isn't always a bad thing," Graves continued. "You don't get carte blanche to do exactly what you want."

The co-directors left the project determined to forge ahead with their Western story polished and refined.

"It's psychologically driven," Meeks said. "We wanted to give it substance, not just blood and guts."

"We kept hearing 'It's a great script, but you'll never pull it off at the level you're doing it,'" Graves said. 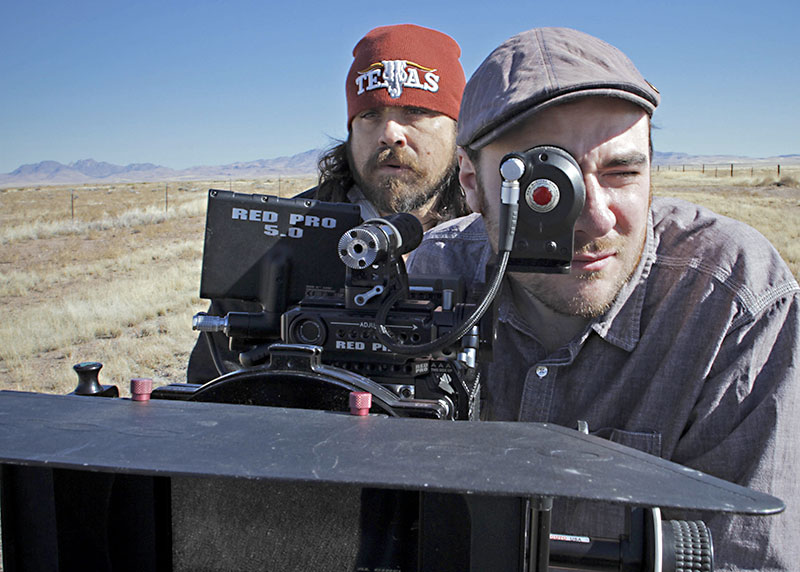 "We like to bite off more than we can chew," Meeks said.

The secret? Thorough location-scouting of every purported Old West town in Texas. "Some, we'd get there and they'd say, 'That burned down eight years ago,'" Graves said.

Late in the game, they checked out Pioneer Farms, with its mix of wooded area and Old West town. "We realized this is what's going to save the film," Graves said. "In three weeks, we used every square inch of the space."

One big snag was the need to shoot inside a church, something that was proving impossible. Then they discovered Pioneer Village in Gonzales, where building interiors were already fully outfitted for the era. Most important was a church so realistic the filmmakers were convinced it had to be the site of real-life services (it wasn't). "That cut our art department costs significantly," Meeks said.

The actual filming was almost split between three brutal weeks before Thanksgiving on the road, and three weeks after the holiday at Pioneer Farms. "The first part was a hardcore journey," Graves said. "We slept on cots, drank well water." Meeks added, "We were desperadoes on the road making a Western. It was like making it was a Western in itself."

The film comes out when Westerns are back in vogue following Quentin Tarantino's The Hateful Eight. Their film shares a distributor with recent Western Bone Tomahawk, as well.

"Our stuff has an uncanny ability to find its way," Graves said. "There's a little bit of luck involved. We hit the timing just right for Westerns."

It all came down to the pair's basic philosophy of filmmaking: With each project, make the playing field and the challenges a little larger. "You've got to stick with it," Meeks said. "You can't expect in one year you're going to make it."

Listen up, would-be filmmakers. This is the co-directors' advice for you:

"Do something original," Meeks said.

Kill or Be Killed screens at the Alamo Village Monday, Feb. 29, 7pm. The film will be released on VOD and DVD March 1.

Kill or Be Killed, Red on Yella, Kill a Fella, Duane Graves, Justin Meeks, The Wild Man of the Navidad, Kim Henkel