Mediterranea puts a real face on a topical subject 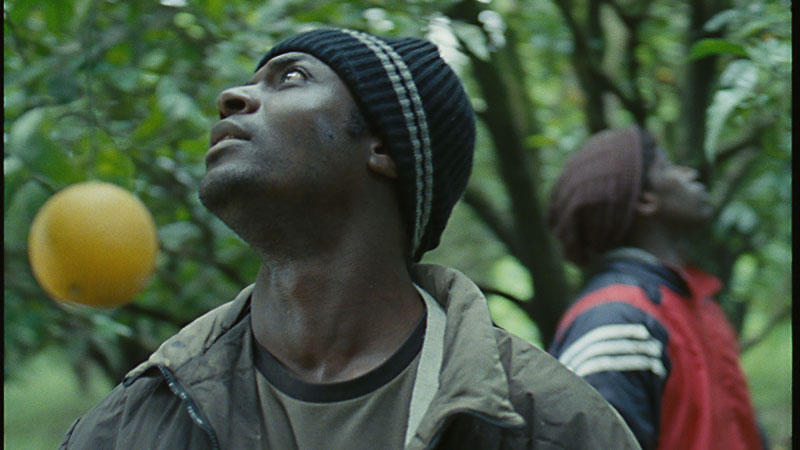 "We had people who went through this. There's a lot of feelings that come out for them, when they relive this moment," explains director Jonas Carpignano, from an undisclosed location in Italy. Right off the front pages of The Guardian and The New York Times comes Carpignano's Mediterranea, one of the more prescient pieces of cinema in recent years.

The Italian-American auteur maintains an interesting handle on the subjects presented, having split his childhood between Rome and New York City. His first feature is an amalgamation of two previous shorts, "A Ciambra" (2014) and "A Chjàna" (2012). Though characters from both films appear in Mediterranea, the latter short serves as the basis, feeding directly into arteries of the feature with its inherently explosive framing around the 2010 Calabria race riots.

The clashes in working-class Rosarno, a city at the Italian boot-tip, known for its citrus groves, involved dozens of rock-throwing African immigrants who damaged storefronts and torched vehicles. Provoked by actual and perceived racism, they took to the streets in anger after a Togolese man was wounded in a pellet-gun attack – possibly perpetrated by a local organized crime syndicate. Over 50 immigrants and police officers were injured.

"The first time I heard something about that subject, it was about the race riots that happened in 2010. I made 'A Chjàna,' and I realized that there was more to this story than the first film," says the director. Carpignano's happenstance friendship-turned-professional relationship with Koudous Seihon, a Burkinabé who plays Ayiva, changed his personal trajectory.

"I met Seihon when I was casting 'A Chjàna.' We immediately became friends, and it snowballed from there. He and I became very close. I visited him and his family, in Burkina Faso. He told his life story, so he very quickly became the inspiration for the film."

Mediterranea concerns two friends – the amenable Ayiva and the intractable Abas (played by Alassane Sy) – with differing outlooks on their respective futures. The broader-thinking Ayiva struggles with leaving his young family, while Abas eyes sexual escapades, and perceived European glitz and glam found on their mutual friend's social media. Their travels from Burkina Faso to Italy, of course, are fraught with perils that seem to build onto one another, from acquiring funding for their venture, to hazardous travel conditions and the rushed integration into Italian life. Naturally, the hazards leave the duo in vulnerable states, which bring out in each what bubbles just below their surfaces.

There's an intoxicating immediacy to cinematographer Wyatt Garfield's angling, and its palpable nearness and density – the watcher is almost an unwitting participant in Ayiva's journey, a third unnamed character encompassed into their reality. There's some precedent for its viewpoint. "In The Battle of Algiers, there's a disclaimer saying, 'This is not a documentary.' When you see that, you think, 'Oh, these people are audacious' – like is it gonna feel that real? And, it does feel that real. That process is something I tried to emulate. You can tell in The Battle of Algiers that they set up an event, like an explosion. They just set that up, and let it happen – they're not really constructing it through individual shots, and that was the idea."

Though Carpignano and Seihon became fast friends after meeting, the project was far from a done deal. The non-classically trained Seihon's apprehension in telling his story in front of the camera placed a significant snag in the short's creation. "At first, he didn't want to do the short film. So, over the week I was convincing him to do it, where I was trying to say, 'This is important. We have to try and get this thing done.' We became super tight because there was so much back-and-forth. We shot the short, but after that, we stayed in touch. Then, we decided to be roommates. The more he told me his story, the more it turned into a feature, and it was more than just this riot. There's nothing like an argument to make people closer, faster," he says with some irony.

When the Sundance Insti­tute came calling, Carpignano was caught unprepared, but quickly rebounded. "The short was traveling around, it had some success. Sundance called and said, 'Hey, we really like the short film – is there a feature you're working on?' I was like, 'Yeah, yeah, I have a script,' which was a lie because I hadn't gotten a chance to finish it. They gave me a deadline, and I just went in. I locked myself in a room and put my head down.

"I got into the Sundance Feature Film Lab program, [and] the most valuable thing is that they make you confront what you're writing and what you're doing within the context of the real world – both from the script level and the director's lab. It forces you to confront your style, the purpose of the script."

Bubbling just underneath the immigrants' existence is the uneasy balance between the new arrivals and the Italians, who are unsure and afraid of what the African presence means for them. "In Italy, because they're like a 'first wave' of immigrants, it's more xenophobia, sort of this invader feel – 'They're not from our country, and we have to find some way to deal with it.'

"In America, they can't do that because they are Americans. Black people have been living in the same country for generations – so the negative reaction to [black people] isn't from the outside, but from inside society. In Italy, for some people, there's still that idea that they can repel it. Segregation still feels like it is possible here, it's like, 'If we don't accept them into society, they won't stay.'"

The Sundance program worked to positive effect, even with non-actors like Seihon. Meditarranea's authentic rooting in the duo's collective realities, and their trust in Carpignano, puts the film over. "The idea was to keep the film very grounded to the character's perspective – Koudous' real experience. The decision of what to include was sort of made for me, just by the nature of what happened in his life. We thought to ourselves, 'Okay, we're going to make a film that for the first time really gives the world from the immigrant's point of view."