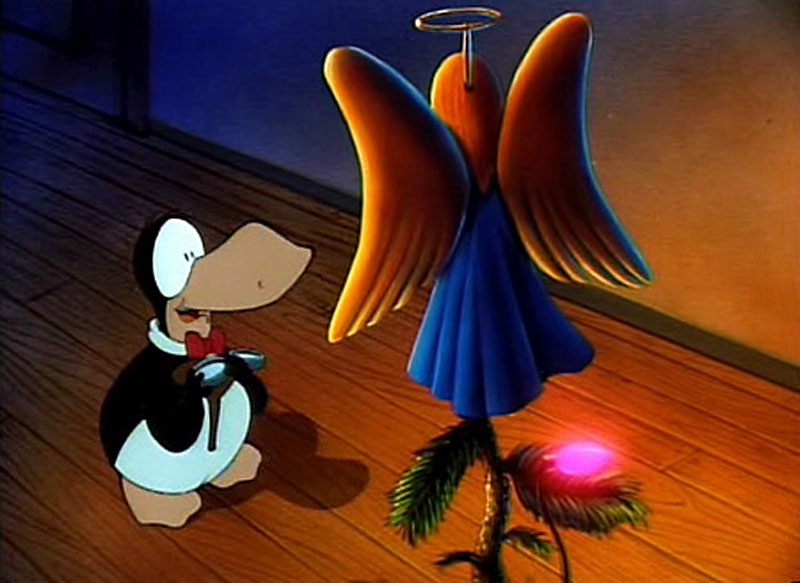 "A Wish for Wings That Work"

I can tell for certain that the holiday season is close at hand because less than 24 hours ago I witnessed a hiss-fight unfold in the Christmas cards aisle at my neighborhood grocery store. Not a major-league dustup, but more like a mad scramble for the final envelope for a particularly sappy greeting. This sort of thing is to be expected, of course, what with all the endless looping of bizarrely cheerless Christmas swill clogging the aisles and the never-ending seasonal reruns of moldy holiday films clogging basic cable. (I'm looking at you, Ben Affleck in Surviving Christmas.)

As a film critic, I can't do much about the earwormy Muzak® situation, but I can recommend a few eminently watchable, holiday-related movies for you to track down, all of which are available via locals Vulcan Video, I Luv Video, or the good ol' Internet. Trust me on this, because I've been there: Nothing alleviates the frantic, consumer-based horrors of the holidays like curling up on the couch with your bestie (girl/boyfriend, dog, Tito's, whatever) and losing yourself in some weird/funny/touching Christmas-related cinema. Save It's a Wonderful Life for your golden years – George Bailey has been resurrected enough. Let the poor schmo die already while you get back in the spirit of things with these three overlooked classics.

Now that Eighties comic-page stalwart (and former Daily Texan 'toonsmith) Berkeley Breathed has returned to doing daily strips, this animated adventure featuring iconic humanimals Opus the Penguin and Bill the Cat is an invaluable, and genuinely touching, hoot, full of dreamy animation courtesy of – you didn't guess it! – Steven Spielberg's Amblimation studio. Recommended for ages 8 to 80 and beyond.

Possibly Kim Novak's finest hour and certainly a better Jimmy Stewart performance than anything you'll find in Frank Capra's CV. Set in a beatnik-laden New York City circa 1958, Novak's a witch who sets her supernatural sights on a previously engaged Stewart. Shot with mesmerizing radiance by the great James Wong Howe and every bit the Christmas time capsule it sounds like, this frothy rom-com also boasts a fantastic turn by legendary comic Ernie Kovacs and terrific supporting bits from a very young Jack Lemmon, and a very old Elsa (Bride of Frankenstein) Lanchester. One of the most spellbindingly colorful and downright cool movies I've ever seen, bar none.

David Niven is the titular bishop who gets more than he hoped for when an angelic Cary Grant arrives to answer his prayers and help him build a towering new cathedral. The wife in question is the great Loretta Young, who promptly falls, kinda/sorta, for the heaven-sent humanist. Shot in lustrous – dare I say heavenly – black and white by legendary cinematographer Gregg (Citizen Kane) Toland, this sidesteps the maudlin for more earthbound lessons in how to count one's blessings: quite the opposite of the aforementioned Mr. George Bailey of the traditionally floundering Bailey Building & Loan.

All Wrapped Up
Holiday Film Previews

A Wish for Wings That Work, Bell Book and Candle, The Bishop's Wife, holiday films