Collaborations of Love and Pain 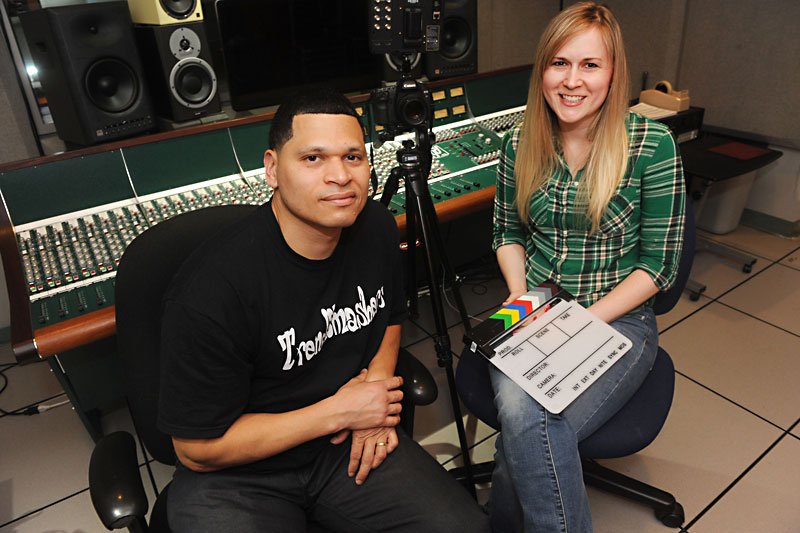 Ray LaManna and his wife, Ericka Marsalis-LaManna, are always just within the other's grasp, purposefully and dotingly orbiting around each other. In the best ways possible, they are connected, forged together by fire.

However, as she tells it, her first impression leaned toward dubious. "In high school, I was friends with his girlfriend, and he was friends with my boyfriend, so we were all in the same circle. I actually didn't like him very much. I thought he was loud and cocky, and rude. He was out of control."

"I was," says Ray with a confirming shrug and a self-reflective gaze, briefly traveling back to the recklessness of his younger days. "I was a live wire."

Ray's troubled upbringing through high school – a matted knot of poverty, single-motherhood, periodic homelessness, and criminal activity – contrasted with Ericka's, who, in fairness, survived her own trials of youth.

"Looking back," recalls Ray, "I could see I was a kid, man. Everybody looked at me certain ways, so I felt like I had to live up to those expectations – being the super thug or whatever, willing to do whatever, like a crash-test dummy."

He readily recalls a consequence-averse psychological state just before committing a transgression – felony robbery – that would leave him incarcerated at 19. "I remember thinking, 'It's probably a dangerous lick, but I don't care if I live or die.' You know what I'm saying? That was my mindset for me going out – whatever happens happens. I'd already been in and out of the house for a long time."

Upon entry to prison, like so many lost souls, he fought the demons. "Hanging with the friends, you never really have to face yourself. When you're in a single cell (where he served nine months of a five-year sentence), you're by yourself, 24 hours, every single day."

"I was working out and stressing a bit. Worried about how much time they were going to give me. At that time, they were offering me 65 years," he says, incredulously. "Here I am, I'm a 19-year-old kid, not wanting 65 years, but not even really understanding the impact of the possibility."

After a year, he and Ericka reconnected, albeit on different terms. They began to write letters to each other, which eventually led to the first fateful visit and many more.

"Even though he was in one place and I was in another, we were going through similar things as far as questioning our environments, questioning our direction and the people that we were putting ourselves around. He was the only one that understood. I was in a circle of negativity, and he was this one little bright spot which, again, the irony of where he was, right?" recollects Ericka, in a matter-of-fact tone. "We were a source of encouragement for each other. That was our common ground."

From these fertile grounds a story tailor-made for the screen sprung bearing bittersweet fruit.


The Bag Lady is an intense and personal feature, written and directed by Ericka Marsalis-LaManna. It stars Ray, an ex-con-turned-rising actor/rapper. She quickly prefaces before answering the first question: "Well, let me start by saying sometimes it gets a little tricky to talk about the film, because it is based on a true story but, because these are real people, I can't say anything about it. You know what I mean?"

Watching the film with this knowledge in hand leads to an immediate understanding of what she means. Ray's personal scabs are slowly peeled back, illuminating a rawness found in experiences found. The coarse details of Ray's real life spill onto the screen, including child abuse, his stint in prison, and dealing with demons, real and imagined.

"I just decided one day I was ready to do a new film," Ericka said. Her debut feature was the acclaimed comedy Generation ME. "I said, 'I'm just going to go ahead and make this movie. We knew more about what we were doing, which is a good thing.

The film's theme is a true-to-life mission statement of sorts, says Ericka. "The tagline that I have on the film is 'Resentment is like drinking poison and waiting for your enemy to die,' and that really is what it's about.

"There are social issues as far as single-parent homes, incarceration rates, and dropping out of high school – all of these factors that can lead to people being locked up and teen pregnancy. That was the other reason I wanted to make the film – it's not just Ray's story.

"This is a story of a lot of people."


"I drove all the way up to Dallas thinking, when I saw him, I would just see him as my old friend and I wouldn't ...," recalls Ericka with a charged pause, remembering the fall, from which she's yet to recover.

"I would just shut my emotions down, but when I went to visit him, it was like the best two-hour conversation I've ever had. Then I was like, 'Oh, I'm in trouble now,' because I knew I really liked him."

The feeling mutual, Ray turned inward, fighting for his life and a new purpose – a better life on the outside, with Ericka. "I was writing raps – I'd never done that before. I started going to college. I had to get my GED because I didn't graduate from high school. She's writing, and telling me about her college [Ericka graduated from Texas State] and stuff like that.

"I didn't want to be the guy who got out, and was just this loser," Ray said. "I was trying to keep up with her."

Today, Ray is an acclaimed rapper, a college graduate, and a budding actor, and now teaches the first collegiate-level hip-hop production course in the state of Texas, at Austin Community College.

Ray, who is of black and Latino ancestry, has beaten overwhelming recidivism odds, in a state where, overall, persons of color – particularly blacks – are overrepresented in the prison populace. Three out of four released prisoners are arrested for a new crime within five years, according to a 30-state Bureau of Justice study.

"I put out my first album, called Five In, Five Out, and on the cover, there are statistics showing overrepresentation of blacks and Latinos in prison. These are things I didn't really care about, until I became one of those people. In the movie, the sequence with the kid – everything happening to the kid, it happened to me," Ray emphasizes.

"I just didn't want to be in and out of this revolving door, so somebody's got to break the cycle."

Their story, the film, the unusual confluence of events – even the interview taking place – gives Ericka a subtle fit of shock and awe: "I was talking to Ray about how long we've known each other.

"I said, 'This is the version of us that was sitting in the prison visitation room, that had no idea that someday we would have done all this stuff, or made this film. Now, you're teaching college, and we're about to have an interview about this film, based on our life.

Ericka Marsalis-LaManna's films, The Bag Lady and Generation ME, can be found at www.trendsmashers.com. 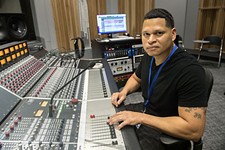 Ray LaManna, The Bag Lady, Generation ME, Five in, Five Out