Gift Guide 2015: The Joy of Watching, Reading, and Feeling

Holiday offerings for the pop-culturally minded 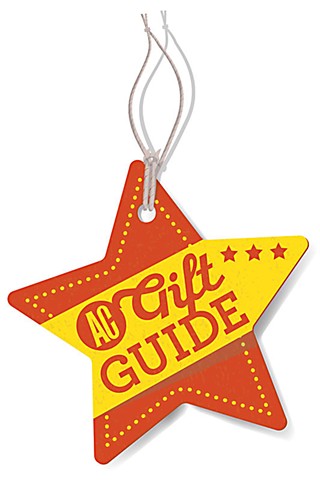 Is there a more obsessive lot than the pop-culture nerd? Meticulously cataloging the minutiae of their favorite TV shows or endlessly quoting lines from some beloved film franchise, this class of geek can be daunting to shop for during the holidays. But fear not, as the Chronicle Screens team has scoured the Internet and returned relatively unscathed with a curated list to bring happiness to the film/TV fanatic on your list. We've broken it down to three sections: bibliophilia (the love of books), scopophilia (the love of watching), and tactophilia (the love of touching things – yes, we know it's not a word, but it should be). – Josh Kupecki

How to Watch a Movie

by David Thomson, 256 pp., $24.95
Thomson is one of the most widely read film critics, but he is also the funniest and the least forgiving. So it's no surprise that his new book – his second this year alone, not to mention last year's sixth edition of The New Biographical Dictionary of Film – defies the trope of a bespectacled fuddy-duddy praising the classics of yore. Instead, Thomson, whose lovely prose bridges the gap between approachably populist and annoyingly esoteric, pulls and nips at the complex artistry in movies from the earliest historical moment to more modern films, like J.C. Chandor's All Is Lost and the 2013 insta-classic 12 Years a Slave. As always with Thomson, this is a required reading for any cineaste. – Sean L. Malin

by Vesa Lehtimäki, 176 pp., $24.99
A long time ago, in a much smaller galaxy .... Sometimes moody, sometimes playful, photographer Vesa Lehtimäki goes planet-by-planet across the Star Wars galaxy, re-creating famous scenes (and just off-camera moments) in the epic film franchise using just LEGO mini-figures. Not just beautiful, but filled with handy tips on how to create your own miniature photography. – Richard Whittaker

Cocktails of the Movies: An Illustrated Guide to Cinematic Mixology

by Will Francis and Stacey Marsh, 160 pp., $19.95
"Of all the gin joints in all the towns in all the world, she had to walk into mine." Cinematic booze! It's what unites Nazis and anti-fascist partisans, hapless Ray Milland and horrific Jack Nicholson, early-era Tom Cruise, W.C. Fields, and the ever-abiding Dude, man. Long before Bogie declared his nationality as a drunkard in seminal saucepot classic Casablanca, the movies were awash in seas of the good stuff, the bad stuff, and the stuff dreams are made of. Packed with stills and film notations, Cocktails gives you 64 recipes and then some. Here's drinking at you, kid. – Marc Savlov

$55.99
For the architecturally inclined film fan: The latest 6-disc edition of John McClane's Die Hard misadventures comes packed inside a scale model of the original Nakatomi Tower (exploding helicopter not included). For the more pastorally minded, the 48-disc remastered Little House on the Prairie comes in a cardboard little house. Love demolition? Try the latest edition of Monty Python and the Holy Grail, complete with castle and cow-throwing catapult. Fetchez la vache! – R.W.

Criterion Blu-ray, $39.95
In the age of unbelievable, static long-shots in films and television, the visual and aural influence of Austrian filmmaker Michael Haneke has become ubiquitous. Haneke is one of a handful of directors to win the Palme d'Or twice, yet he's made barely a dozen films. Code Unknown, made in 2000 but masterfully restored by the geniuses at the Criterion Collection, is in some ways his most heartbreaking. The film is a social drama about a small accident in Paris, but with Haneke behind the camera, no one is innocent, nothing is an accident, and there's no way to know how badly the characters will suffer. Given its beauty and the filmmaker's legacy, this release is a steal at twice the price. – S.L.M.

The Collected Works of Hayao Miyazaki

Amazon Exclusive, Blu-ray, $249.99
We first heard of Hayao Miyazaki back in the early Nineties when Roger Ebert gave a huge thumbs-up to the famed Japanese animator's dreamlike and unforgettable My Neighbor Totoro when it arrived stateside on VHS. Amazon has collected 11 of Miyazaki's best in this gorgeous 12-disc box set. Purists and animaniacs will dig the fact that the original Japanese audio tracks have been preserved, and newcomers to the director's films (lucky them) will be forever transformed by the likes of Princess Mononoke, Spirited Away, and Nausicaä of the Valley of the Wind. – M.S.

by Illuminidol, $15, www.illuminidol.com
For the sacrilegious pop-culture lovers in your life, local purveyor Illuminidol specializes in 8-inch prayer candles with nearly a bazillion celebrity faces to choose from – actors, musicians, politicians, and even those unique celebrities whose professional specialties just can't be categorized. Light up your home or studio with the soft, warm, spirituality-enhancing glow of Saint Bill Murray, Saint Beetlejuice, or Saint David Bowie (as the Goblin King). Maybe some Saint J-Law, Saint Leslie Knope, or Saint Mindy Kaling will help your neighbor channel her inner comedienne. Available around town or online, Illuminidol also takes suggestions. Nothing says Christmas quite like modern idolatry. – Jessi Cape

$24.95
Walking Dead mania first infected TV audiences five years ago when Rick Grimes awoke in a walker-infested hospital. The obsession is real. As real as Austin's plethora of dog lovers, in fact. Which is why Daryl's Favorite Dog Bundle is the perfect present for the obsessed. Think Daryl's wing-embroidered leather vest and a blood-splatter-blocking bandanna on the tiniest Chihuahua you know. It's so perfect, even Carl would love it – if he had a dog. Of course, if you're gifting to a cat person, you can always rely on the complete first season of the Walking Dead spin-off, Fear the Walking Dead, which answers the question: WTF happened while Rick was sleeping? A fate even worse than Sandra Bullock, it seems. – Sarah Marloff

www.shoppbs.org, $17.99
There's a list longer than the number of Lady Mary's suitors of what we'll miss when Downton Abbey shuts its doors for the final time this February. At the top, however, sits the lovely Dame Maggie Smith. Her biting wit and enviable snark has helped carry this show from quality to classic. So, in true Violet Crawley style, stay classy while saying farewell with Downton Abbey's sassy quotable mugs. It's totally acceptable to fill with wine while watching. After all, "Vulgarity is no substitute for wit." – S.M.

www.funko.com, $5-7.99
What's better than a gift you get to unwrap? A gift you unwrap twice. Funko's range of blind-boxed mini figurines comes with double the anticipation, as you peel open the wrapping to find out which collectible you got. Godzilla? Catwoman? Toothless? With every fan fave from Game of Thrones and Fallout, to Disney princesses captured in adorable two-inch vinyl, they've got your fixation covered. And who doesn't want a tiny Alfred Hitchcock in their stocking? – R.W.

During the holidays it's important to help those in need, and there's few needier than slavishly overworked and criminally underwatched local filmmakers. Thankfully 'tis also the season to not leave your house, so cuddle up with one of these five homegrown titles. – Dan Gentile 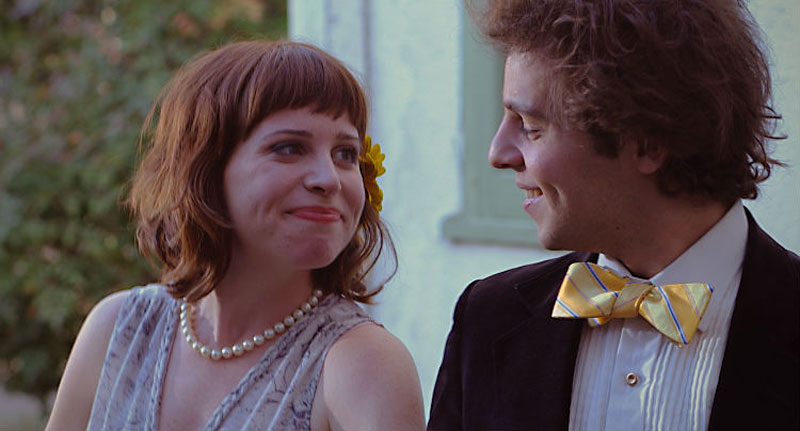 For those looking for more musings on late-20s relationship ruts after bingeing Aziz Ansari's Master of None, Steve Mim's comedy filters marital nervousness through a distinctly Austin lens with a touch of puzzle-solving mystery.
Available via iTunes, $19.99

Before Portlandia put a bird on everything, this sitcom brought Central Texas weirdness to a national audience via MTV. Don't settle for a YouTube stream; support the cast and purchase an autographed DVD from star Howard Kremer.
Available via www.howardkremer.com, $39.95

A true athlete savors the thrill of victory, dreads the agony of defeat, and also enjoys a good dick joke, as proven in local writer Bradley Jackson's intramural football comedy.
Available via iTunes, $11.99

Best of On Story

A perfect stocking stuffer for budding screenwriters, the best interviews from the first three seasons of KLRU's venerated program are now available, with uncut discussions with luminaries such as Sydney Pollack, Shane Black, and Damon Lindelof.
Available via www.austinfilmfestival.com, $15 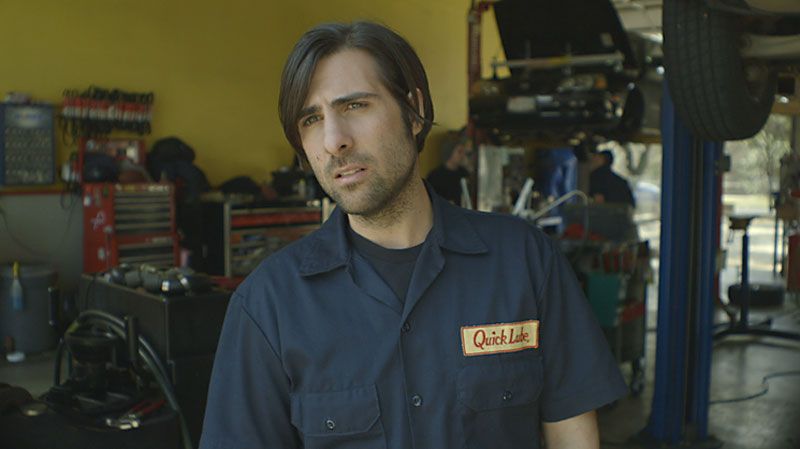 Local mumble legend Bob Byington's latest film follows slacker Jason Schwartzman as he learns the ropes at his new auto shop job. Will his beautiful supervisor return his affection? Will he learn how to change oil? The answer to both questions is probably no, but the film's easygoing charm is sure to delight.
Available via iTunes, $9.99