Star Wars: The Force Awakens Gets the 3-D Treatment From Zebra Imaging

These are the holograms you're looking for 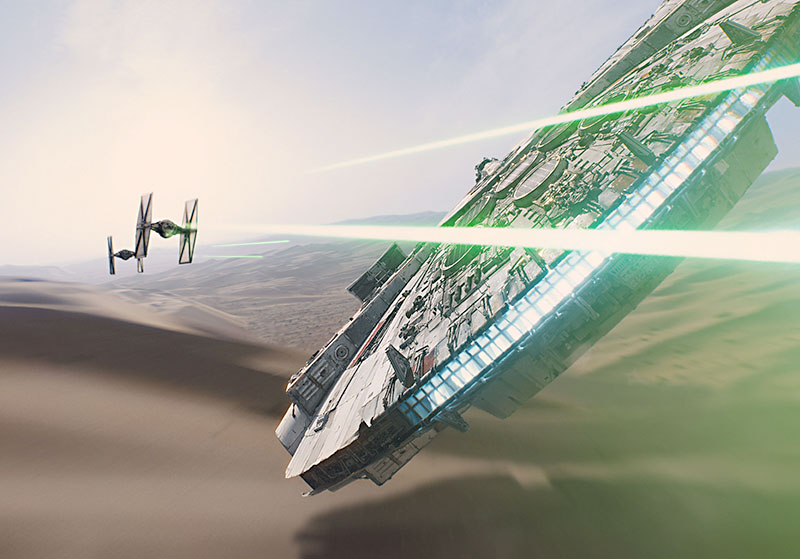 Say "hologram" and the inevitable image is of R2-D2 in Star Wars, projecting a blue-tinged miniature Princess Leia. According to Craig Newswanger, CTO and resident holographer for Austin-based hologram company Zebra Imaging, "The idea of being able to project a hologram came out of that, and everybody's been trying to achieve something close to what people expect it to be."

The circle is now complete, as Zebra has been licensed by Lucasfilm and Disney to create holographic prints inspired by the upcoming Star Wars: The Force Awakens. But wait: resident holographer? "That is a thing," said Newswanger. The roots of the technology stretch back to 1947, when Nobel Prize-winning physicist Dennis Gabor first developed the idea of printing a three-dimensional image on a flat surface. By 1960, scientists had perfected lasers that would capture a moment in time: By 1967, the technology had been refined to the point of creating a human portrait. Four years later, Newswanger – then a high school senior – saw his first hologram. "I just couldn't figure out how it worked, and I was just fascinated."

The term "hologram" is so often misused. It's not a specific technology, but the end result – a true 3-D image. That means the famous hologram of Tupac Shakur wasn't a hologram at all, but a modern twist of the Victorian stage effect called Pepper's Ghost. Newswanger said, "If you walked on the stage at Coachella, you'd go, 'Oh, there's a screen on the floor. Oh, there's a big mirror. Oh, it's flat.'" It's a pretty trick, but it's not what Newswanger or his fellow holographers are trying to achieve. "We're enamored of this idea of true 3-D, and trying to get it into the world in a useful way."

That's been a struggle. Holography was the preserve of artists for decades. More recently, firms like Zebra have worked to find practical commercial applications, and maps are the leading application. Newswanger said, "It's a way of putting a scene or a situation in front of a group of people, and having them intuitively understand what's going on." Their growth market for this service has been the military and government. Newswanger said, "There was a proliferation of capturing methods which allowed them to capture lots of 3-D, but not lots of ways to put it in front of people." In the last few years, that side of the business shrank due to the federal sequester. However, unlike many government contractors, Zebra has diversified enough to survive. For example, architects and designers are increasingly using the technique to pre-visualize buildings and developments, using the technology to strip away walls and floors. "It's another way of getting straight into the brain. Rather than looking at 2-D maps and having to extrapolate and build it in your mind, you just see it."

But the art side has not disappeared, as proven by the licensed The Force Awakens holograms (to be followed, if successful, by sports and pop-culture prints). While they won't be stored on an astromech droid, they're still a technological marvel. Instead of the old technique of painstakingly capturing a subject from every angle with 35mm film, the images are created digitally, and each acrylic print will carry as much data as the actual feature film. Then there's Zebra's dedicated hologram stand, which is more than just a frame: Newswanger called it "a device that illuminates the hologram perfectly, without setup. You just open it up, and there it is."

Ultimately, what Zebra creates is a single, static, but incredibly complicated image. Will the world ever communicate through moving holograms, like Emperor Palpatine instructing Darth Vader? According to Newswanger, the active display isn't just imminent. It's already here. He said, "We've built four, and they're currently being tested."

A version of this article appeared in print on December 11, 2015 with the headline: These Are the Holograms You're Looking For