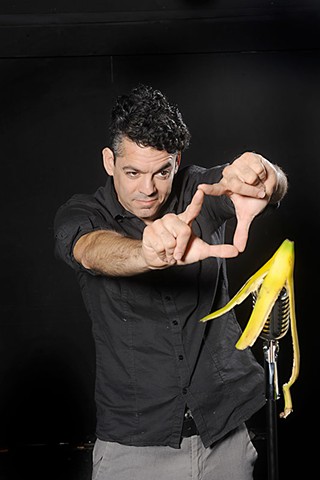 Last time we told you about local comedy mover-and-shaker Brently Heilbron, it was because of his emo puppet band, Fragile Rock. This time it's because of his new show on PBS: Stand Up Empire.

Heilbron's entertainment company Brently Artists and Media has teamed up with Devolver Digital and Heard Entertainment to bring the popular weekly open-mic show to Austin's PBS affiliate – and who knows where it will go from there?

"It'll air on KLRU," says Heilbron, "and they'll help out with gaining a nationwide audience for it. It kinda works on a tier system."

But, wait: This is just some comedy open-mic show? Even at a venue as sweet as the Empire Control Room; even if it somehow boasted the best comics in town; still, it's only that the usual weekly gig's gonna be filmed and then broadcast as a series of episodes? Is that the whole –

"No," says Heilbron, shaking his head emphatically. "No-no-no, that's not what we're doing. This is more of an Austin City Limits kind of thing – but for comedy. It's a half-hour show, with two comics featured per episode, and two segments about them. And then there's a third unrelated segment – about the comedy scene in general, or about the Bill Hicks Wildlife Foundation, or, eventually, that documentary about the Funniest Person In Austin contest that Katie Pengra and Dustin Svehlak of Voltaic Video are working on. Just whatever we can do to showcase what's going on in Austin."

Because Austin's so damn important?

"It is important," says Heilbron. "It's an increasingly important scene. I mean, you always have to tour, right? But if we can create more work here, where there's queso, so much the better."

Austin Chronicle: Do you think your pitch might've been accepted more easily because Brian Gaar's got that ATX Uncensored-ish show going on the CW now?

Brently Heilbron: That didn't come into play specifically in our conversation; they never mentioned it. But I would imagine that it played into the decision. ATX Uncensored-ish shows that these things are possible in the Austin scene. Gaar's show is different than what we'll be doing, of course, but it's fantastic that it exists – it shows that there's cool things happening in the local scene.

AC: And the comedians you're gonna showcase, they're not just anyone who walks in from the street for the open mic, right? You're, what's the popular word right now? Curating who's featured?

BH: Yeah, and I wanted to have as many diverse voices as possible – in terms of ages, colors, genders. I think it's super-important to show the variety of styles in Austin, and every aspect of it. So, I mean, we've got Saffron Herndon, who's 10 years old – and she's fantastic. And we've got Kerry Awn, who's, ah –

BH: Exactly. He's been a legend since the Armadillo World Headquarters days. And we've got Chris Cubas, Kerri Lendo, Lisa Delarios, Daniel Rugg Webb, a bunch of people, just the funniest people around.

And make note, citizen: All of them will be performing at a live taping for the Stand Up Empire pilot and the first six episodes at the Empire Control Room on Sunday, Dec. 13, 6pm. See www.standupempire.com for tickets and info.