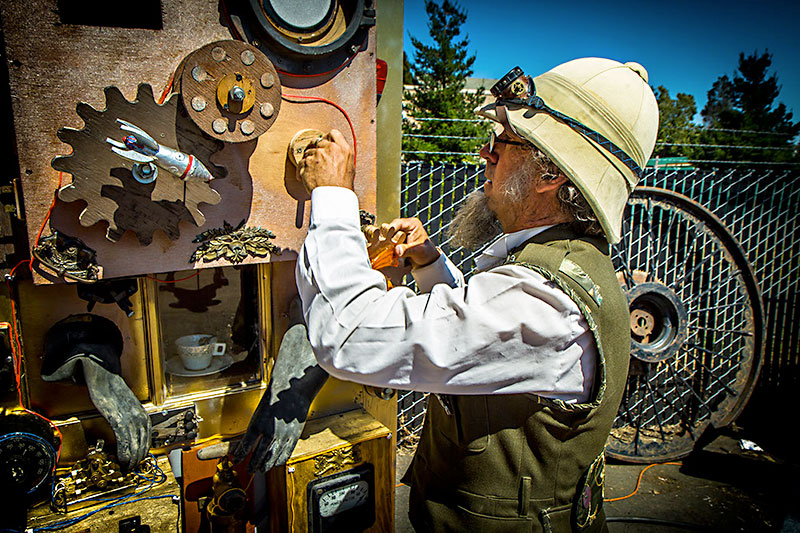 It began with a dinner invite. Filmmaker Byrd McDonald knew nothing about steampunk, but after one meal, he was on a path to craft a documentary about the movement. He said, "More than anything I've ever made, this film came to me."

The invitation came courtesy of McDonald's friend James Carrott: He was working on a book about the retro-futurist subculture, and asked the filmmaker to record a dinner party. For fans of the fantastical Victorian genre, the guest list was a who's who of novelists, artists, musicians, engineers, and designers at the scene's practical and philosophical cutting edge. Yet McDonald had no idea who they were, or even really what steampunk was. He said, "On the drive up to Seattle from Portland, I read the Wikipedia entry, and that was the end of my knowledge."

McDonald quickly found this was more than a literary or cinematic genre, and there was definitely more to it than hot-gluing some cogs to a top hat. As he played fly on the dining room wall, he said, "My jaw hit the floor. I was just absolutely fascinated." While he was initially struck by the retro-fashion, he found unexpected depth. "This was about history, it was about science, it was about engineering, it was about technology, and it was certainly about science fiction."

That gathering became the spine and the inspiration for his documentary, Vintage Tomorrows, receiving its Texas premiere as part of Other Worlds Austin. While initially attracted by the iconography of airships and steam engines, McDonald said he was most fascinated by what it says about our modern relationship with technology, as artisans try to re-humanize sealed box machinery. In an era of near-disposable iPhones, unfixable by the average user, steampunks make leatherwork and metallurgy an act of cultural subversion. He said, "[Steampunk] is a reaction against how passive we are today, in a world filled with technology, where we all have so many screens, and we all sit at our little terminal and type, type, type. A lot of the people I respect the most, they're people who are sick of being passive, and they actually want to make stuff."

McDonald's film chronicles the ongoing battle for steampunk's soul: As its imagery pops up in Hot Topic and Justin Bieber videos, the historically fringe movement struggles with being accepted and appropriated by mainstream culture. Not that it's new: As a literary genre, the first examples date back to the Fifties. For years, it remained underground, McDonald said, "and then the Internet happened, and these people were able to find each other." That tight-knit community became a documentarian's dream. "I walked away from every interview with a list of 15 more people that I was meant to find out about, discover, read their work, see their work."

Thu.-Sat., Dec. 3-5, at the Galaxy Highland theatre (6700 Middle Fiskeville). Badges are $60, and single tickets ($10) are available 15 minutes before showtime. For the complete film schedule and other info, see www.otherworldsaustin.com.