Stroke survivor Robert Reyes gets another lease on life 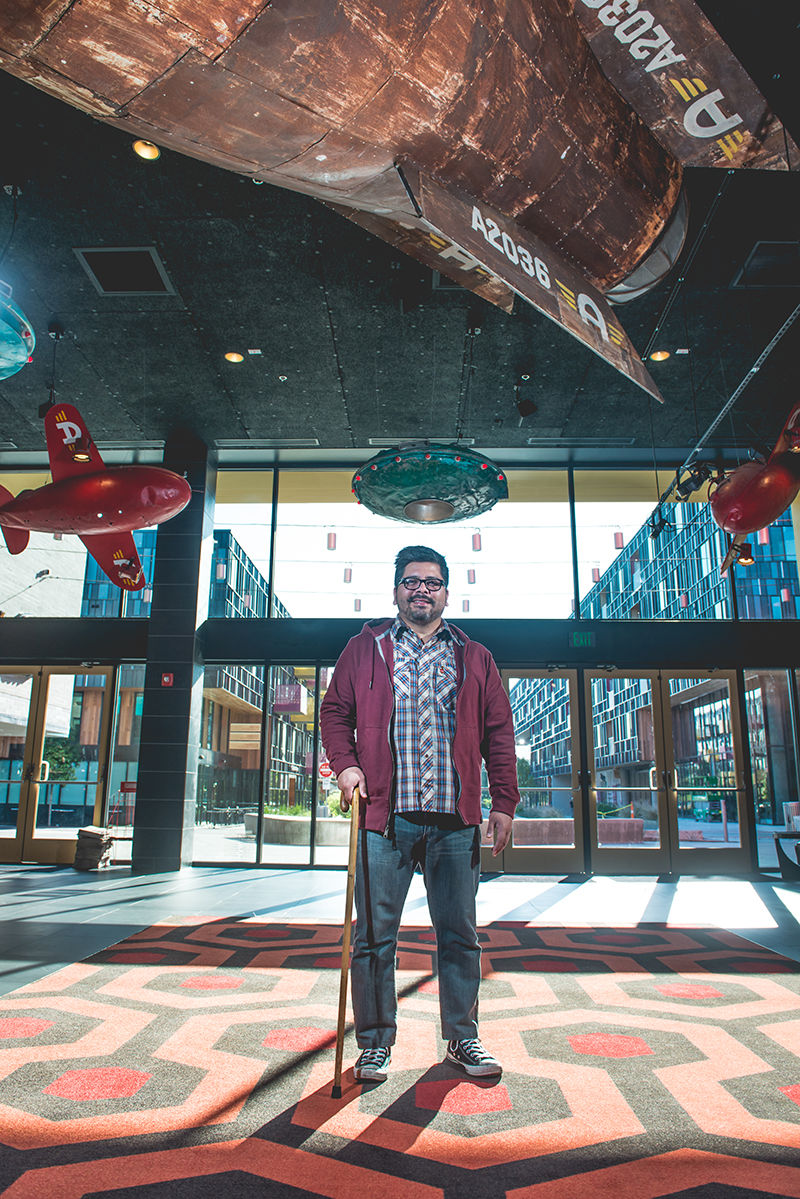 Robert Reyes woke up hung over. The 37-year-old knew well the feeling, and soon a couple of breakfast tacos were swiftly administered. Late on a sunny afternoon in April, as he was home checking his email before his manager shift at the Alamo Drafthouse Ritz, he started feeling an odd sensation in his head. "There was this weird pain in my brain that I had never felt before," recalled Robert. "I took a shower to try and get rid of it, and as I was getting out of the shower, I clipped my foot on the edge of the bathtub and almost fell down. That had never happened to me in my life. That was the moment I knew there might be something serious going on." As the whole left side of his body became numb and he started vomiting up his lunch, Robert made two phone calls: one to his brother Ric and one to 911. Instead of spending the night overseeing two sold-out Master Pancake shows, Robert spent the night – and the next 35 nights – inside a hospital room, coming to terms with his new reality.


Back in 2001, Robert was a waiter at Matt's El Rancho when he went to the old Colorado Street Alamo Drafthouse for the first time. "I went to see a Spike & Mike show there, and my server was pretty cute, and I thought, 'This would be a cool place to work.'" This was the early years of the Drafthouse, when founders Tim and Karrie League oversaw the whole operation. "We were very much a family unit back then with only 30 employees and one location. The line between employee and employer was often pretty blurry," said Tim League via email. Robert added, "At the time, we had no idea that this little theatre was going to turn into the national empire it is now. We were just a bunch of twentysomethings having fun and showing odd movies for the cool kids."

When I moved to town in 2003 and got a job there, Robert was one of the first friends I made. We bonded over a love of comic books, Eighties action movies, and sci-fi. As the Drafthouse flourished, Robert became not just beloved by his co-workers, but by the patrons as well. "It was a tight-knit community. All the regulars were really nice and sweet. We all grew up together; it was a great time," Robert said.

Austin was growing, too, with a seemingly endless influx of new residents in the creative class and service industry. Every night there were parties, concerts, bike rides, and of course, vices. "Austin gives you every opportunity to never grow up. In this city, there's so many options to do so many things, and I had opted to do all of them. It's a lot to put a body through, and I had been doing it for 15 years," he said. Staying up till 5am most nights started to take its toll. "Over the last year, I started feeling run-down, I'd get nosebleeds and piercing headaches, but I just thought it was due to being hung over." Robert knew his family had a history of high blood pressure – he was diagnosed with it in 2011 – but like many people, he ignored it, thinking that riding his bike all over town with his friends would be enough to balance his reckless lifestyle. "I'd made the decision to change my life around and get healthier, but it was too little too late. I wasn't able to correct course in time, and my body decided to just shut down."


Robert had suffered a hemorrhagic stroke: An aneurysm had ruptured in his brain. "The doctors showed me a CAT scan and where the aneurysm was," recalled his brother Ric. "It was really close to his brain stem, and it was big." The doctors told Ric that the next 48 hours were going to be crucial to Robert's survival. "They said the aneurysm could move to the brain stem and cause him to become brain-dead. That was their best-case scenario at the time. It solidified that this whole situation was out of my hands. There was nothing I could do for him, except be there for Robert and my family," said Ric.

"I knew things were bad," Robert said, "but at the time it was happening, I had this feeling of 'I'll never die, I'll never grow old. I'm going to be back to work next week.' I think I was being a bit naive." After a weekend of relentless monitoring (Robert remembers a doctor with a defibrillator at one point), the aneurysm stayed in place. Less than a week after his admittance, the latest Stars Wars trailer was released. He and Ric huddled over a laptop watching it on repeat, Robert in tears.

After three weeks in the ICU, Robert was transferred to St. David's Rehabilitation Hospital, where he would begin the arduous journey of recovery. His whole left side was unresponsive, he had double vision, and he struggled with speaking. The Reyes family also faced mounting medical bills, prompting Ric and Robert's friend, Blair Stirek, to start a GoFundMe page. Robert still can't believe how supportive everyone was. "Most of my friends don't have high-powered jobs. They're bartenders and service industry folks, so giving $20 is like giving away your H-E-B money." The GoFundMe page raised more than $17,000 in just two months. "I'm glad the funds were there to help pay for hospital bills and not funeral bills," he joked.

The generosity extended beyond just cash donations. Ric organized volunteers to build a wheelchair accessible ramp to Robert's apartment and outfit his bathroom with metal grab rails. Friends signed up to make meals and deliver them to Robert's family while he recovered. People from all of Robert's various social circles banded together to support their friend however they could. "It was overwhelming," Ric said.

Rehabilitation was slow at first, but he had his relatively young age on his side and a fierce stubbornness to get his life back to some semblance of normalcy. When he was discharged from the hospital in mid-May, he was in a wheelchair and going to therapy three times a week. By early June, he had moved on to a walker. Two weeks later, he switched to a cane. His eyesight was slowly correcting itself, and his speech was getting clearer every day. His swift recovery continued to surprise his doctors. He was back to reading comic books, and watching Murder, She Wrote, but something was missing.

"I really thought I would never ride a bike again," Robert said. Enter Bob Whitford, a senior occupational therapist, and a member of Robert's rehabilitation team. "I'm the bicycle guy around here," Whitford said. "Anytime a cyclist is in need, I use that as a carrot to engage them." Coincidentally (or was it kismet?), a friend had recently donated an adult-sized tricycle, and Whitford spent a weekend fixing it up. He told Robert he was going to bring something over to his house. Whitford said, "At first he was a little hesitant. He said, 'I don't know if I can do this.' I said, 'Well, just hop on and see how it feels.' So he gets on the bike and rides down the street about half a block and turns around to come back. Right then, his parents drive up for a visit, and I look through the window, and his mom is crying. I don't think she knew how far he had come."

Robert continues to make strides in his recovery. When he was discharged, he kept a calendar on hand to record his milestones, however small. Sample entries: "tied shoe," "peeled a carrot," and then as the months go on, "drove car," and "walked a mile with cane." A recent entry – "back to work!" – meant having to figure out his new role at the Drafthouse, since going back to working the floor at the Ritz was not an option. He now works at the main office, helping with social media and writing copy for the Alamo's website. As League said, "Robert was always there to give me honest feedback and wanted to make sure we kept true to our initial philosophy and ideas about the business. One of those ideas is to take care of your staff when they are in hard times. And Robert certainly had some brutally hard times this year. I'm happy that Robert was able to pull through it, continues to make progress toward a complete recovery, and is now doing great work for us in a completely new part of the company." He added, "He's an inspiration for us all to stay positive even when life is punching you in the face."

The Force is strong with this one.