A Triptych Bathed in Blood

A contemplative former outlaw, a compassionate nun, and a devoted government agent. In Kingdom of Shadows, these three uniquely educated perspectives and vantage points are found inextricably laced together by bloodshed and fatalistic narcoma. Documentarian Bernardo Ruiz (Reportero, PBS series The Graduates) skillfully weaves together not only those three stories, but also the more subtle conditions that plague Mexico's "narco-states."

"One thing that I had wanted to do for a long time was try to make a film where I would include a kind of chorus of voices, rather than just have it driven by one person. I really like the idea of braiding together three stories or creating a triptych," explains Ruiz.

The film's driving force, aside from its imminent direness, is the bravery of Sister Consuelo Morales, a nun who works to help relatives (mostly women) of over 23,000 people (mostly men) who have disappeared since 2007, a number journalists and activists believe to be much higher. "She's the beating heart of the film. I think her story speaks to what is happening in Mexico right now," says Ruiz.

"She's doing it in the context where she has received death threats on multiple occasions. She's been followed. But what's important about her is she's just trying to get the existing system to work."

This system – the Mexican government, especially in the narco-states – is shown corrupted on most grounds, proving to be as problematic as the cartels. In fact, there's a subtle complicity found in the poor organization and even poorer execution of Mexico's anti-cartel remedies.

In one interview, Ruiz talks to an employee of an agency formed specifically for the unusual disappearances. Clearly being willfully oblivious, he seems bent on presenting every other possibility for these cases, attempting to blanket cartel dealings with random runaways.

Ruiz illustrates this blinding problem: "It's a little bit like looking into the sun, right? Nobody wants to look straight into the sun, because it's too powerful, so people will do everything they can to talk around it. You have someone whose very job it is to investigate, collect evidence, and help build cases against organized crime groups, but he himself doesn't even want to name, doesn't want to directly address, what the issue is."

There are some gory details in the likely death and disposal of the disappeared. "Five gallons of diesel will disappear you off the face of this Earth," explains a masked member of the insurrectionist Zeta Cartel. Federal agent Oscar Hagelseib, one of the film's primaries and most direct voice, says he felt safer working top-level details in the Middle East.

However, some of the most prescient material in the film comes from former drug runner Don Henry Ford Jr., a Texan who found himself, like the Mexicans, trying to improve his financial footing. "The drug business can't be looked at under a microscope, you need to look at it as a picture of a larger puzzle," he explains candidly.

"The real underlying cause is poverty. The fact is you can't make money subsistence farming in Mexico. They're born into a certain station in life, and they can't get out of it – if you're born poor, you'll die poor. It's just the way it is."

The film's overarching message conveys a fragile, tear-blurred hope and resolution. Ultimately, the disappeared and the women fighting for them – like Virginia Buenrostro, the mother of disappeared children – come front and center.

"At the beginning, I didn't want to show my kids' faces [for fear of repercussion]. But, if they come back – and ask me, 'Why didn't you look for me?' – how could I say, 'I didn't look for you because I was afraid'?

"If I don't search for them, I'd feel like I'm burying them." 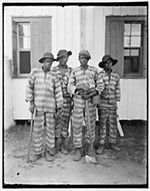