Labors of Love (and Money) Like a lot of folks in Austin these days, Alan Berg is worried about the rising cost of living and its implication for artists of all stripes. "I'm protective of the Austin that we came down to in the Eighties," he says. "Creators are our DNA. That's who we are as a city. If we lose that, we're just a second-class Dallas."

However, unlike most who lament the ways Austin has changed in recent years, Berg is actually in a position to do something about it. As president and co-founder, with his wife Kristin Johansen-Berg, of Arts+Labor, a "creative content community" with 31 full-time employees and a stable of 50-100 contractors, Berg is in the business of providing livelihoods for many of the creative people who make Austin a thriving cultural hub. This year, Arts+Labor was credited on five films that screened at SXSW, including Berg's own The Jones Family Will Make a Way. Last year, the company had two feature films and two shorts at Sundance. Filmmaker collaborators include Kat Candler, writer/director of indie hit Hellion; John Cassavetes Award nominee Yen Tan (Pit Stop); and Emmy-winner Heather Courtney (Where Soldiers Come From). Commercial clients have included Dell, Adobe, and Shiner Bock.

Berg is not content to rest on his considerable collection of festival-circuit laurels. He's plotting to expand all three aspects of Arts+Labor's business – film, episodic, and branded content – but sees the last of these as the engine of growth. That's what pays the rent, both for his business and for the dozens of local artists who depend on Arts+Labor to make a living. "We want people to be able to stay here and create here and afford to live here," Berg says. "That means being able to migrate between commercial and pure creative endeavors. It also means we're constantly trying to expose brands, which are looking for new ways to reach consumers, to the creative voices we have here."

That's where Executive Creative Director Amos David McKay, Berg's latest hire, comes in. McKay joins Arts+Labor from Atlanta, where he worked for BBDO, one of the biggest advertising firms in the world, and led campaigns for AT&T, among other corporate clients. He sees Arts+Labor as ripe with possibility for a rapidly shifting advertising landscape.

In fact, he says, the Arts+Labor model is one that big ad firms are now struggling to imitate. "You can already see that agencies are hiring directors and [directors of photography]," McKay says. "Agencies are noticing that big clients are parceling off their projects to smaller content companies, because to them it's a one-off thing. They don't have to invest a lot of time or effort or money into it, and if it works, it works. If it doesn't, it just sort of fades away and wasn't a big investment to them. That's something we're trying to tap into, going directly to clients – as well as working with agencies, but it seems like the agency model is turning into one that would compete with us."

McKay was drawn to Arts+Labor for its potential as a one-stop branded content production house where directors, editors, graphic artists, composers, and other necessary film artisans are all on staff, ready to pitch in. But more than anything else, McKay was drawn to the position by Austin itself – in particular, the laid-back, creative Austin that Berg sees himself as defending.

McKay recalls working on an AT&T GigaPower commercial shoot in Austin about a year ago, when he was still based in Atlanta. The casting was a who's who of local Austin celebrities – musicians, business owners, filmmakers, and resident weirdos. McKay hadn't brought a script to audition people with. He and his collaborators just asked each celebrity what he or she loved about Austin. McKay was struck by the camaraderie in the area outside the casting office. "We had a whole hallway full of people talking to each other who were basically friends," he says. "In that three-week period that we were shooting, I pretty much decided that this was where I wanted to be. It felt like home."

McKay speaks glowingly about his new friends and co-workers at Arts+Labor, from Mac Blake, senior copywriter, stand-up comedian, and winner of the 2014 "Funniest Person in Austin," to Cody Ground, editor/composer and member of experimental rock outfit Royal Forest. A few weeks ago, Ground debuted a promo video he directed for United Way featuring Austin musicians like Shakey Graves and Kelsey Wilson of Wild Child. "If we want a custom piece of music, he could compose a piece of music," McKay says of Ground. "But he's also editing, and he also directed the United Way thing. It's really exciting to have so many tools at your disposal."

Now, McKay's mission is to find the income streams for Arts+Labor that will directly sustain the kinds of eclectic art-makers who drew him to Austin and whom he's excited to have on staff. The secret seems to lie in branded content, a mystery that he's still unlocking. "It's a big question mark for everybody. Anything could be content, anything could be branded, and there are so many levels of that. Do we have a piece that we've already made and sell that to a brand? Do we go to a brand first and say, 'Hey, we have this idea, do you want to be integrated into that?' I'd love to figure out what that formula is and get it out into the world."

Regardless of the progress of the branded content initiative, Berg says, Arts+Labor will continue to produce high-quality "pure creative" work. Upcoming projects include Austin Chronicle Editor Louis Black's untitled Richard Linklater doc and Sundance/SXSW veteran Clay Liford's teen-fan-fiction-themed comedy Slash. Berg is dismissive of the idea that a focus on building out a commercial client list will distract his employees and collaborators from their passion projects, pointing to the well-known Austin musicians who appeared in McKay's AT&T GigaPower TV ad. "When we were growing up, the worst thing you could accuse a band of doing was selling out," he says. "Now, it's the only way for a band to make any money – get a song in a car commercial. You can't sell an album. Maybe you can make a little by going out on tour. I think that boundary is just really blurry right now."

In the end, for Berg, it all comes back to fostering the creative community that drew him here from North Texas three decades ago. It's a challenge that hits home for Kristin and him in particular. "Our daughter and her boyfriend, both practicing artists, left Austin to go to Denton where they could get a studio for $100," he says. "Our son is a film student at UT. We want him to be able to stay in town." 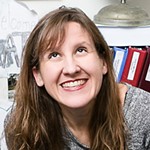 On the Inside Looking In
The meta world of 'Outside Industry,' Alan Berg's new documentary about SXSW, coming soon to SXSW