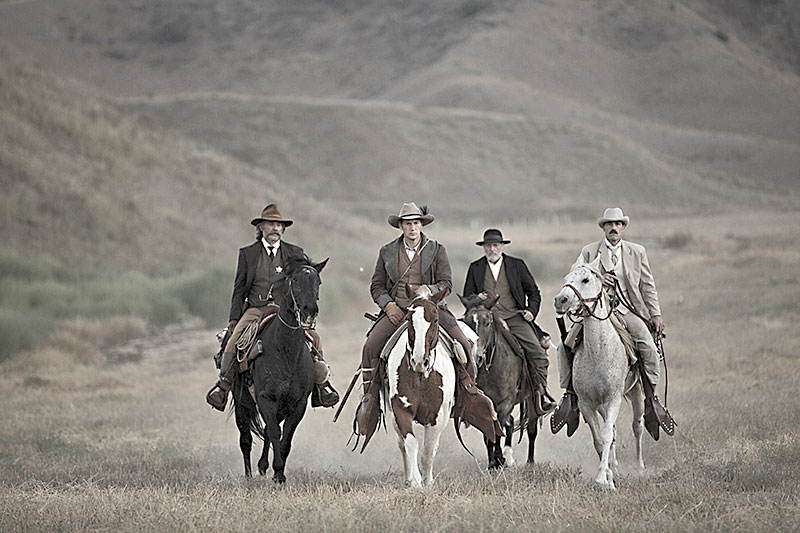 When S. Craig Zahler started writing Bone Tomahawk, he wasn't creating a revisionist Western just for revisionism's sake. He wanted to focus on the blood and heart he so often found missing from the genre. He said, "A lot of what I do comes from not having the satisfying experiences I want."

Zahler's obsession with tales of the range began a decade ago, when New York's Film Forum ran a series of cowboy movies on 35mm. "I saw a ton of classic Westerns there, and a fair amount of not-good stuff," he said. "Watching all the ones that didn't work, I started wondering what would work better." He had a similar experience when reading Cormac McCarthy's novel Blood Meridian. He said, "I know this was a cherished treasure, but it was the same thing. This was lacking heart and characterization."

Bone Tomahawk is Zahler's cinematic reaction to what he felt was missing from those other works, and is wholly his own twisted creation. Part The Searchers, part Cannibal Holocaust, it sets a small-town sheriff (Kurt Russell) on a rescue mission into the desert after three townsfolk are kidnapped by flesh-craving troglodytes. Yet this isn't some simplistic cowboys and Indians trope, as the settlers find something terrifying in the dunes.

This may be his first feature, but Zahler's no newcomer to movies: An established cinematographer, he's also a novelist and scriptwriter. He drafted Bone Tomahawk specifically as his directorial debut, shaping it to fit the budget he knew an ingénue director could expect. However, he was not prepared to shortchange his vision, stating that "I didn't write this to propel my career as a director. I am directing this to properly realize something I wrote." Before production began, he clashed with producers fixing to hobble his creation into something more palatable for the multiplex. He said, "One company in particular, we got to the point where I went, 'If you ask me to cut one more page, I'm walking away from the movie.' And it's not just because I'm an asshole – although there are certainly many people who will tell you that. It's because, if I'm going to bother to do this, and live this experience, I need to believe in it 100 percent."

Not only did Zahler write and direct, but he also wrote the soundtrack. Aside from his burgeoning cinematic and novel careers, he's half of "epic metal, slightly doom metal" band Realmbuilder, and recruited musical collaborator Jeff Herriott to help score the film. Zahler said, "He's a music Ph.D., and so I thought, 'I can come up with melodies, and he can orchestrate it.'" However, like the barren landscape through which the sheriff and his party trek, he kept the score as spartan as possible. "I don't want to tell you it's emotional with emotional music to put frosting on there for you. If it doesn't work for you, it doesn't work for you."

His vision of the Old West is merciless, and although he spares the musical notes, he's not afraid of the gore. While the drama is inspired by the greatest of the white-hatted cowboy genre, the troglodytes' butcherous ways are directly inspired by the only film that was so shocking he could not complete it in one sitting – Men Behind the Sun. The infamous Chinese war atrocity movie is famous not just for being so explicit, but because its camera concentrates so clinically on what the bloodshed means for the characters. Zahler said, "That super-dry presentation of violence rattled me in a way that nothing else has."