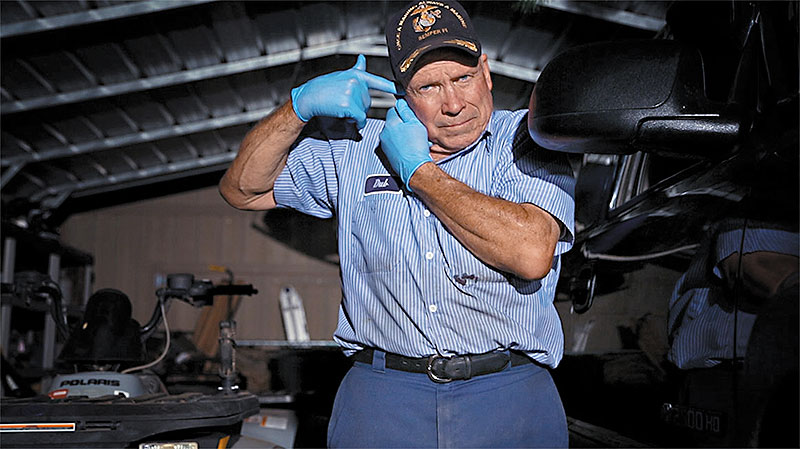 "As a law enforcement officer, my fundamental duty is to serve mankind; to safeguard lives and property; to protect the innocent against deception, the weak against oppression or intimidation, and the peaceful against violence or disorder; and to respect the Constitutional rights of all men to liberty, equality, and justice."

Before he was the subject of the documentary Peace Officer, William "Dub" Lawrence was sheriff of bucolic Davis County, Utah, and he would make every new rookie and deputy recite that first paragraph of the Law Enforcement Code of Ethics. Yet instead of a commitment to the Constitution, now he sees the fog of war settling on America's streets. In 2008, his son-in-law Brian Wood was killed by police officers after a 12-hour standoff on the driveway of his home. That could have broken a lesser person, for Lawrence had formed the very SWAT team that shot his kin, back when he was sheriff in 1975. Instead of folding, he turned his years of investigative experience into exploring how a domestic violence call-out became a siege that resulted in his relative being executed in front of his house.

“This country does not need to do some of the things we’re doing that degrade humanity, that destroy human life unnecessarily, that violate the very principles that made us a great country that we have the potential of being.”
Yet there's no rage in his voice when he talks about that horrible day. Instead, he talks with the measured calm of a former small-town cop, a guy who literally once ticketed himself for a parking violation. He said, "Initially, we were given some information that was erroneous." For 22 hours, the official line, repeated ad nauseam by the local newspapers and all five local TV stations, was that Wood shot himself in the chest. Then the chief of police revealed a SWAT officer shot him. Then the attorney general's office claimed Wood shot first, and the sniper just returned fire. "First it was suicide, then it was suicide by cop," said Lawrence. "I had to know the truth."

The fact that his former comrades, people he had known and worked with, were circulating three different stories, all of which made his son-in-law look like the aggressor, disturbed both Lawrence the family man and Lawrence the ex-cop. He said, "I looked at the evidence, and realized how much evidence the police had left behind. A lot of that evidence should have been incriminating, or should have told a different story." He fought for years to get the records of the day – the incident reports, the extensive video footage, ballistics reports, even the autopsy – released. When he finally got them, the proof was there. He said, "We learned that it had indeed been a takedown operation, initiated by the SWAT team."

For Lawrence, it's not just one death, even though it was so close to him. Policing has changed, siege tactics have become standard operating procedures, and the war on drugs has become a war on citizens. He said, "I don't have any problems with having the ability to defend the people against any enemy, foreign or domestic. That's part of our system. ... But to find some reason to use it on a routine basis changes the whole idea of law enforcement, [and] it's not just Utah. It's not just our state, or an area of our country. It's our entire country."

So how did the SWAT unit that he formed, which never took a life or lost an officer under his leadership, become an entity that escalated incidents, rather than resolve them through negotiations? And why were civilians accepting this? A former Marine as well as an ex-cop, Lawrence saw the "shoot first, ask questions never" attitude as part of the same slippery moral slope that gave legal cover to waterboarding, and that shift happened so imperceptibly slowly that no one noticed. Peace Officer co-director Scott Christopherson, an assistant professor in documentary film at Austin's St. Edward's University, explained, "The militarization of police isn't really as much about equipment, but it's as much a cultural issue for me. It's about us versus them, and not being a part of the community."

As filming progressed, it became clear that Lawrence was not alone in this trauma. By October of last year, there had been 41 cases in that one state, and the number has risen since. Because he could empathize with those other families, and could help them find their own answers in their own cases, he became the film's gateway to these other stories. As the survivors' ranks grew, co-director Brad Barber said, "You get the sense of how disproportionately often this kind of thing happens."

Lawrence – "Dub" to his friends – seems like a man out of time, like a Norman Rockwell portrait of President Dwight D. Eisenhower. Barber called him "a very altruistic, idealistic person. He literally grew up in Mayberry, North Carolina, and will tell you that's the model he based his police work on, the television characters from The Andy Griffith Show, and the friendly, calm way they interact with their communities." But looks are deceptive: Like President Eisenhower in his famous 1961 speech warning about the military-industrial complex, in Lawrence's case, it's the dangers of militarizing the police. Yet Christopherson admits that he wasn't really aware of that bigger story until he and Barber started filming. He said, "Really, we were drawn to Dub as a character, and how fascinating he was."

There's an easy, folksy authenticity to Lawrence, and even the story of how he met Christopherson has an all-American feel. The filmmaker was in a softball league with Lawrence's son: The grandfather was babysitting on the bleachers while his boy was at bat, and the pair ended up chatting. Christopherson said, "He knew that I was a documentary film professor and approached me after the game and said, 'Hey, I've got this interesting story, and I want you to teach me how to edit.'" They went to Lawrence's airplane hangar, where he was supposed to be building his own light aircraft. Instead, he had turned it into his own forensic lab, a five-year project collecting and dissecting every second of that terrible day. Even after the state had turned its back on the case, and redacted vital evidence, Lawrence kept investigating: No surprise, since he'd been the supervisor for a crime lab that worked with 16 municipalities. "It was like a crime scene analyst picking apart his own son-in-law's death," said Christopherson. He was already working with Barber on another project, and when they started talking about Lawrence, it was clear that this was a story that needed to be told.

Initially, it felt like a gift-wrapped documentary. Lawrence had already done a vast amount of research and collected every possible piece of information – at great personal emotional, time, and money investment. Barber said, "Dub's passionate about analyzing a situation, he's very meticulous, he spends every free moment, he stays up all night. He just really becomes obsessed with uncovering every stone that he can." Barber's theory was that approaching the death of his son-in-law as a crime scene served as a coping mechanism for Lawrence, the same way that a documentarian uses the camera to filter their own experiences. "It makes sense that, with a traumatic experience like that, maybe immersing himself in the work would act as a self-protection device."

For Lawrence, what's most disturbing is how quickly the legal infrastructure colludes to quash any hint of a formal investigation. He said, "It's pretty common in these cases of police-involved shootings where the D.A. makes an arbitrary decision." For Lawrence, that's a betrayal of the Constitution he and his officers pledged to serve. He said, "If a county attorney can be the judge and the jury and pass sentence and decide that the execution was justified, without presenting the evidence, or even collecting it, then it's not even close to the definition of due process."

Can American policing ever return to Lawrence's metaphorically idyllic Mayberry? Lawrence thinks so, but like the investigator he is, argues it will take a logical, factual, nonpolarizing discussion to get there. He said, "This country does not need to do some of the things we're doing that degrade humanity, that destroy human life unnecessarily, that violate the very principles that made us a great country that we have the potential of being."