Three women under siege in feminist western The Keeping Room 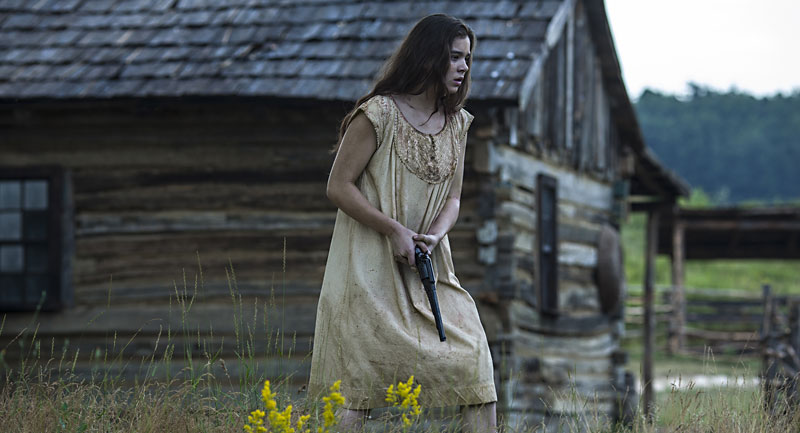 Hailee Steinfeld in The Keeping Room

Mention the cinema of the Civil War, and the first image is of the aristocratic, unreconstructed Southern ego of Gone With the Wind. That was the furthest thing from the mind of Julia Hart when she wrote The Keeping Room, which she called "a more progressive version of the story told from the perspective of women. ... This isn't Scarlett O'Hara on her plantation in her fancy clothes."

The bleak drama does echo one sequence from the 1939 epic: when the lady of Tara shoots a thieving Yankee soldier in the face. Yet the residents of this unnamed Southern farm in 1865 know nothing of the comforts of the landed elites. Two sisters, Augusta (Brit Marling) and Louise (Hailee Steinfeld) and their slave Mad (Muna Otaru) are the sole remaining residents of this dirt-scratching land. The men have gone to war, and they are left to contend with rags, starvation, and the violent appearance of two Union soldiers (Sam Worthington and Kyle Soller).

The story has its roots in real history. Hart and her husband, producer Jordan Horowitz, were on an East Coast road trip heading south and ended up at a friend's pre-Civil War working farm in Georgia. She said, "They had some moonshine and we drank it, and our friend told us about the story that came with the house." The legend goes that there were a couple of Union soldiers buried on the property, and this left Hart speculating on how they died, and who laid their bodies in the ground. She said, "I came home from the trip and I couldn't get the image out of my head of these three women. Why would they need to murder and bury these two men?"

The film opens with General Sherman's infamous quote that "war is cruelty." In The Keeping Room, Hart makes conflict just another torment in an already brutal life. However, she soon found that there are very few firsthand accounts of the experience of the working poor in the South during the Civil War, "which I think says a lot about how we preserve history and whose perspectives are recorded." So she sought what she called "more of an allegorical feel," but was careful to not let the characters become overwritten oracles of contemporary political wisdoms. She said, "I roll my eyes when I see that, and that's why I wanted to write a new version of that story."

In fact, the women on the farm know almost nothing of the Civil War itself. Hart said, "These people are alone, not in any community, and the war suddenly explodes upon them." Instead, she concentrated on what it takes from them – the certainties of life, the men that ran the farm, basic provisions – and how they contend with their absence. Most especially, the relationship between Augusta and Mad, as the social construct and implicit power structure of owner and slave become increasingly irrelevant. She said, "What would happen if all the walls around them had fallen down? As the society around them degrades, could these women who might like each other, might love each other, come together?"

The Sherman quote was Hart's key to comprehending the cruelty of the Union troops. She said, "Was he just saying things like that just to get his soldiers to do what he needed them to do, or did he really believe it? We came to the conclusion that it really didn't matter." They are an undoubted menace to the women, but Hart portrays them as the product of the war, not its progenitors. She said, "My intention was that they're absolutely suffering from PTSD, they've lost their way, and they've been turned into animals. They've lost their humanity."