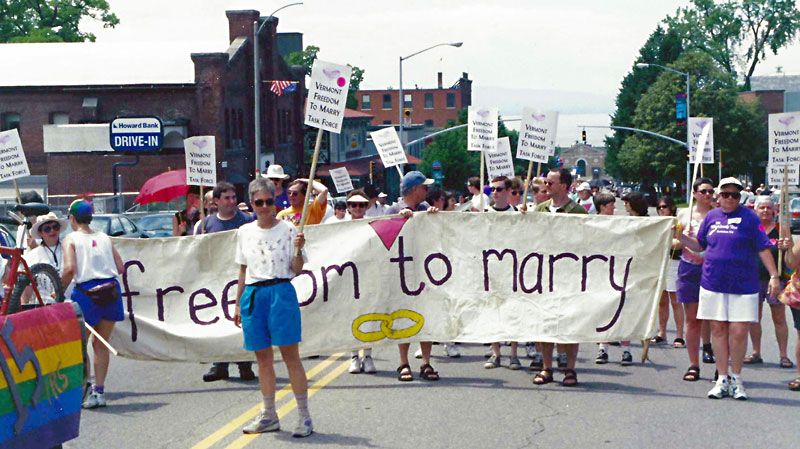 Paving the Way With The State of Marriage

After the U.S. Supreme Court ushered in marriage equality this summer, igniting widespread celebration among LGBT couples across the country, it may be easy to get swept up in the victory without stopping to think, "How did we get here?"

Well, we're in luck. New documentary The State of Marriage reminds us the long, arduous journey to equality was paved with numerous setbacks, political casualties, and emotional lows. But at the same time, it gracefully recalls how the fight was won by brazen, intelligent, and passionate activists and LGBT allies, tireless in their dedication in the face of callous opposition.

Filmmaker Jeff Kaufman profiles the unstoppable legal trio that laid integral groundwork for national marriage equality. Lawyers Beth Robinson and Susan Murray partnered up with Mary Bonauto – the lead attorney in the SCOTUS Obergefell v. Hodges case – to secure the freedom to marry in the state of Vermont (civil unions in 2000; marriage equality in 2009). Learning from the mistakes of past attempts (i.e., Hawaii's 1991 case), the team crafted a two-decade-long strategic campaign to engage the public, courting citizens door-to-door and even showing up at some unexpected venues, including the county fair. And instead of leaving marriage equality to the will of the courts, the legal pioneers were steadfast in their determination to codify equality through the Legislature – the first state in the nation to do so without a court order. The documentary also weaves the touching and intimate stories of gay and lesbian couples who served as plaintiffs in the Vermont case and highlights courageous politicians – including Republicans – that faced backlash at the ballot box after they stood up for equal rights, without regret.

As a former daily news radio reporter, Kaufman witnessed the highs and lows of Vermont's struggle for marriage equality firsthand and hoped to one day document the story and pay tribute to those who made it a reality. "My inspiration was the remarkable [mostly] women who were at the center of the movement in Vermont and how they had few resources – just humanity and vision – but were really able to change not just the country but the world. It was a tremendous thing to see," Kaufman tells the Chronicle. "Some part of the battle has reached a conclusion," he says of the SCOTUS ruling, announced just a week after the film first debuted. "But I think what Mary, Beth, and Susan showed us is that the system can work, and getting the public involved can make a difference." It seems there is no better time for the reminder.