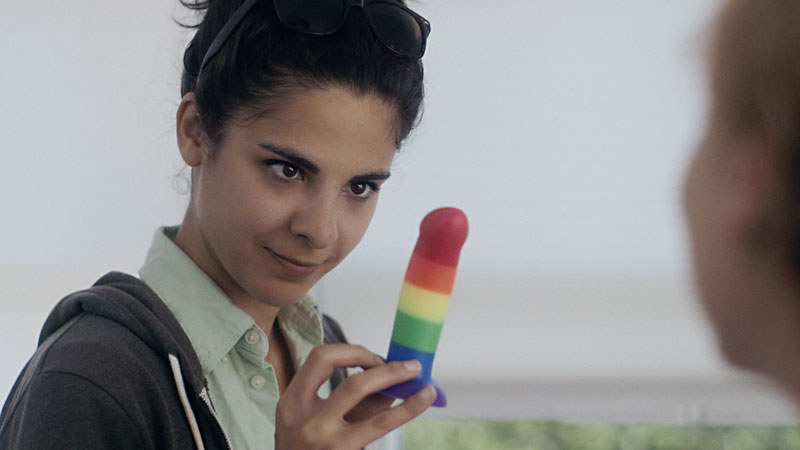 No Rom-Com Gloss in That's Not Us

Love is a many-splendored thing. Love lifts us up where we belong. All you need is love. Relationships, on the other hand, are a bit more complex than a song lyric. At least, that's the idea behind Will Sullivan's semi-improvised romantic dramedy, That's Not Us.

The film follows three couples as they head to the beach for one last summer weekend. But what's supposed to be a fun getaway gets weighed down by real-life struggles. While the twosomes sound like the start of an offensive joke – a lesbian couple, a gay couple, and a straight couple walk into a bar – writers Sullivan and Derek Dodge instead show that, at the beach's end, all relationships share threads of commonality.

With only seven cast members (and a dog), That's Not Us dives into the complexities and nuances of relationships, both sexual and nonsexual, without ever feeling quite as trite as mainstream "gay" movies. "We shot the film last September," says Mark Berger, one of the film's producers and stars (he plays James). "The summer leading up to filming, we all rehearsed in our couples with Will. But we'd work around the scene – never quite tapping the actual bull's-eye."

The three months of intense, improvisational rehearsing clearly paid off, because, while watching this movie, the viewer can't help but believe it's actually six best friends onscreen. "There was this desire to really get to the truth of these couples," elaborates Sarah Wharton, another of the film's producers and stars (she plays Alex). "Will and Derek outlined around their personal experiences, but wanted the actors to really give the characters more depth."

The believability might also have something to do with the fact that Wharton, Berger, and Sullivan are all graduates from the Tisch School of the Arts at New York University, so some connections had already been forged. However, while both Wharton and Berger play queer characters (and best friends) in That's Not Us, neither actor identifies as LGBTQ. "The idea behind the three couples in a film was us wanting to be representative of our community. More and more it's not separate, it's not like 'I'm hanging out with my lesbian friends,' it's 'I'm hanging out with my friends,'" explains Wharton.

What makes this movie utterly charming is its ability to re-create honest and relatable relationship struggles onscreen. Unlike most rom-coms, the relationships in this film are not overdramatized. That's Not Us touches on everything from the sexual dry spell to long-distance relationships to learning how to accept help. Maybe love won't tear us apart after all.