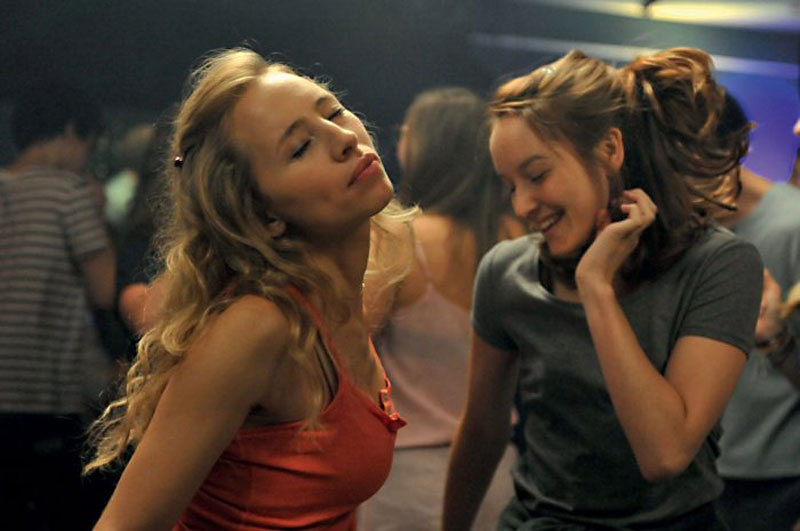 Saturday, Sept. 12, 7:20pm
It's hard to know what aGLIFF audiences will make of The New Girlfriend, the new film from prolific French filmmaker François Ozon, and the fest's Centerpiece film. As it begins, Claire is mourning the death of her extremely beloved best friend, Laura, whose ghost is as much of a presence in this film as the first Mrs. de Winter's was at Manderley. She discovers a secret: Laura's grieving husband David likes to dress as a woman, whom Claire christens Virginia. Although Claire acts disgusted, she's attracted to Virginia. Ozon treats his characters with great sympathy, but viewers may be less than thrilled that the story focuses on Claire's sexual awakening, rather than Virginia's discovery that she is, in fact, a woman. At the same time, the film and its actors have a lot of charm. Ozon can't resist giving the story a touch of Vertigo as Virginia takes the place of Laura, Claire's first great love, and it's fun to watch Virginia seduce Claire because of, and not despite, her femininity. – Amy Kamp Friday, Sept. 11, 6:50pm
Top-level athletic success requires a winning combination of physical strength and psychological prowess. This doc follows two athletes – Fallon Fox, MMA's transgender pro fighter, and Terrence Clemens, a gay college basketball player – as they fight for acceptance in their sports, and in their lives, while navigating added obstacles of stereotypes related to sexuality, gender roles, criminal history, race, and even the scientific mechanisms that made their fiercely competitive bodies tick. Balancing heart-wrenching hard reality with the glory of wins, the pain of losses, and everything in between, these stories of queer athletes are just as riveting as a championship game. – Jessi Cape

Thursday, Sept. 10, 7 & 7:30pm
This year's Opening Night film is a surprisingly endearing look at what it means to exit the closet into a room full of straight, bromantic best friends. Adam, a car mechanic, frequently works out, plays poker, and hits the bar in search of love (or whatever) with his tight-knit crew of childhood buddies. For his 24th birthday, Adam decides to give himself the gift of living true. Small-town talk is inevitable, but he's unsure of how his dude posse will react. Testosterone-laced humor ("I just knew I felt different – I didn't know why boobs were so cool.") works to pepper the story with laughs, but it's the unexpected, heartfelt insight into the domino effect of Adam's revelation that makes this film so charming. – J.C. Sunday, Sept. 13, 3pm
This heartfelt, matter-of-fact documentary follows a few months in the lives of three Austin trans men as they navigate the challenges that go along with transitioning from female to male. With intimacy and respect, the film provides a look at common obstacles like family acceptance, body dysmorphia, relationship issues, and self-confidence, and also reveals a glimpse of Austin's supportive queer community. Director Janet Jensen, a University of Texas graduate, has previously been a part of the film crew for various locally shot projects including The Tree of Life, Boyhood, and Friday Night Lights. Making its world premiere at the fest this year, Formerly Known As marks her third feature. – Caitlin Moore

Sunday, Sept. 13, 12:35pm
Poor David Gold. Once a child star on a popular kids' show, he's just been fired from a gig recording daily affirmations, and is now a washed-up alcoholic who is mere days away from getting evicted. When he successfully hatches a scheme to become a high school guidance counselor, you think you're in for another corrupt-the-youth dark comedy. That may be the tagline, but writer/director/star Pat Mills (himself a former star of You Can't Do That on Television) infuses Guidance with a heartfelt honesty that shines through the (often hilarious) boozy shenanigans. And kudos to Mills for making a film where the coming out of the main character isn't the defining force of the narrative, merely a natural extension of the character's growth. – Josh Kupecki