Filmmaker Bob Byington's new feature 7 Chinese Brothers is a timeless tale of a man-child and his faithful canine companion, except, you know, with too much alcohol and more than the prescribed amount of pills attached. Newcomers to the Austin auteur's sublimely comic tone may be perplexed by the movie's seeming appearance of not all that much going on, but that's the wrong way to parse Byington's approach. As in his previous films Harmony and Me and Somebody up There Likes Me, it's not where his stories end up, it's the altogether unique way they get there that counts in the long run. Byington's sneaky that way.

7 Chinese Brothers features a remarkably subtle (yet frequently all over the place, in a good way) piece of genius acting from indie wunderkind Jason Schwartzman as Larry, a lonely, aimless slacker who, at 35, slowly comes to terms with the dawning realization that he's letting his life slip by without a whole lot of active input into it. Sound familiar? In Byington's hands, it's not, and Schwarztman gives one of the most human performances of his career alongside other perfectly cast actors Olympia Dukakis, TV on the Radio's Tunde Adebimpe, and Stephen Root.

The Austin Chronicle caught up with Byington over the phone while he was up in New York and discussed his new movie, why Austin never entirely feels like Austin in his films, and how having to sit through someone else's bad movie inspired him to write 7 Chinese Brothers. 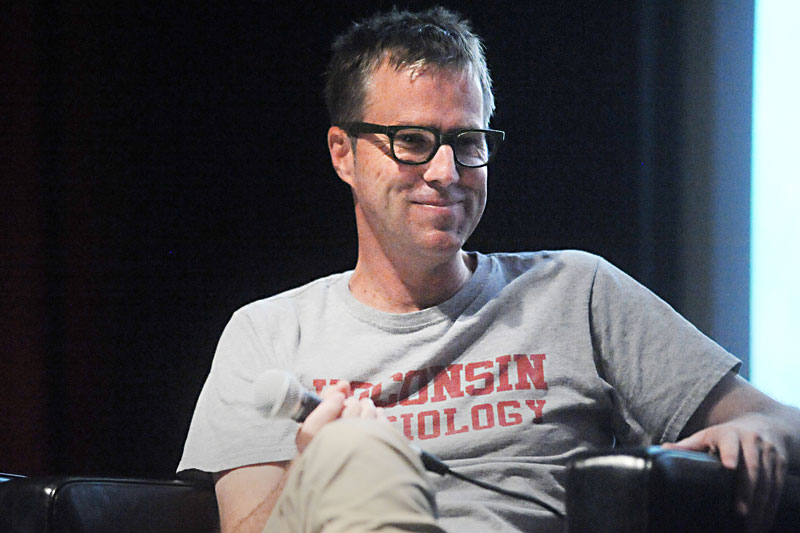 Austin Chronicle: How much latitude for improvisation did you allow Jason and the other cast members?

Bob Byington: There's always a blurring that goes on for me. Jason came to town a few weeks before we started shooting and we began talking about the character and about comedy we liked. I feel like we built the character [of Larry] together. The character is really a compendium of scripted bits, improvised bits, and then I think bits that, taken fully, are kind of half of each.

Here's an example: We shot the scene where Jason keys the car on the third day, and I was very uncomfortable watching Jason do that. So I went home and I wrote a scene of Larry telling his dog that he keyed the car. And I did that because it was a sort of therapy, for me, just writing it down. That scene is an example of how [Jason and I] would work. Just weird things like that would happen. We were driving to the set one day and he was doing a bit with made-up French words. He doesn't speak French, at all, but he just started doing that and I thought it was really funny so we just began shooting that. That's not a very good answer, but it's such a big mess of material.

AC: This is by far one of Jason Schwartzman's most uninhibited and nuanced performances. Did you have him specifically in mind for the part when you were working on the initial script?

BB: No, not really. I wrote the script in 2001 and Jason was a much younger man then. Larry was always going to be around the age of 33 or 35. So we discussed that part with a couple of actors over the years. Then I met Jason a couple years ago, he read the script, and it just worked for him to do it.

AC: You cast Schwartzman's own dog, Arrow, as Larry's dog, also named Arrow, which works great but also has this quirky meta thing going on as well.

BB: Yeah, that was another thing that was part of the improvised-scripted movie. We had been looking at some dogs and Jason, who did not suggest actors for parts even though he has access to tons of actors, said, "You might want to meet my dog Arrow, he's kind of interesting." So I met [the dog] and right away wanted to work with Arrow. He was every bit as charismatic and interesting when I first met him as he is in the movie.

AC: Arrow's a perfectly expressive yet low-energy complement to the character of Larry, who is himself a pretty low-key kind of guy.

BB: Arrow as scripted was supposed to be kind of mean and tough. So that changed because there was no way we were going to make that dog look mean and tough. Rather than having Arrow protect Larry's house during the break-in scene we decided he wouldn't do anything. But yeah, Arrow ended up sort of stealing the movie in a weird way and we certainly couldn't have anticipated that.

AC: TV on the Radio's Tunde Adebimpe has a very sly, very funny role in 7 Chinese Brothers. Had you known him previously?

BB: I met him in 2009. I had seen him in [Jonathan Demme's] Rachel Getting Married. We were premiering Harmony and Me in New York at MOMA's New Directors/New Films series, which gave us a little momentum to, you know, reach out to somebody like Tunde for a project, and we just kept in touch over the years.

AC: There's an interview with you on YouTube in which you say that 7 Chinese Brothers was a response to director Scott Hicks' Stephen King adaptation Hearts in Atlantis, a movie you apparently didn't like so much. Do you want to expand on that a little? Because that's the first time I've ever heard of a filmmaker having a negative response to someone else's movie and then being spurred into action on their own film.

BB: Well ... I'm not super comfortable attacking him, but at the time I did see his movie and I didn't like it. I had seen [Hicks' 1996 Academy Award-winning movie] Shine and liked it a lot. So I think I was excited to see Hearts in Atlantis and was very, very disappointed. For some reason, I was with a friend and I said, "I can write a movie that's better than that movie," and then over the course of the next week I just wrote [7 Chinese Brothers] out as kind of a response. I'd never really tried something like that. It was kind of a weird thing to do.

AC: That's interesting because, in my experience, when you see a movie that you have high hopes for that doesn't necessarily live up to your expectations, it's kind of a bummer all around. It doesn't usually engender a – in this case – positive creative response.

BB: I agree. Usually I just turn off a movie when I don't like it after 15 minutes. In this case, I was at a screening for Hearts in Atlantis and I was with somebody, so I couldn't really get up and leave. For some reason, if I'm watching a bad movie and I have to watch it, for whatever reason, it weirdly ends up being constructive even though it can be very uncomfortable.

AC: Your films are all set or shot in Austin, although often unrecognizably so. You don't focus on the skyline or have extraneous location-specific locations. And 7 Chinese Brothers continues that aesthetic. I'm curious if the dramatic way in which Austin has changed over the course of your career has impacted your filmmaking and storytelling process.

BB: I think it has. Richard Linklater's establishment of film culture in the early Nineties is still a type of specter, I think. It's funny, because Doug Benson said that 7 Chinese Brothers is like Slacker but it's just one character careening around instead of all the characters in Slacker. I don't love comparisons to Slacker only because I think an audience wants to see a slightly more active narrative at this point, you know, in 2015? Slacker is 25 years old, and I think it holds up, but I know the last few movies I've made, I've been concerned about the audience's attention. A lot of viewers mistake Larry's laziness for the movie itself being lazy. The people who don't like [7 Chinese Brothers] think that nothing happens and Larry just lays around and the movie just lays around. Which, you know, people who don't like Slacker say the same thing and it's just not true.

AC: In an ideal Austin, every new arrival would be required to watch Slacker, Nancy Higgins' Viva Les Amis, Robert Rodriguez's El Mariachi, and, you know, learn what Austin was like back in the day and therefore where it's going and what it's becoming in the here and now.

BB: I remember when we premiered Harmony and Me, like I said, in New York and it was very much perceived as an Austin movie. That caught me off guard in a way that I think I ought to get comfortable with.

AC: And yet that film wasn't particularly focused on anything specific to Austin, really.

BB: Yeah, well both that and 7 Chinese Brothers were meant to be set in a kind of Anywheresville, an anonymous cityscape.

AC: Did you always plan on keeping your career in Austin, as opposed to heading out to Los Angeles or Brooklyn or wherever?

BB: [Laughing] No. But it's funny because I shot something yesterday with Alex Karpovsky here in New York and there's, like, seven things that are a pain in the ass to do in New York that would just be really simple in Austin. I was yearning to be in Austin and to have all this stuff that's annoying up here be really easy.

AC: Give me an example of those seven annoying New York filmmaking hassles.

BB: Camera stuff, getting your rig set up, just this stuff that I take for granted in Austin because it's really easy to set it up and have it stay set up. The rules are definitely different in New York and you get these expenses that you wouldn't necessarily get in Austin. I'm going to shoot my next movie in Austin. It's just so much easier to do. Books on Film
Austin filmmakers and the books they love