Companion doc to The Act of Killing, The Look of Silence revisits Indonesian atrocities Imagine two old men. The first is asleep in bed, plagued by nightmares. The other is naked, terrified, crawling through his home in senile confusion.

They are reflections of each other. The dreaming man is from Joshua Oppenheimer's revolutionary 2013 documentary The Act of Killing. He is Anwar Congo, a former member of Indonesia's death squads responsible for millions of murders in the Sixties under the blood-soaked regime of General Suharto. The naked man is featured in Oppenheimer's follow-up, The Look of Silence. He is Rukun, the father of Ramli, one of that endless mass butchered by men like Congo. Five decades later, Rukun dwells helpless in the shadow of this unfathomable and unpunished crime. Oppenheimer explained, "The perpetrators are still in power, and people's lives are still being destroyed by unresolved fear."

Oppenheimer gives a simple context: Imagine if the Nazis had won World War II. That's the plot of speculative literature like Philip K. Dick's The Man in the High Castle, "but it's not some surreal science-fiction scenario," said Oppenheimer. That's what effectively happened in Indonesia under the Suharto regime. Moreover, because the victims were smeared as Communists, and this was the height of the Cold War, many Western nations applauded the genocide. The story of the atrocities has gone untold and unprosecuted, and the perpetrators are now key actors in an administration and a culture built on the bones of their victims. Oppenheimer said, "Neither film is about 1965. Both are about impunity today."

The Act of Killing allowed figures like Congo to implicate themselves in their own crimes. The Look of Silence serves as its companion piece – most especially, to the longer international cut. In that version, Oppenheimer said, "Every sequence culminates in these abrupt cuts to silence. These are the sudden shifts in the perspective of the film from the perpetrators to the absent dead, who I hope haunt every frame of the film." In The Look of Silence, that space is filled by Adi Rukun, Ramli's brother. An optometrist by trade, under the guise of visiting the homes of these aging killers to test their eyes, he instead bears witness to their terrible confessions.

In Oppenheimer's world, collaboration is everything. He refuses to even take full credit for The Globalization Tapes, his 2003 documentary on exploitation in Indonesia's palm oil industry: Instead, he describes himself as "a teacher and facilitator for the plantation workers to make their own film." His relationship with Adi, his father, his family, and the murder of Ramli, actually predates The Act of Killing. At that point, he thought his documentary would concentrate on the victims of the 1965 massacres, but too many families were scared to talk to him on camera. However, it was people like Adi who convinced him to change tack. "They called me to this midnight meeting in Adi's parent's house, and told me, 'Please don't give up. Try to film the perpetrators.'"

Over the years of filming The Act of Killing, Oppenheimer regularly sent Adi the footage he was capturing. One tape was particularly sickening, because the two recorded weren't just any unindicted criminals. They were part of the state-sanctioned death squad that killed Ramli, ghoulishly recounting the horrible mutilation they had inflicted on him with no more passion than if they were recalling a fishing expedition. Adi saw them confess to his brother's murder, and knew there was no way they would ever face justice. After seven years of watching such footage, he felt he must face these killers, but Oppenheimer's response was immediate and reflexive. "No. Absolutely not. There has never been a nonfiction film made where survivors confront perpetrators while the perpetrators hold a monopoly on power, because it's too dangerous." 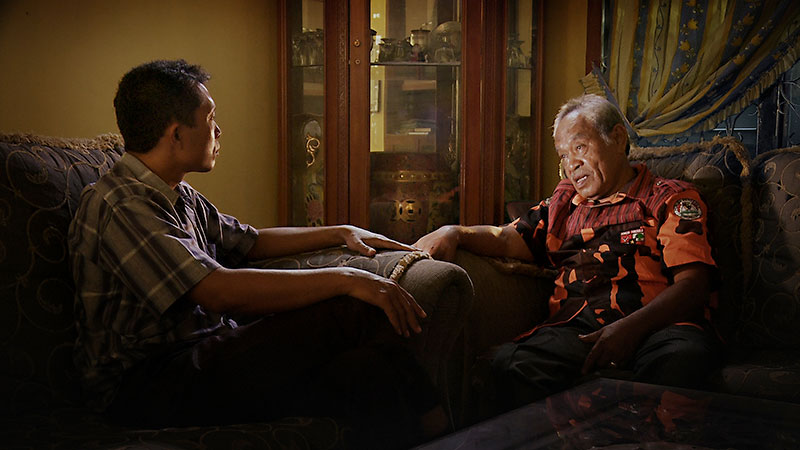 It took one specific video to change Oppenheimer's mind. Before he left Indonesia to edit The Act of Killing, he had given Adi a video camera to use as a kind of notepad. Adi had sent him his recordings, but this was one he had kept to himself, finally showing it to Oppenheimer on his return to Indonesia in 2012. This was that footage of his father, naked, terrified, succumbing to dementia. This was the first day on which he had no clue who his family was. The more they tried to console him, the more terrified he became. Oppenheimer recalled Adi explaining why he had recorded this: because this was the moment at which it became impossible for his father to heal. He had forgotten his murdered son Ramli, but his life was still ruined by that loss. Oppenheimer said, "He's become like a man locked in a room who can't find the door, let alone the key. We watched the rest of the film play out in silence and Adi said, 'You see, I don't want my children to inherit this prison of fear.'"

The pair knew they had an extremely narrow window of opportunity, with The Act of Killing both a blessing and a curse. In seven years of filming, Oppenheimer became close with political figures across the country, including Vice President Jusuf Kalla. For the second film, Adi was talking to lower-level functionaries around his village, and those national connections came in handy. Oppenheimer said, "My crew explained they probably wouldn't dare to even detain you, never mind physically harm either one of you, because they wouldn't want to offend their superiors." However, once the first film was released, that protection would disappear. To minimize risk, Oppenheimer cut all Indonesians from the crew, and Adi traveled without any ID: While his international crew could call their embassies if arrested, the Indonesians would have no such recourse. Oppenheimer said, "We had to be prepared to quit at any point. We had to have the family at the airport, ready to evacuate in case anything went wrong."

Adi hoped the men he interviewed would show some contrition or guilt. While that is not forthcoming, Oppenheimer sees these films making a broader institutional change in Indonesia. Initially, there were fears that The Act of Killing would never be seen there, but now it has been publicly screened thousands of times, with millions of digital downloads. Oppenheimer said, "When the film was nominated for an Academy Award, the government of Indonesia issued a statement saying, 'OK, we know what happened in 1965 was a crime against humanity.'" This was the state's first-ever admission of guilt and, rather than suppressing The Look of Silence, it is in fact being distributed by two government entities, the National Human Rights Commission of Indonesia and the Jakarta Arts Council. Oppenheimer said, "That's something unimaginable with The Act of Killing." Yet, he sees the real struggle as changing the official history, as taught in schools and promulgated by Jakarta, because that will shake the nation to its core. He said, "The oligarchs, the perpetrators, their protégés, their power and wealth will be exposed for what it is, and acknowledged officially for what it is – the illegitimate spoils of plunder and atrocity."

The films have also placed a new international spotlight on the complicity of foreign governments in the genocide, with questions raised in the Japanese diet, the German parliament, and the U.S. Senate. However, Oppenheimer argues that some difficult answers on this one horror should be enough to salve their consciences. While The Look of Silence will be his final film in Indonesia, he said, "This kind of massacre and atrocity is not unique to Indonesia. In fact, it's one of the less-known massacres perpetrated under the cover of the Cold War in the name of democracy and freedom and anti-Communism." Go back to that metaphor about the Nazis winning World War II: The impunity Suharto loyalists still enjoy "is not the exception to the rule, but the rule itself across much of the world."

The Look of Silence opens Aug. 14 at the Alamo South Lamar. See Film Listings for showtimes and review. For an interview with Oppenheimer about The Act of Killing, see "Making a 'Killing,'" Aug. 9, 2013. More The Act of Killing The Look of Silence, The Act of Killing, Joshua Oppenheimer, The Globalization Tapes