Andrew Bujalski Pumps Up With Results 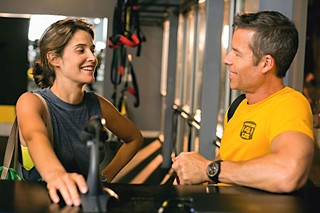 Andrew Bujalski is ready for people to stop asking him about mumblecore. The writer/director made his name in the Aughts punching above his weight with low-budget portraits of twentysomethings navigating the post-collegiate wilderness. At South by Southwest 2005, he accidentally named the subgenre that would, for the better part of a decade, define and encapsulate him and several other artists who emerged at the same time, from Joe Swanberg (Drinking Buddies) and Greta Gerwig (Frances Ha) to Mark and Jay Duplass (HBO's Togetherness). Ten years later, those mumblecore fellow-travelers have moved on to bigger budgets and audiences – and mostly shed the label. With his new film, Results, opening this Friday, May 29, Bujalski is ready to do the same.

Over breakfast at Cherrywood Coffeehouse – the same place he first dreamt up the kernel of an idea that became Results – Bujalski reflects on the "silly, dumb name" that he supplied to an interviewer a decade ago. He maintains that there was never a mumblecore "movement" with any sort of common aesthetic aims, and that the name was a private joke between him and longtime sound collaborator Eric Masunaga. "With a little more distance, I get it," Bujalski says, digging into his huevos rancheros. "It's less about identifying an aesthetic and more about identifying a moment, a set of common influences, and some common experiences of a generation." He mentions the grunge craze he encountered growing up in the early Nineties and the two biggest acts of that era, Nirvana and Pearl Jam. "As a kid, I thought, 'Well, they both wore flannel shirts, and they have something in common. But the music sounds nothing alike.' I think that's always been the way of that sort of thing."

Indeed, Bujalski has always stood out from his peers for his refusal to let storytelling conventions and on-the-nose quips supersede naturalistic character motivation and dialogue. His last film, Computer Chess, was his first step outside the box of mixed-up smart-kid character study – part nerd-out period piece about computing in the Eighties, part cult-ready, ultra-lo-fi science fiction. It left critics pleased but did little to expand his audience. Results is a departure not just in style but also in business model: a sincere attempt to court a larger market.

"For as long as I've been doing this, there's been this hovering question of if and when I was ever going to try to work with professional actors and in a more professional vein," Bujalski says. "There are two ways to approach that. One is as an artistic challenge. I like movies that are made that way, so how could I make one of those that's my own? Then there's the pragmatic necessity of it. I have two kids. I have a mortgage. It seemed like it would be a fine time to try making five figures from a movie."

He began, he says, by coming to the coffeehouse and brainstorming which actors he'd most like to work with. He immediately landed on indie stalwart Kevin Corrigan (Superbad), a friend, and Australian headliner Guy Pearce (Memento), who'd intrigued him at a recent meeting. "Immediately I was amused just trying to imagine the two of them in the same movie," Bujalski says. That gave him his setting – a gym, where a paunchy type like Corrigan might have reason to approach someone like Pearce, a real-life former bodybuilder.

Corrigan plays Danny, an accidental millionaire who walks in off the street and meets Trevor (Pearce), a would-be fitness guru. Trevor sees dollar signs, but isn't particularly good at milking them out of patsies like Danny. That task falls to Trevor's employee and friend-with-benefits, Kat (Cobie Smulders, How I Met Your Mother). Kat starts making house calls to Danny's half-empty mansion. Danny develops a crush, Trevor develops jealousy, and the three wheels of romantic comedy are set in motion.

Audiences expecting a boy-meets-girl, boy-loses-girl, boy-gets-girl paint-by-numbers will be surprised by the story's idiosyncratic rhythms and pleasant meanderings. "Somebody tweeted somewhere that Results is my weirdest movie yet," Bujalski says. "There's some gratification in that. I remember being a 6-year-old on the playground, and having somebody call me weird, and being proud of that. So I still have that impulse. But that isn't really what my intent was. I thought I was making something marketplace-friendly."

"I got as far as fun, funny, good-looking people who are famous," he adds. "After that I probably stopped worrying about the constraints of the marketplace, for better or worse."

Film buffs will likely agree that Bujalski's willingness to throw cookie-cutter marketing wisdom to the wind is for the better. Most Austinites will too, even those who have never heard of mumblecore. Results is, among other things, an honest portrait of our city in the present tense – not a backward-looking nostalgia trip, but a light-touch consideration of what we're turning into.

"Look, Slacker is, was, and forever shall be the ultimate Austin movie," Bujalski concedes. "But as everyone's all-too-aware, a lot has changed since then. There was a lot of new Austin, the Whole Foods culture of Austin, that I don't know if I'd ever seen before [on film]. Of everything I've ever done, I feel like [Results] is the most specific to a place."

Perhaps the defining image of Bujalski's "new Austin" is a running gag about the interior of Trevor's head, visualized as a big, empty exercise room with a juice bar way down on one end. (It's also his fantasy of a new space for his gym.) It's a jab at the skin-deep aspirations of a city that sometimes seems to be trading away its countercultural, outsider-art identity for one of yuppie self-improvement, but Bujalski doesn't mean it too harshly.

"The philosophies that these characters have are very rampant in the culture. I don't think there's anything essentially wrong with trying to improve yourself," he says, mentioning exercise and psychological therapy as two forms of self-improvement with undeniable upsides. "But I do think there's a human tendency to want to look upon these measures as solving all your problems. And it never works that way. No matter how much you optimize, you're still you. And sometimes we're so anxious to get away from ourselves that we think if we just optimize ourselves enough, we won't have to be ourselves anymore."

It's a delicate balance of satire and empathy for a director who can relate to the out-of-shape Danny. "The only way I was in this lifetime going to justify going to the gym would be to call it research," he admits. He also speaks of a "secret subdermal influence" of Sylvester Stallone's Rocky franchise – Rocky II in particular – that runs throughout the film, sometimes in explicit dialogue references. It's fitting for this point in Bujalski's career. He's already played the out-of-nowhere underdog, beating the odds with guerilla-style filmmaking and convincing lead performances from his post-collegiate roommates. Now he's out to prove that he can repeat his successes on a bigger scale and make good on those who invest serious money in his art.

If nothing else, he's figured out a way to stop press coverage of his future films from turning into referendums on his history with mumblecore. "My hope all along was, if I did a movie with famous people in it, people would want to talk to the famous people and not me," he jokes. With Pearce and Smulders appearing on The Today Show this week and Results opening in more than 35 markets in May and June, he may just get his wish – if not from his hometown paper.

Results opens Friday, May 29, at Violet Crown Cinema and Alamo South Lamar. Bujalski will be in attendance for Q&As on May 30, 6:45 & 10pm at the Alamo and May 31 at Violet Crown, 7pm. See Film Listings for showtimes and review. 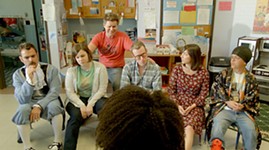