Mobile Games to Keep You Cool

When the heat is on, cool off with local apps

It's during this temperate season in Austin when we try to forget that insufferably blistering temperatures are imminent and will continue for four months (at least). Soon, full-grown adults will be dressing like toddlers and praying that the air-conditioner gods don't abandon them. Simply walking around town, a need for respite from the UV bombardment often arises to keep your personal sweat index from rising past "sexy sheen" and going into "damp mop" territory. In those instances you find the nearest venue with AC – be it a bakery, library, restaurant, bar, or, heaven forbid, Starbucks – you sit down to nurse a beverage and try to keep your thighs from sticking to your chair. But now what? Your brain is too fried to compose a pithy tweet about your predicament, and establishments tend to frown upon napping.

What you need is a mobile distraction that doesn't require too much brain power, some mindless fun. Here are a few local options that are simple, quick-play, and just addictive enough to help while away the hours spent recapturing your cool. 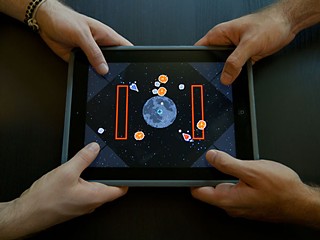 by Rusty Moyher; App Store; Free
Like arcade classic Asteroids, except the unsuspecting floating rocks have been replaced with other players out to destroy you. Jockey for position, avoid obstacles, and shoot your opponents, or get "asploded" into the void of space. It's a simple idea bolstered by ingenious levels, inspired touches, and nuanced design details that make it a must-play if you have an Apple device and friends. You'll master the controls in seconds, but if your opponents aren't up to snuff, Astro Party has enough emergent surprises to make things fun for even the most consistent loser.


Angry Henry and the Escape From the Helicopter Lords Part 17: The Re-Reckoning

by Deep Plaid Games; App Store; Free
The name pretty much tells you everything and nothing at the same time. Take the reins of the titular Henry and run, jump, and, most importantly, shoot in an attempt to take down the devious helicopter creations standing between you and ... well, more anger. It's not perfect, but the combination of staggering difficulty and regular laughs was enough to get the attention of YouTube sensation PewDiePie, who gave the game an even bigger cult following. We are unashamed to say we belong to this cult. 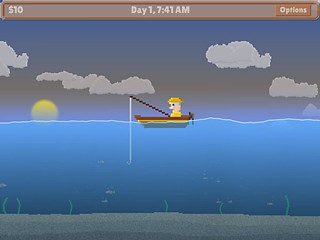 by SuperMoof LLC; App Store, Google Play; $1.99
You know what they say about fishing, that it's just a good boat ride spoiled. In the case of Man Eats Fish, it might just be the Zen experience you're looking for. Go out on your dinghy, catch some fish, sell them at your fish and chip shop, and hope you have enough money to buy gas and do it all over the next day. Upgrade your ship, catch better fish, get better customer reviews, and, if things go according to plan, rule the culinary world. Slow and steady wins the race.

by Justin Leingang; App Store, Google Play, Amazon Apps; Free
If something in the vein of Flappy Bird is the only cure for your heat-addled mind, then grab your umbrella and take to the skies. It's a game of timing, as you either ride the winds upward toward the clouds or float to the ocean below. Don't go too far in either direction and avoid flying dogs (naturally) to acquire items that will help you on your quest. It's a struggle as old as time: keeping cats out of the water.

App Store, Google Play, $2.99
The original mobile endless runner game. It's been updated with new challenges and functionality, so there's no better time to revisit this one-touch arcade-style classic.

App Store, Google Play, $2.99
Part rhythm game and part sword-wielding psychedelic fantasy. You even unlock special levels if you're in a library.