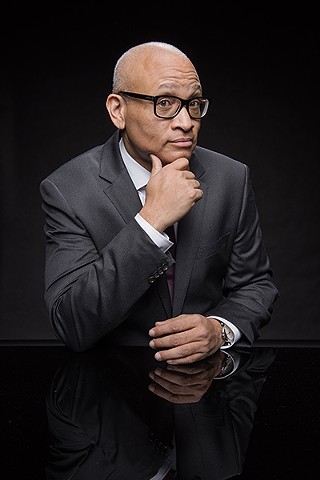 There's nothing particularly innovative about the format of The Nightly Show With Larry Wilmore. Created by Daily Show maestro Jon Stewart, the Comedy Central program debuted in January, sliding into the void left by The Colbert Report when its host decamped for The Late Show (CBS) in one of the personnel shuffles that's become part of the comedy news-talk-show cycle of life.

Wilmore previously served as "Senior Black Correspondent" on The Daily Show, and The Nightly Show usually starts with him running down some of the day's notable events in familiar fashion. From there, it follows a loose format that its runners are still tinkering with, but that generally includes a topical comedy bit, and a panel discussion among guests from the political and entertainment realms – much like HBO's Real Time With Bill Maher, though without Maher's bullheaded blustering and self-seriousness.

Wilmore, in other words, operates well within the conventions of his genre. And yet, along with a few breakout network dramas, The Nightly Show has already – surprisingly, startlingly – occasioned a shift in the nature of the televised political/cultural conversation. If anything, the show's slow roll is essential to its power – it's precisely because it isn't overtly special or flamboyantly great that it's able to foreground just how transformational the simple act of inclusion can be.

Because Wilmore can be such a subtle, goofy, and gracious wit, it's easy to forget that Stewart had a political vision for the show from the start. He wanted to call it The Minority Report (something Fox's plans for a series by that name put a stop to), and he wanted it to be a place where the underrepresented could represent.

Stewart might have known what that would look like, but for most of us, the show is a revelation, illuminating just how slim a view of the world's affairs we usually get, from "real" and "fake" news shows alike. The Nightly Show's panels are diverse beyond all precedent and concern themselves with issues of the day that are often quite different – or at least presented much differently – from those that occupy the minds of your average politician, hedge fund manager, or network news anchor. Where Stewart and Colbert's personas are shouters, building jokes to a crescendo of hilarity with a rapid series of pummeling jabs (an approach that John Oliver adopts in a more hectoring manner on HBO's Last Week Tonight With John Oliver), Wilmore draws us in more slowly, though no less comically. He's also more interested in hearing what guests have to say than in bludgeoning them, and viewers, with his take (like Maher) or steering them in the direction of his punch lines (see: Stewart, Colbert). And while his "Keep It 100" segment, in which he presents his guests with uncomfortable or ridiculous hypotheticals often based in identity politics, could use some tweaking, it gives viewers a glimpse of what these conversations can be like when it's not just a bunch of white dudes sitting around talking.

That freshness, of course, might not be enough to hold the attention of viewers accustomed to the pace and aggression of its predecessors, and Wilmore has acknowledged that various aspects of the show need work; how it will relate with historic twin The Daily Show when Trevor Noah takes that over is another unknown. Most important is the question of what Noah, a South African of biracial heritage, will (or won't) bring to the very specific situation of being the second of two black hosts who have variously broken television ground slowly, as the saying goes, and then all at once.