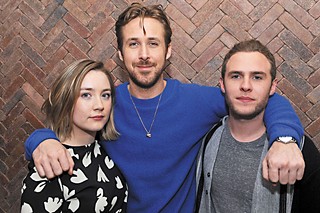 Saoirse Ronan (l), Ryan Gosling, and Iain De Caestecker in Austin for the premiere of Lost River at SXSW 2015 (Photo by John Anderson)

No nation on Earth self-mythologizes like the United States. Growing up in Montreal, the young Ryan Gosling fell under its spell. "Like any Canadian kid, you look to America and you have a romanticized idea of it," he said while at SXSW last month promoting his new film.

In Lost River, Gosling builds a new mythology, rewriting modern America as a post-industrial fantasy land. For his debut feature as writer and director, the star of Drive, Lars and the Real Girl, and Terrence Malick's upcoming, Austin-shot Weightless was drawn just across the border from his home country to Detroit, Mich. Gosling said, "It's the birthplace of the idea of the American Dream, at least as I knew it, with Motown and the Model T and the middle class. When I got there, it was very different from how I imagined it." He spent a year traveling around the city with a Red camera, and fell in love with its decay, and the strength of those living among the rubble. Their stories became the stream that led to Lost River, and Gosling was swept away when he found himself in the historic and decaying Michigan Palace Theater: "I shot this pan down from the ceiling, and there's this hole in the stage. I thought, one day, when I'm making the film, my lead character will come out of that hole. He will be born onto this stage."

A year later he returned, re-creating that very shot with a full crew. But it still took one last moment of inspiration for the actor to dare make the jump behind the camera. That came from Guillermo del Toro, whom Gosling called "the wizard who gave me my sword and my shield and sent me on my quest. He was the first person I told about this idea, that I had all these photographs of what I wanted to do. I showed them to him and he said if you don't direct it, I will. I don't know if he meant it, but I thought it was the coolest thing you could say."

Much like the swamp gothic of 2012's Beasts of the Southern Wild, Lost River refracts the classic story of American decay through Brothers Grimm folklore, making the city both immediately identifiable as Detroit, and also a substitute for Anytown, USA. Gosling said, "I didn't want to get bogged down in the political minutiae. I felt what was happening was universal somehow, and I felt a fairy tale's format was the best way to communicate that." Detroit was his magic kingdom: Like the thorn bushes that engulfed Sleeping Beauty's castle, its evocatively named dog-strangling vine has reclaimed shuttered factories and pulled apart abandoned houses. "There are miles and miles of abandoned neighborhoods," Gosling said. "Within those neighborhoods there are pockets where there are families, and they will be the only family for blocks and blocks. The houses next to them are burnt down or being torn down, and yet they stay. It's moving. It's scary, and it feels for them that the dream has turned into a nightmare."

Gosling on the set of Lost River

This is the second film this year set against Detroit's tragic urban blight. However, in breakout horror film It Follows, the teen protagonists are from the nice side of the Eight Mile divide, and view a trip to the rough parts of town as a daring adventure. The community of Lost River is that rough part of town, and its residents are bound to it by loyalty, yet desperate to escape. Fusing classic teen drama and immortal fairy tale, Bones (Iain De Caestecker) plays a version of the Springsteen hero as valiant knave, scavenging for treasure to fix his steed – a broken-down old car to get him across the city limits. Rat (Saoirse Ronan) is both the girl in the window next door and the princess whose beauty charms the animals. Gosling said, "The kids romanticize what is happening to them, because the reality is so much worse. If they can say that the world is this way because a spell has been cast on them, then at least it gives them a romantic filter to see their lives through."

Just as the city had informed Gosling's script, its haunted streets and discarded homes helped the cast discover who these characters really are. De Caestecker said, "When you go into these places, there's a tangible history, an energy you can feel in these houses that people have just left. I remember we went into one house, and there were just albums of old photos and baseball cards on the wall. You can't manufacture that. There's a ghostly presence you can feed off." He found the overgrown spaces and decaying structures pivotal for Bones as a questing loner. "I was a stranger in this city, so I would walk about and be like, what's going to jump out at me, what's going to inspire me? You have a similar thing with the character, where he's just walking about, trying to find some money to support his family for the next day."

For Ronan, the people of Motor City, and Gosling's willingness to weave them into the scenes, gave their scenes life. She said, "There were a lot of characters that we literally bumped into during a scene, and they were from Detroit, born and raised, and they'd share their stories with us."

Those moments provide context for Bones and Rat as dreaming children on the cusp of maturity. Yet for adults like Bones' mother (Christina Hendricks), fairy tale becomes fin de siècle horror. Gosling makes deliberate nods to the nihilistic creativity of Paris' infamous Théâtre du Grand-Guignol, whose graphic stage plays were the birth pangs of modern gory horror, and the legendary and lost Café de L'Enfer, Paris' morbid eatery in which diners consumed amid reliefs of diabolical tortures. He said, "There was a scene in early 20th century Paris that was very macabre, with these murder shows that were wildly realistic, and gave birth to horror cinema." He saw those same creative impulses and murky undercurrents in post-Katrina New Orleans. "These kinds of environments attract people with very dark intentions. These are places where nobody's watching, and you can get away with anything, if you have a dark instinct that you want to act out."

And then there's the evil beast Bully (Matt Smith), the raving brute torn straight from Walt Disney's worst fever dreams, a babbling monster running riot through the crumbling city. Gosling explained, "If society was functioning, he was probably a prescription away from being manageable." Instead, Bully is the "king of a place where there are no subjects, putting a La-Z-Boy in the back seat of a car and getting his friend to drive him around like it's his own version of the Popemobile." The casting of tall, skinny, pallid, and quintessentially British Smith, most famous as Doctor Who, as a Detroit tough man may seem unlikely. Yet it was Smith's performance as the mercurial and enigmatic Time Lord that gave Gosling the Frollo to Detroit's Notre Dame, the Jafar to Bones' Aladdin. He said, "I saw [Smith] screaming into a microphone, reading the riot act to these aliens in their spaceship. It was so commanding and compelling, and there's so much conviction in it, I just thought, first of all, what a hell of an actor, but then, what would it be like to shoot that? I know, as an actor, that there would be nothing there, he was just yelling into a blue screen. I thought, my God, if you were there, he would have looked insane."

One of the most memorable scenes involves Bully almost flirting with an old woman called Momma M at a gas station – another of those improvised scenes in which nonactors create a sense of verité amid the fantasy. Ronan said, "She took on this different character with Matt. He was great, and stepped up to do whatever she wanted to do." It's that vitality of spirit that, for Ronan, means there's no reason to give up on Motor City yet. "There's a sadness to Detroit," she said, "but there's also a life that's trying to burst through the surface. It went from being one of the most important cities in the world, and then it all started to fall apart, but that's what's fascinating about it, that it has gone full circle." 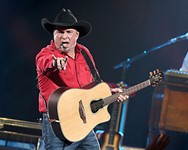 Playback: Starf**king SXSW
SXSW’s bubble burst? Sure, okay – if you say so. Leave the starfucking to us, then. 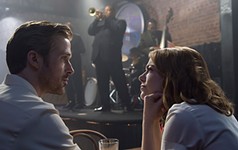