Drive-in Nights at the Blue Starlite 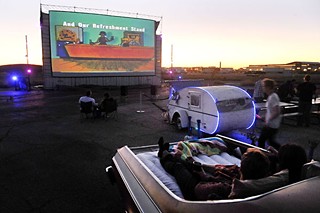 One of Austin's most unlikely success stories, the Blue Starlite Drive-In, is celebrating its fifth year of showing movies the way they were meant to be shown all this summer ... by which we mean cinematic bliss under the stars, on four wheels, with things going hot 'n' heavy in the backseat, and mustard all down your front.

Really, though, the bizarre fact that no one had thought of creating a "mini-urban drive-in" in Austin prior to Blue Starlite's owner/founder/programmer Josh Frank is what boggles the mind. After all, during the drive-in boom of the late Fifties, Texas alone hosted nearly 400 outdoor theatres, many with multiple screens. These days, there are fewer than 20, with the majority slain in the Seventies and Eighties due to the rising cost of real estate, as well as the advent of VCRs and cable television.

Three springtimes ago, in "Blue Starlite at the Studio," we reported that Frank had struck a deal with Austin Studios (which is managed by the Austin Film Society) to lease a multi-acre plot of unused land to permanently resettle his twilight movie-time dream project.

The move to 1901 E. 51st has turned out to be a smashing success on all counts, with a brand-new, amazing colossal screen measuring 35 by 21 feet. Add to that the expanded space, which allows for up to 120 carloads of film-fan families and cinephiles seeking a way to watch both classic and new movies far from the maddening crowds and parking challenges of, for instance, the Alamo Drafthouse Ritz, and you've got drive-in heaven all over again.

Speaking of which, the Alamo and the Blue Starlite have struck a deal to screen an ongoing series of titles from Drafthouse Films distribution throughout the summer. Next up is The Visitor (April 10-11), and Spring (May 6-9).

"I thought it would be a really cool way to collaborate," says Frank. "The Alamo Rolling Roadshow had screened a movie at our old location, and I've always been looking for a way to unite these two one-of-a-kind Austin movie theatres, and showing Drafthouse Films is a great way to do that. This is creating a template for what I've always wanted to do, which is to have regular, independent movies at the Blue Starlite."

In addition to the Drafthouse Films programming, Frank has also kicked off the drive-in's first annual Fantasy Fest with a slate that includes classics by Ridley Scott, John Carpenter, and Terry Gilliam. All that's missing are the Edsels, and frankly, we're cool with that.

Five years ago, Frank was running an art co-op/studio at 2326 E. Cesar Chavez when he came up with the idea to utilize the building's then-empty side lot as a mini-urban drive-in theatre. Ebay provided the Fifties-era window speakers, a wall splashed with a rectangle of white paint provided the screen, and the rest is totally Austin DIY history.

"My original notion," says Frank, "was to do it as an art installation every weekend for two months and then when people stopped showing up I'd stop, too. But people just kept showing up!"

And they're also showing up at Frank's second Blue Starlite venture in Miami, Fla. But that's how genius ideas germinate, right? Like something you vaguely remember seeing at the drive-in with your mom and pop way back when. Like, maybe, the pods from Don Siegel's 1956 drive-in staple Invasion of the Body Snatchers. "They're here already!" hollered the great Kevin McCarthy. "You're next!"

For schedule and reservations, visit www.bluestarlitedrivein.com.