The Zellner brothers mine urban legend in Kumiko, the Treasure Hunter

David and Nathan Zellner's haunting new film Kumiko, the Treasure Hunter, is the Austin-based siblings' most ambitious and technically accomplished movie yet. (Among their previous features are Kid-Thing and Goliath.) Featuring a remarkably internalized performance from Oscar-nominated Rinko Kikuchi (Babel) in the title role, the Sundance and fan favorite finally opens in Austin on Friday. Prepare to be unnerved, astounded, and emotionally transported into a world that, while subversively similar to our own, plays out like someone else's half-recalled fever dream ... that is, if cinematographer Sean Porter and soundtrack scorers the Octopus Project were standard-issue collaborators within our collective, dormant subconscious.

It begins with a tracking-battered VHS title card: "This is a true story." Well, sort of: Kumiko is loosely based on the factual, if still murkily mysterious story of Takako Konishi, a Tokyo office worker who was found dead, inexplicably, outside of Detroit Lakes, Minn., in November 2001. That's 9,240 kilometers and, apparently, the perfect distance traveled to fuel the Internet's Department of Wild Speculation. Prior to her lonely demise, Konishi had been found wandering by the Bismarck, N.D., police and, in a tangled mishmash of cross-cultural, linguistic misunderstandings, rumors surfaced that she had sojourned all that way to search for the buried suitcase of blood money buried by Steve Buscemi's character in the Coen brothers' entirely fictional 1996 film Fargo. That film also began with the "This is a true story" tag. Despite its emotionally freighted tone, Kumiko is not without the Zellner brothers' trademark moments of absurdist levity.

"[The bizarre story of Takako Konishi's death] kind of grew bigger and bigger online," explains Nathan Zellner. "This is before Facebook and Twitter, so it didn't spread as instantly as it would have now. But there was information about a Japanese woman going from Tokyo to Minnesota looking for the fortune from the movie Fargo. I think it was the limited amount of information that drew us in. And also, like a lot of people, we wanted to believe it, you know? But it was the legend that drew us to the story in the first place, and that's what we wanted to be true to."

Kumiko, the Treasure Hunter begins when lonely, bored "office lady" Kumiko discovers a moldering VHS copy of the Coen brothers' film Fargo and comes to believe that what she's seeing is not a fictional Hollywood film, but instead some sort of documentary. Off she travels to the frigid climes of the upper Midwest to seek out Fargo's frostbitten suitcase of cash, armed only with a crudely stitched map and exactly the wrong sort of wardrobe. Persistence, however, Kumiko has in spades.

Watching the Zellner brothers' fictional take on a story that already seemed surreal to begin with is a heady, dreamy experience. Shot on location on the staid side streets of Tokyo and the bleak whiteouts of Minnesota, Kumiko, the Treasure Hunter is the Zellners' profound re-imagining of the classic quest tale. At least there are sneaky, unexpected slivers of hope riddled throughout the film; Kumiko is an ode to contemporary outsiders of all stripes.

Nearly a decade passed since the brothers first conceived the idea and actually filmed it – enough time for Kikuchi to become passably fluent in English (although our interview was conducted with the help of a translator who, in a Zellner-esque twist, sounded exactly like Kikuchi herself).

"About eight years ago they sent me the script," recalls Kikuchi, speaking on the phone from New York with her translator at the ready. "I read it and I was falling in love with the character, so I met [the Zellners] in L.A. They were so unique to me that I decided that I was going to make this movie. I decided that almost eight years ago."

In the meantime, Kikuchi was nominated for an Oscar for her supporting role in Alejandro González Iñárritu's bad-vibe triptych of 2006, Babel. In 2011, she won the hearts and minds of Fantastic Festers with director Katsuhito Ishii's Funky Forest. While the Zellners – along with producers Chris Ohlson, Alexander Payne, and Georgina Pope – were busy working up the funding for Kumiko and tackling the ridiculously complex logistics of a multinational shoot, Kikuchi broke big in both Hollywood and arthouse circles. 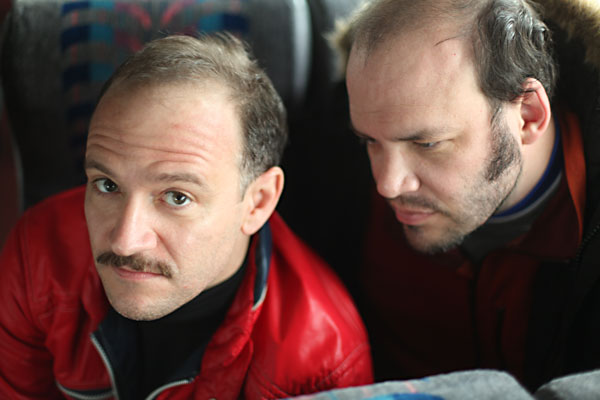 "They were always coming up with interesting ideas," says Kikuchi. "I was, like, 'Are you guys capable of thinking about anything other than the movie you're making?' The time that I spent making that movie was a very special time for me. It was a film unlike anything I had ever done or had ever been asked to do."

"We met her in 2008," says Nathan Zellner over a bubbling bowl of étouffée at Ruby's BBQ, "and then there were another four years until we were able to go start filming and so, yeah, in the meantime she really did learn English."

"When we saw Babel," adds brother David, who also has a substantial role in the finished film, "we knew she'd be a good candidate based on that. And then we met with her and she got the tone of what we were going for right away. It's a very delicate tone for the film – that balance of the humor and the pathos or melancholy – and she totally dialed into that right away."

Most low-budget indie films would evaporate after eight years of pre-production, but the Zellners kept busy shooting and releasing other features and shorts, and occasionally turning up in friends' projects.

"Kumiko took forever for myriad different reasons." explains Nathan. "Because it was weather-dependent, we had to work around Rinko's schedule, and financing was tough. But we still wanted to make it as real and authentic as possible. We just broke it down by figuring out what the cost would be to shoot [the half of the film that was set in Japan], and what was the minimum amount of people we would have to take over. It was the two of us, [producer] Chris Ohlson, and Director of Photography Sean Porter."

Filming finally commenced in Tokyo in the fall of 2012, after which the production had a 48-hour turnaround before heading back to the States to begin pre-production in Minnesota.

As for the complexities of figuring out how they were going to find a crew, gear, and begin shooting, David explains, "There was a lot of Internet searching. There wasn't a lot of stuff in English, so I was looking online at films that we liked that were shot there and then seeing what companies were involved. We're fans of the movie Enter the Void, so we looked up that production company, contacted them, and they turned out to be the best match for us."

Scouting locations turned out to be more problematic: "There were a couple of leads that just didn't pan out," says David. "There weren't as many bilingual resources as one would think. The reason the project took so long was because some of it was shaky financing, some of it was having to work around everyone's schedule, and then having two different crew bases line up. It was like we shot two features back-to-back, basically."

The Zellners' finished film is a sublime masterpiece with subtextual commentary on quiet, dreamy outsiders trapped inside a modern, global media-frenzied milieu. The end result may be intentionally enigmatic, but Kumiko's through-the-looking-glass plight riffs on an increasingly common theme in a decidedly uncommon fashion. And you can't help but wonder, as the film progresses from Tokyo to Fargo, if Joel and Ethan Coen have seen it, and if so, what did they think? (The Zellners say they are unsure either way.)

"We've had such a great reaction to [Kumiko]," says David Zellner. "It's not like offers are flooding in, and that's fine. I mean, we're pretty particular about what we want to do. And thankfully we have enough ideas of our own to where we're not relying at all on [the commercial] success of Kumiko. It would be fun to adapt something if it was the right project, but if not, we'll just keep making our own stuff and stick to that baseline."