Gems for the Taking

AFS plunges into the criminal underworld 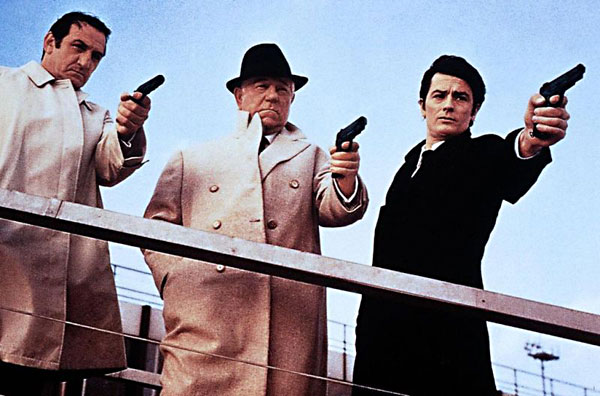 Spring is here, and while that might conjure up thoughts of rebirth and renewal, the folks at the Austin Film Society have been preoccupied with crime and punishment. Their latest series, Perfect Criminals: The '70s French Noir Connection, revisits the glory days of Euro-crime dramas. In conjunction with Drafthouse Films, which is releasing The Connection – the other side of William Friedkin's The French Connection – AFS picked some seminal classics, as well as some hidden gems.

Series opener, The Sicilian Clan, features a trifecta of French movie stars: Alain Delon, Jean Gabin, and Italian-born Lino Ventura. Delon plays Roger Sartet, a cutthroat thief who escapes custody with the help of Gabin's character's mob family. They devise a plan to steal a fortune in jewels, but the enterprise is complicated by Le Goff (Ventura), a police captain obsessed with recapturing Sartet, doggedly circling his every move (while also trying to quit smoking). Henri Verneuil's adaptation of Auguste Le Breton's novel features stylish direction and a great score by Ennio Morricone. The scene in which Sartet beats a large eel to death by slamming it repeatedly against some rocks must be seen to be believed.

No French noir series would be complete without the great Jean-Pierre Melville, and AFS has programmed two of his finest films, Le Samourai and Le Cercle Rouge. In the existentialist masterpiece, Le Samourai, Delon plays a hitman who strictly follows the Bushido code. Seen by eyewitnesses after completing a contract, Delon's Jef Costello is picked up by police in a roundup, but is eventually released due to his airtight alibi. When his employers decide that killing him would be a lot easier than paying him, Costello goes after them. Melville's intoxicating cinematic style coupled with Delon's mercurial portrayal of a dead man walking make Le Samourai the distilled epitome of cool. Melville returned to urban crime, and created his magnum opus with 1970's Le Cercle Rouge. Ostensibly a heist film, Melville follows three strangers – jewel thief Corey (Delon), escaped con Vogel (Gian Maria Volonté), and alcoholic ex-cop Jansen (Yves Montand) – as they plan to rob a highly guarded jewelry store. Famous for its nearly silent heist sequence that lasts almost half an hour, Le Cercle Rouge is also a culmination of Melville's obsession with masculinity, loyalty, and the lives of marginalized outsiders.

Next up is Claude Sautet's elegant and rarely seen crime film, Max and the Junkmen. Michel Piccoli plays the titular Max, an independently wealthy police officer who, after being thwarted by bank robbers one too many times, concocts a plan to catch them in the act. After running into an old army pal, Abel (Bernard Fresson), who now works as a scrap collector, Max tries to lure Abel and his "junkmen" into committing a bank job so he can catch them in the act. The plan hinges on Lily (Romy Schneider), Abel's girlfriend and a prostitute, whom Max, pretending to be a lonely banker, hires to feed the gang information. Can you say entrapment? Sautet skillfully undermines our expectations throughout the film, and by the last scene, you realize you were watching something else entirely. A beautiful film with understated performances, Max and the Junkmen is French noir at its finest.

Rounding out the series is The Burglars, with Jean-Paul Belmondo and his group of thieves heisting emeralds from a Greek industrialist's Athens mansion by using one of the most inscrutable safe-cracking devices in the history of cinema. But when their escape plans are delayed, they have to lie low for a few days. Enter Omar Sharif as a corrupt cop who would very much like those emeralds for himself. Featuring an amazing car chase around Athens and great stunt work from Belmondo, this one has it all, including an entertaining treatise on Greek food by Sharif, an extended cameo by Dyan Cannon, and a hilarious excursion to one seriously schizophrenic erotic nightclub.

So, make sure that raincoat is cinched up tight, and your fedora is on straight. Stock up on Gauloises and check the oil on your Citroën (don't forget to check the trunk), because you can never be sure how close les flics are to barging in and spoiling the whole plan. Chances are, they're right behind you.

All screenings are at the Marchesa Hall & Theatre.