Why Are My Phone Pics Not Works of Art?

It might not be the gear, but the photographer 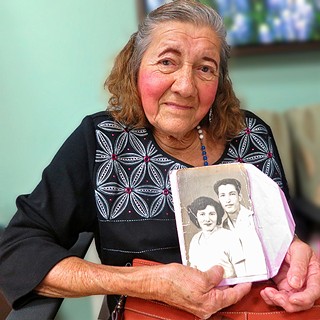 Caroline was at the hospital waiting for word on her daughter. At 77, Caroline's face was distinctive and beautiful. I approached from across the room, took a knee, and asked if I could take her portrait. I was testing out a medium format film camera I'd bought on eBay for cheap, I explained. From her purse, Caroline pulled out a photo of her with her husband in 1955 and held it in her lap. Snap. Then I took a digital pic. Snap again. Email to Caroline's family. Post on Facebook.

Here's the deal you already know: That film camera is a relic. It takes beautiful photographs, but I haven't had a home darkroom since the Nineties, so the film will go into the mail (once I get around to it) to a processing house which will snail mail it back to me. The pink of Caroline's cheeks will likely be more vibrant, the soul reflected in her eyes more soulful, but time will have marched forward.

Joseph Nicéphore Niépce took the first camera-shot photograph in 1826 or 1827 in France, and it can be seen in the lobby of the University of Texas Harry Ransom Center. Since then an estimated 3.5 trillion photos have been snapped. But at least 20% were taken in the last couple of years, most using a cell phone. "The best camera in the world is the one in your hand when the photo happens," says Stephen Alvarez, a National Geographic photographer who will talk at a session titled Nat Geo Captures the World for Nokia, With a Phone. "For most of us it is going to be a camera phone. Certain phones ... now produce images that rival DSLR cameras. The gap between traditional cameras and phones is going away fast."

Yet it can be difficult to sift the art from the piles and piles of pics of babies, food, blurry sunsets, and duck-faced selfies shot in the bathroom mirror.

"There are 2 billion camera phones in operation right now, and we are being crushed by the weight of all those images," Alvarez says. "Picking the good from the bad is as important a skill as making a good picture in the first place."

To make art, you have to master the art of seeing. The pro looks for the frame, sees the repeating lines, waits for the moment to walk into frame. French street photography guru Henri Cartier-Bresson called it the decisive moment, that split-second when the art appears and just as quickly vanishes.

Maybe your cell phone snaps aren't art yet because you haven't mastered the monkey tricks (any monkey can learn them). My first newspaper writing job required me to purchase a decent camera and a few lenses. My boss told me two things: Fill your frame with your subject and look stupid while you shoot – crouch on the ground or climb a ladder. He was teaching me the monkey trick of perspective. Throw in the rule of thirds and golden ratio (look them up) and you've got a barrel of monkey tricks.

But the real photo pros will tell you it takes practice – i.e., a lot of failure – to make art. Want to be a brain surgeon? Practice (on someone else, please). Want to be a novelist? Write every day. Want to make artful photos? Practice making art every day instead of relying on Instagram filters. Maybe six times a year you will succeed. If you're lucky.

Art is a glimpse into what it is to be human. Art is discovering a little corner of truth and sharing it with a larger world. It's in the walking across the room and meeting Caroline instead of settling for the wider shot of an older woman half hidden behind a helium-filled balloon reading "Get Well Soon!"