When the Beat Reporter Packs a Pipe 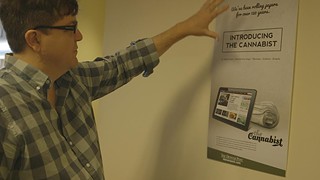 In all of journalistic fantasy, there are few scenarios more desirable than the one that involves marijuana becoming legalized and so centrally intertwined within your publication's editorial vision (as well as its ad revenue) that your editor's left with no choice but to send you on a reporting trip to South America. Longtime Denver Post star writer Ricardo Baca probably didn't imagine it happening like so, but that's exactly how it played out. In November 2013, after Colorado and Washington separately voted to legalize the plant within their borders, Baca took control of the Cannabist, an online sidearm of the Post devoted entirely to the reefer.

Denver filmmaker Mitch Dickman spent the Cannabist's first year in chase of Baca and his staff – a three-man motley crew comprised of Denver's most staunch and studious stoners (as well as a few non toking Post stringers more deeply rooted in traditional reporting). Rolling Papers is his takeaway; 79 minutes of culture concerning those out covering the culture.

"That's what made the project so interesting and was what we were looking for at the beginning," explains Dickman, who's making his debut at SXSW. "There have been a lot of documentaries about pot; that wasn't really as interesting, especially since that debate has come and gone in Colorado. People want to know what it's like. We're not the first people to [look into that], but to frame the conversation through a journalist – and specifically at a newspaper that was struggling – has been interesting."

More interesting than comparative pot coverage, adds Dickman. While The Seattle Times has pot reporter Bob Young and Denver's alt-weekly Westword has long focused coverage around state legislation concerning marijuana, Dickman notes how no publication has yet devoted ink to a city's makeup wherein pot is legally present. Colorado has burnouts, but it also has mothers, fathers, and kids who suffer seizures. It inhabits businessmen and chefs, photographers and manufacturers. It has guys who used to sell weed illegally who are trying to find a way to feed their family. They're who filled the corners of the Cannabist's coverage, and what ultimately brought Dickman to the pot desk.

"We definitely didn't set out to make a stoner documentary," he continues. "We could've shot a whole film during [Denver's infamous April 20 celebrations], but we wanted to shy away from that. There have been a few reality series that have been picked up recently – Pot Barons [of Colorado] – that tend to focus on the business aspect. I had a feeling that side of the story would get covered by other people. We didn't want the suits or politicians. We wanted to see what it would be like for the parent, or this editor, or these journalists who don't smoke pot at all. We looked for nuanced characters and people we found interesting."

Central to Rolling Papers is Baca, an easygoing veteran of the Post's music section. An occasional smoker who approached the Cannabist's coverage as though it was the state's biggest news story – indeed, it still is – Baca's journey culminates with an explorative trip to Uruguay, the first country to decriminalize weed altogether. Still, with his mild-mannered approach to news stories and low-key profile in conversation, he didn't exactly jump out as the most obvious type of lead.

"I knew Ricardo, and at first wasn't sure that he could carry a film. We set off not knowing and got to know him through the process," says Dickman. "I knew he was a mellow guy and pretty laid-back. In today's age, that can be a bit challenging to tell a story with. He never really got that upset. Any of the things he had to deal with, he never really showed that much emotion. I actually find that likable, and hopefully it comes off the screen as well."

A version of this article appeared in print on March 13, 2015 with the headline: The Weed Bureau