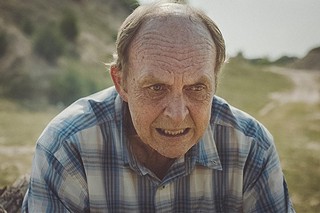 Generating hardcore, knuckle-gnawing suspense on a microbudget indie isn't an easy thing to do, but Chicago-based filmmaker Steven Piet's debut feature Uncle John nails it. Fair warning: Bring a Band-Aid or two, lest you ooze some red on your trousers.

Possibly the most subversive aspect of Piet's film is that for the first 60 minutes or so it plays like two completely different movies that have been skillfully intercut. One half of it revolves around a contemporary office romance between graphic designer Ben (Alex Moffat) and his winsome new manager Kate (Jenna Lyng), while the rest of the story lies on the titular Uncle John (John Ashton), first seen disposing of some, let's call it "evidence," in a bonfire in rural Illinois. What's the connection between these parallel storylines and, more importantly, why does this taciturn, crusty old uncle cause you to break out in gooseflesh every time he scowls? This isn't a horror film per se, nor is it a romance in any traditional sense. Uncle John confounds expectations at seemingly every turn.

"I consider it a two-genre film," says Piet. "That was really the point of it, having both a thriller set in a small town and a romance set in the big city. The contrast between the two is what's cool about it. It's something that I and [co-writer and producer Erik Crary] hadn't seen before."

In a film loaded with pitch-perfect performances, it's John Ashton's ominously internalized turn as Uncle John that's the real revelation. Best remembered as Beverly Hills Cop's Sgt. Taggart, franchise foil to Eddie Murphy's smoove criminal Axel Foley, he's all but unrecognizable here (the vanishing of the trademark mustache throws you). At 67, his weather-beaten face has become more cinematic than ever. Stoop-shouldered yet burly, Ashton's Uncle John is the very essence of middle-American disquiet.

"We did our own casting since we didn't have any money," Piet explains. "I ended up making a list of actors that I've always liked but hadn't seen in a while and then we just sent off copies of the script to them. John responded and said he really loved the script and agreed to do the part. He just wanted to act. And he was so down with the whole process of it."

The end result is a performance that treads the fine line between chilling and avuncular, the sort of character you might spot chewing the fat at the local diner with the other old-timers. Except this salt-of-the-earther has a helluva lot more than mud on his hands.

Asked what was the key to making such a gripping and narratively unique film his first time out, Piet says the secret was setting hard and fast dates to stick by.

"We told ourselves that we're making this film and we're going to do it in six months. No matter what. If we couldn't get enough money to get the camera we wanted to shoot on, then we'd shoot it on a Canon 5D. We made sure everything was adaptable to those dates."

"You can talk about making a film until you're blue in the face," Piet says. "Stop talking about it. Take that leap. It's the scariest part, but until you do it you're not a filmmaker."