What if you found your long-lost twin on the other side of the planet? 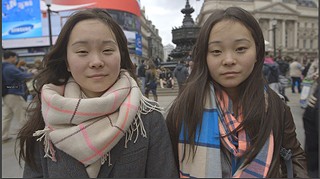 It's the kind of thing that happens only in fairy tales – twins, separated at birth, adopted by different sets of parents in different parts of the world, each growing up with no knowledge of the other until a chance sighting reunites them as adults. Could it happen in real life? That's exactly what Anaïs Bordier – a French fashion design student living in London – wondered when a friend showed her a YouTube video featuring an American actress with whom Bordier shared an eerie resemblance. It didn't take much digging (i.e., Facebook stalking) for Bordier to discover that she and her Los Angeles-based doppelgänger, Samantha Futerman, were both South Korean adoptees born on the same day in the same year in the same place. Bordier reached out to Futerman, and by the grace of Facebook, two strangers living thousands of miles apart on a planet of 7 billion people found each other, and bam! – instant connection.

It is at this point that the Twinsters story picks up, seen largely through the eyes of Futerman, who realizes early on that this very surreal experience should probably be documented. She records her first Skype session with Bordier, a three-hour conversation they end reluctantly, with Bordier confessing, "I really need to go to the loo." Futerman then enlists the help of filmmaking friends and friends-of-friends, including Hawaii-based cinematographer Ryan Miyamoto, who becomes her co-director. "Before going into it, I was like, 'What happens if she's not her twin?'" says Miyamoto. "That was actually one of the scariest parts of the filming. I was like, 'Oh God.'"

"All signs pointed to yes, but there's always that chance that it's not true," says Futerman. In fact, the first thing she and Miyamoto shot was a lecture about a doppelgänger study. "It was about people who look so identical and just have no relation at all," she recalls. The likeness Bordier and Futerman share is truly uncanny, and part of the joy of the movie is in witnessing not just the incredulous stares they receive from friends and family (which still happen, says Futerman) but the way they stare at each other, entranced. It is their palpable connection that drives the film. When they see each other, says Miyamoto, it's as if they're diverting into a part of childhood they didn't have. They "turn into 6-year-old girls," he says. "It was really cool to see – and really weird."

Before Futerman and Bordier crisscross the ocean to meet in person, the narrative unfolds largely through texts, emails, video blogs, and Skype chats woven seamlessly into the documentary format. "We're on social media all day," says Futerman. "It was just kind of what happened, and then we needed to figure out kind of a clever way to demonstrate it." Miyamoto also pointed his camera at Futerman nonstop for roughly 40 days. "He would have to eat with one hand while he was filming," she remembers. The result is an intimate and mesmerizing portrayal of the emotions awakened when the two adoptees explore a past they had never fathomed.

"We made the decision to document the process, and so part of that decision was saying, well, whatever happens happens," says Futerman. "If I'm being a B one day, then I'm being a B." Spoiler alert: Futerman is not much of a B. She is by turns goofy, sweet, brave, and uncensored. Describing what it was like to meet Bordier in person, she says, "I could feel every bone in my body, all the air in my body, and it was just like my heart was in my butt." Fairy tale, meet documentary.