When the three-way includes his dead ex 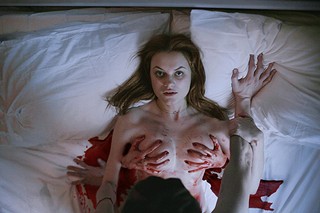 "We never thought of it as a horror movie to be honest," says Ben Blaine, one-half of the award-winning UK film and video making firm the Blaine Brothers; brother Chris supplies the other half. "But it's certainly a film that fans of horror movies will get a lot out of. We hadn't set out to scare anybody with it, but it's definitely playing with those kinds of genre rules."

Nina Forever, the darkly comic yet decidedly serious debut feature from the Blaines, skillfully combines everybody's worst nightmare – the ghost of your dead ex materializes every time you try to have sex with your new partner – with a subtextual commentary on grief, loss, and moving forward in the face of oblivion. Dreamtime dead girls are a dime a dozen; Nina is personal.

"Much of our stuff is a lot more upbeat, brighter, and sunnier. We're not always dealing with death, grief, and sadness. But I think everything that we are dealing with, we tend to go through a slightly kind of sideways, fantastical way of looking at things."

"A lot of our shorts are kind of built around a fantastical conceit," explains Blaine, "like, for instance, our film "Hallo Panda," which is a little bit like Nina, but with a bear instead of a dead girl."

Buoyed by a trio of standout performances from Cian Barry, Abigail Hardingham, and the exceptionally wicked Fiona O'Shaughnessy as the late lover Nina, Nina Forever adroitly, often hilariously, explores that landmined emotional no-man's-land betwixt love, death, and closure (or lack thereof). And then there's the eternally vexing question of "What now?"

For the Blaine Brothers, that particular question was pressingly relevant, hinging as it did on a Kickstarter campaign not to fund the entire film, but specifically a spectacular car crash sequence, which by its very nature necessitates the presence of police, fire personnel, EMTs, and flaming automobiles.

"I think we're very used to filmmakers going on Kickstarter and [asking for funding]," says Ben, "and that always seems slightly, kind of, 'Well, no. Can't you fund it? That's sort of part of your job.'"

He continues: "A lot of the impetus for me was that we were at a point where we really wanted to make a feature film, and all the other projects we were trying to do were not quite the right thing. So we decided to just do something that we wanted to do, something that we felt really passionate about. We said rather than asking permission [via crowdfunding] to make a film, let's just make a film. And as soon as you kind of give yourself that momentum, then, suddenly, you're not asking permission to make a film, you're making a film and asking people to join in. And that's a really attractive thing to do."