What if you beat your bullies with a message of love? 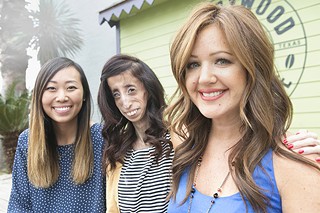 Lizzie Velasquez takes her bullies' word daggers and reshapes them into teaching tools – a superhuman feat for most, a path of healing for Velasquez. It's actually her humanity, in all its beautiful, painful glory, that gives her the wisdom to channel emotions into positive change. She's all about the love, even for her most vicious bullies: "I know they must be going through something worse than I am, and unfortunately, I'm just the one they take it out on," she says. "But I can still be the one to turn things around for them, so I can't be mad at that." A Brave Heart: The Lizzie Velasquez Story chronicles her remarkable rise to motivational champion of more supportive communities online. "It's a movie with my face," says Velasquez, "but it's not just me. It's everyone."

Born prematurely with a rare syndrome that caused her blindness in one eye and an inability to gain weight, Velasquez's school experiences were particularly harsh. A loving network, plus her natural effervescence and determination, helped, but nothing could totally prepare the Austinite for the Internet's dark side. When she was 17, Lizzie saw her face featured in a stranger's YouTube video titled "World's Ugliest Woman." Her revenge? First, forgiveness. Then, a staggering, growing list of global-scale accomplishments and her own YouTube channel's viewership in the millions. And finally, ongoing work lobbying on Capitol Hill to pass the Safe Schools Improvement Act, the first federal anti-bullying bill.

Director Sara Hirsh Bordo explains, "Lizzie is an individual with a story and a spirit that simply has no parameters – not age range, not gender, not demographic or psychographic. Her story is needed, her strength is needed by a lot of people."

Bordo had no plans to make a film, until her path crossed Velasquez's at the 2013 TEDxAustinWomen event, produced by Bordo's company Women Rising. It's been a full-speed, purpose-driven journey since. "I can't imagine us premiering [the film] anywhere else but SXSW," Bordo says. "This is as close to a child as I've ever had, and I really want my baby to find a home before I'm 90 miles per hour down the road on another project. This is our life, but it's her life, and her family's life, so we're just going to be protective about where it ends up."

After 25 years of uncertainty, Velasquez and her family learned her diagnosis, a moment captured on film – a "terrifying" experience, Velasquez says. "It will never be the norm for me – no matter what I do, no matter what scale it is. People knowing about your life is never something that you just get used to." But Velasquez is adamant. "I don't want people to feel sorry for me. At all. I want them to leave [the film] and feel empowered for themselves and, hopefully, for other people."

That feeling of empowerment, of inspiration, spread to the crew, too. Editor Christopher Roldan, whose credits include Terrence Malick's To the Wonder, says, "I was so inspired. Honestly, it would wake me up out of bed and I would start editing.

"I usually do things that are more serious and dramatic and, well, depressing. Her story is much more uplifting and I wasn't really sure I could do it justice, but you know, once I started seeing the footage, I was kind of blown away. Lizzie has this kind of way of winning over people that is amazing, and the more I got into the footage, I noticed she has a kind of magic to her that you don't see very often."

Capturing Velasquez's essence and finding a cinematic balance – not Lifetime/Hallmark, but not all "gut punches" either – was a challenge, but Roldan took his cue from Velasquez's own balance of buoyant humor and unabashed optimism. "She's kind of Rocky."