Gazing at the Texas Film Awards Through a Crystal Ball

The gala event celebrates its 15th 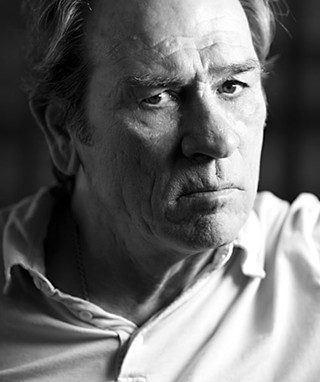 They say the 15th anniversary is the crystal anniversary, and that's what the Texas Film Awards will be celebrating on Thursday, March 12. The Austin Film Society's star-studded celebration of Texas filmmaking – past, present, and future – benefits the artistic and educational programs of the organization, which includes the AFS Grant that funds productions by promising emerging filmmakers throughout the state of Texas.

Presiding over the event will be animator and filmmaker Mike Judge as master of ceremonies. The Office Space director got his start in Austin, and is also the creator of the animated TV shows Beavis and Butt-head and King of the Hill, as well as the live-action HBO show Silicon Valley, which begins its second season next month.

The 2015 inductees to the Texas Film Hall of Fame include Tommy Lee Jones, Luke Wilson, Bonnie Curtis, Guillermo del Toro, Christopher Evan Welch, and L.M. Kit Carson. The awards to Welch and Carson are being given posthumously, and del Toro, a former Austin resident, will be inducted as an Honorary Texan. Variety's Creative Impact in Cinema Award will be given to Boyhood. Director Richard Linklater and stars Patricia Arquette and Ellar Coltrane will be in attendance to receive the award.

With a career that spans more than four decades, Tommy Lee Jones hardly needs any introduction. The actor and director is a native son of Texas and still resides here. His acting has been acclaimed for roles he played in Coal Miner's Daughter, JFK, Men in Black, and Lincoln, among many others, and he received an Oscar and Golden Globe for his performance in The Fugitive and the Best Actor award at Cannes for his screen work in The Three Burials of Melquiades Estrada, which he also directed. Also acclaimed is his recent direction of and performance in The Homesman, and his starring role in the Academy Award-winning film No Country for Old Men.

Producer Bonnie Curtis got her start in the film business as an assistant to Steven Spielberg, and continued to work with the legendary filmmaker for 15 years as a producer on A.I.: Artificial Intelligence, Minority Report, and Saving Private Ryan, for which she won the Producer of the Year award from the Producers Guild of America. Branching out into independent-film producing, Curtis' credits include The Chumscrubber, Albert Nobbs, The Face of Love, 5 to 7, and the upcoming film starring Ewan McGregor, Last Days in the Desert.

Dallas native Luke Wilson is no stranger to the Texas Film Awards, having served as the master of ceremonies at last year's event. Well-known for his performances in the films of fellow Texan Wes Anderson, including Bottle Rocket, Rushmore, and The Royal Tenenbaums, Wilson has also created memorable performances in such films as Old School, Legally Blonde, Charlie's Angels, The Wendell Baker Story, Anchorman: The Legend of Ron Burgundy, 3:10 to Yuma, and Mike Judge's Idiocracy.

Guillermo del Toro, whose Pan's Labyrinth scored three Oscars, is an internationally acclaimed filmmaker, making films as technically elaborate as Pacific Rim and as intimate as The Devil's Backbone and Cronos. While residing in Austin during the late Nineties, del Toro worked on The Devil's Backbone and Blade 2. He has branched out into producing the films of others and counts the movies Mama, Rise of the Guardians, and The Book of Life, among others, to his credit. He is the creator and executive producer of FX's TV show The Strain, now in its second season.

The actor Christopher Evan Welch will receive a posthumous award at the event. He played the character Peter Gregory on Silicon Valley, and was featured in memorable roles in the films Vicky Cristina Barcelona, The Master, and Synecdoche, New York.

L.M. Kit Carson will also receive a posthumous award. A legendary figure, his contributions to the art and business of filmmaking in Texas and abroad are too numerous to contain in a single paragraph. From his first film, the groundbreaking David Holzman's Diary, to his last film, which was shot on a smartphone, Carson was always part of the creative vanguard. See the accompanying story for a more profound appreciation of Carson's career.

Bill Wittliff, screenwriter of The Black Stallion and The Perfect Storm and executive producer of Lonesome Dove, will present Tommy Lee Jones with his award. Actress Jess Weixler, co-star of The Disappearance of Eleanor Rigby and The Face of Love, will present to Bonnie Curtis. Mike Judge will present the award to his friend and star of Idiocracy Luke Wilson, as well as to the family of Christopher Evan Welch, costar of Judge's show Silicon Valley. Robert Rodriguez will present his pal Guillermo del Toro with the Honorary Texan award. Del Toro and Austin Chronicle Editor and SXSW co-founder Louis Black will present the award to the family of L.M. Kit Carson.

The Texas Party, which unfolds after the gala, is the official afterparty of the Texas Film Awards (and the unofficial kickoff to SXSW, which begins the following morning). This year, the Texas Party is dedicated to a celebration of the Texas-made hit Boyhood, and will serve as the film's official welcome-home bash. Performers at the show will be treated to an all-vinyl DJ set by Wooden Wisdom (Elijah Wood and Zach Cowie) and DJ Mahealani. For tables or party tickets see www.austinfilm.org.