History in the Emulsion

Austin's past is recorded in its films 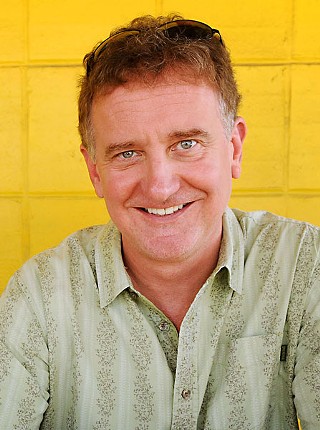 The bothersome caveat that has always been a part of life in Austin – no matter when you first showed up – is perfectly summed up in Nancy Higgins' short documentary from 2005, "Viva Les Amis": "There was always something that was really cool," opines former cafe owner-turned-cabbie Newman Stribling, "and you shoulda seen it, and it was the best thing in the world ... but it's gone and now it's not here anymore."

As the future bears down and devours the city's past and present with talons of rebar-reinforced concrete and teeth of razored, sky-scraping glass and steel, one of the most reliable and readily available sources of what came before is, apropos of everything, film. We're not just talking about public-domain loops and newsreels. When it comes to the movies, be they big-budget Hollywood productions, local indie films, or historical/left-field docs, Austin has always played a major role in playing itself.

Enter director/producer Mike Blizzard and the feature doc Also Starring Austin – a possibly quixotic quest to document the city's culture and growth over the course of 40-odd years via the movies that have been shot here.

"My original idea," Blizzard says, "was to string together a series of scenes from films shot in Austin, but I quickly realized there were a lot more than I thought."

No BS, that. Everything from Bill Wittliff's Red Headed Stranger to the Coen brothers' Blood Simple to Bob Ray's seminal, scenester Rock Opera preserves a specific moment in time – or a dozen years, in the case of Richard Linklater's Oscar-nominated Boyhood – in and around the city of Austin.

"Chale Nafus at the Austin Film Society, which is a fiscal sponsor of the project, told me I had to watch a film called Los Angeles Plays Itself," says Blizzard. "I watched that on YouTube and I began to realize there was a more cultural component and not just the physical changes to the city over time. Los Angeles Plays Itself has a certain polemic, an axe to grind, but what it taught me was that there was much more to this project that stringing together a bunch of scenes."

In 2012, Blizzard set about hiring a team of interns from the AFS (where he is currently a board member) and began delving deeper into the cinematic history of the 512, going back at least as far as Tobe Hooper's Eggshells (1969) and that director's groundbreaking The Texas Chain Saw Massacre (1974).

"[The films] have to have some historical significance," says Blizzard, mentioning, among others, Eagle Pennell's debut short "A Hell of a Note" (1977) and the 16mm footage of Austin's notoriously debauched early-Eighties Woodshock festivals (shot by Lee Daniel). "They have to have led to someone's career or showed some aspect of Austin at the time. Obviously, we can't put every short that's been made out of the [UT] RTF Department, no matter how great it is."

While far from complete, Blizzard hopes to have Also Starring Austin in the can, or at least ready for festivals, by 2016. In the meantime, the production is interviewing everyone they can think of, raiding the Texas Film Commission's trove of film-related photos and documents, and attempting to corral as much relevant footage and ephemera as possible. After that, of course, comes the mind-bending task of editing it all together into a coherent whole.

"If you've lived in Austin a long time," Blizzard says, "you don't see it with fresh eyes anymore. I'm not telling the story of this place, I'm curating the story of it. The films and the people who were there tell the story, and it's an evolving story."

So what's the one Austintatious constancy the project has discovered so far?

Laughing, Blizzard says, "The one consistent thing that I've noticed by watching all these films is that people keep coming to Austin! They come, and they're blown away and excited at this community because it's different to them. And you see that [not only in real life but] in movie after movie after movie."

For more on the project, see www.austinfilm.org/sponsored-projects/film-also-starring-austin.