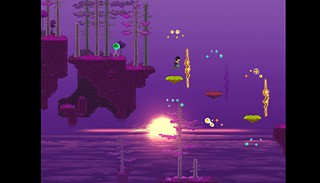 
"Violence is a complicated issue. Now go shoot everything between you and that goal." It's such a popular video-game trope that the dissonance barely registers anymore. Few games take the time to align what it tells you with what you actually do. The team at Swagabyte Games took this lesson to heart when they created Disorder, a 2-D platforming game that explores grief and mental illness. It's a disparate dichotomy. Can a style of play popularized by those lovable scamps Mario and Luigi offer insight into schizophrenia and emotional trauma? Disorder proves it can, as players run and jump their way to a kind of resolution. The controls are simple: left, right, jump, duck, and ... uh, swap worlds. Every level has a twin with slight variations in environment and player interaction. A simple tap offers access to that twin realm allowing entry to previously inaccessible areas. Disorder offers little hand-holding, which works well with the intuitive challenges and forgiving difficulty curve. By the end, alternating between sides of the dark mindscape becomes a reflex, and both the story and the interaction tell the same, difficult story.


It may be a "walking simulator," but I'm Null is one strange stroll. This free browser game from local game-maker Zak Ayles and sound designer Robin Arnott drops players in a world that consists of darkness, stark landscape features, and sculptures that look like three-dimensional line drawings. Headphones are recommended as you explore the colorless realm because distant sounds often lead to the next interaction with a pyramid, graveyard, or even other players. The vast quiet and dark spaces weigh equally on the mind as players stumble their way around in search of the next encounter.


If having your fortune told just doesn't feel legit unless a digital, dancing monkey is assisting, then Monkey Fortunetell is for you. Local digital artist Rachel Weil (aka Party Time! Hexcellent!) helped create this self-described "glitzy glitching mystic divination." It's equal parts interactive art and prognosticator, assuming you trust life decisions to primates.


Vertical Golf turns the iOS sensation Desert Golfing on its ear. Actually, on its side. Instead of the infinite side-scrolling of the original, VG puts the tee in a deep chasm and the hole high above. It doesn't have the lonely elegance of DG's soul-crushing landscape, but it's hard to say no to a fun and free challenge to while away a few hours.