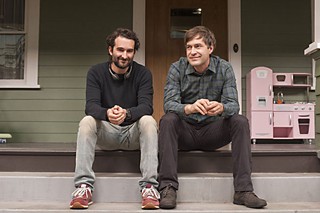 There are only so many hours in a day you can set aside to watch television, that resurgent usurper of your precious time. If you're like us, your weekends have already been canceled or are experiencing technical difficulties – please stand by – thanks to binge-a-thon viewings of The Americans, Fargo, Transparent, and oh, God, you did see the full run of True Detective, right? Of course you did. We all did. And we're all positively quaking in anticipation of HBO's ne plus ultra of the small screen, Game of Thrones Season Five, which kicks off in April. So little time, so much excellence to watch.

And now you're about to be utterly hooked on the new HBO series Togetherness. Created by the formerly Austin- and now Los Angeles-based filmmaking sibs Jay and Mark Duplass (The Puffy Chair; Baghead; Jeff, Who Lives at Home), the show revolves around the emotional minutiae of thirtysomething life and marriage in the Eagle Rock neighborhood of L.A.

Togetherness manages the not inconsiderable feat of being both brutally honest and sublimely hilarious in its dissection of the pitfalls of approaching middle-age in a culture too often defined by hipster youth. The Duplass brothers direct all the episodes, which they wrote with their frequent collaborator Steve Zissis, who also co-stars in the show with Mark. The series – there are eight half-hour episodes in Season One – features Mark Duplass and Melanie Lynskey as the increasingly unsatisfied couple Brett and Michelle Pierson, with Zissis and Amanda Peet as their equally emotionally-at-odds friends Alex and Tina. And it's perfect. No spoiler alert necessary, and no hyperbole, either: The final episode of the first season generates more heart-in-the-throat suspense than any theatrical movie or television series we've seen in the last year.

The Austin Chronicle spoke to Jay Duplass from his home in Eagle Rock about the brothers' long-form television debut, the Austin filmmaking community's imprimatur, and the narrative gulf between movies and television series.

Austin Chronicle: I have to ask if Mark and Melanie's characters' surname, "Pierson," is a shout-out to indie film and SXSW supercouple John and Janet Pierson. Is it?

Jay Duplass: It's funny that you ask that because Janet sent us an email immediately when the synopsis came out and was like, "Guys, what the fuck is going on?" But no, it's not a reference at all, we just liked the name. We do love John and Janet to death, but it wasn't anything that we came up with consciously."

AC: So how did you and Mark hook up with HBO? Had you been hankering to try your hand at a television series for a while, or did this just sort of happen organically?

JD: After we made The Puffy Chair, HBO was one of the first people to continuously call us back in and talk to us about ideas. We've always had a relationship with them, but Togetherness in particular was really no different from any of our other ideas that we've come up with. It was birthed out of the private conversations that Mark and I had with each other about the weird, embarrassing, and desperate things that we and our friends were doing. Usually we cringe about it and then start giggling uncontrollably.

AC: You're both married with children now, right?

JD: Yeah, we both were in our 30s with two young children and we were just laughing and being mortified at the same time. For us at that time, [people] were like, "There's these two Austin kids who are becoming these titans in Hollywood" while every night we were getting our asses handed to us by 12-pound infants who were, like, threatening the very fabric of our sense of well-being. We were just getting brought to our knees by our kids and attempting to find that balance between being a good family person while keeping our own dreams alive. We felt like we were an inch away from drowning at all times.

And then when we started talking to all of our friends about it, they all felt the same exact way. There was this other cohort of people who were not married, or maybe didn't have any traction with their careers yet, and we were secretly jealous of them and they were secretly jealous of us. They were desperate as shit, too, and terrified of their own life situation.

All of the scenarios that kept flooding in as [Mark] and I were talking about [Togetherness] were just scene after scene of tragically funny stuff. We were like, "This is so much bigger than a movie!" So we brought it to HBO, they loved it, and they supported us the whole way.

AC: Going from the early days of the so-called mumblecore movement to Hollywood features via Cyrus and Jeff, Who Lives at Home, and then to HBO seems like a monumental shift for you guys. Was that difficult at all?

JD: Having a broader narrative arc is a huge part of it. We've always been weirdly obsessed with the subtlest forms of narrative plotting and also the very realistic ways that the plot twists of our real lives happen. We've been trying to communicate that and convey that in narrative feature form, but I think there's something about long-form television that's really [attractive] to us.

First of all, it's an open universe. What I mean by that is things continue on and on. You still have to open plots and close plots, but in terms of the emotional evolution of a character? You don't have to close that stuff up, and you're actually rewarded by continuing to complicate that and make it more elusive and then run with it just the way that human beings do. So in a weird way, just because we are sort of vérité filmmakers, the [television] form is more naturally suited to what we're trying to do.

Also, you get to know these characters over time. I'm sure you picked up on it. By episodes six, seven, and eight, we're doing tiny things that are having a huge impact because you know the characters so well. You know what that turn of phrase means when the person says it, and it's just devastating. We don't have to do that fake thing where they have a big, drag-out fight down by the river with gorgeous lighting. The artifice of having to close emotional storylines at the end of a feature film is a natural function of the craft and the form of making a feature film, but it's an ugly word, "artifice." There isn't nearly as much as that in this type of television.

AC: Were you and Mark big TV aficionados growing up in New Orleans?

JD: We were raised on Cheers. All of the Diane episodes of Cheers we've probably seen four or five times. Apiece. It was on at our dinner time at 6:30pm and we'd sit down and eat dinner and watch Cheers at the same time every night. It was very, very magical. [HBO's] Six Feet Under was the really massive breakthrough for us in terms of serialized, long-form storytelling where we realized that this thing was moving in a line, over the course of years, like some sort of gigantic movie.

AC: You've got a whole bunch of Austinites working on the show, correct?

JD: Right. Our director of photography on Togetherness is Jimmy Shelton, who shot David Zellner's Plastic Utopia when they were 22 years old. Our editor [Jay Deuby] is from Austin and I've been working with him since we were 24 years old. A lot of our department heads have come up just as our friends and we've sort of grandfathered them into the unions because they didn't rise up through the unions. They were our buddies who we just wanted to continue to work with.

JD: You know, everyone asks us if we're getting influenced by Hollywood and the truth is, if anything, Mark and I fight the other way to maintain our brotherly, telepathic connection. And that also includes all the Austin ethics of working with your friends and your family, doing things DIY, and creating things by hand, basically. That's really important to us because it creates a tactile feeling of the way of making the movies that we came up with in Austin: Make it fast, cheap, and then let the world take care of it. 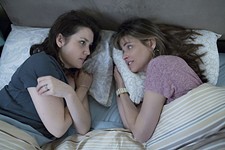 I Like to Watch
Girls and Togetherness: straight white people crying