Where once there was Spill.com, there is now DoubleToasted.com and OneOfUs.net When talking to Korey Coleman about Spill.com, the now-defunct movie review website he founded in 2006, he's well aware that people are familiar with the roots of the organization. "Everybody's heard these origin stories," he admits. However, it's a story worth revisiting, especially since the heroes are once again returning to positions of influence in the world of online film commentary. It's the tale of five movie lovers – Coleman, Martin Thomas, Chris Cox, Tony Guerrero, and C. Robert Cargill – and how they built something grand, lost everything but their fans, and carried on with their heads held high.

Up until its closure in December 2013, Spill was an Austin-based hub not just for movie fans, but also lovers of comics, TV, podcasts, and video games. With over 48,000 registered members at its peak, Spill was successful enough to launch an annual convention, Spill Dot Con. The site set itself apart from countless other review sites by including animated reviews with rapid-fire humor. Coleman was in charge of animation, a task he refined through his experience at the Heart of Texas Productions studio, as well as Austin cable-access favorite The Reel Deal.

The Reel Deal was where Coleman began to assemble the crew that would eventually become the mainstays of Spill. First was Tony Guerrero, a devoted fan who was fresh out of high school. Then came Martin Thomas, a graphic designer and former comic book colorist. Chris Cox gave up one of his bartending shifts to help out. Cargill joined soon after, and then there were five. For an entire decade, The Reel Deal was a laid-back place to joke about movies. "It was 10 years of just goofing around," Coleman recalls. "It was like our poker night on Wednesdays."

Spill was the spiritual successor to The Reel Deal, and it took off like wildfire. People from around the world showed up at Spill Dot Con. Visitors who met on the website's forums started dating and getting married. The five guys who got together to crack jokes about movies ended up making some very real emotional connections with fans. But eventually, things started to change at Spill. The site was bought by Hollywood.com in 2009, and while the initial pay raises that came with the acquisition were warmly welcomed, troubling signs slowly began to pop up. The Hollywood staff would eventually lose interest, and on December 20, 2013, Spill was taken down. "Unless we could make lots of money, there was only so long they were willing to pay us to tell dick jokes on the Internet," Thomas notes in an irreverent eulogy of sorts.

Here's where the old origin stories stop and the new ones begin. If you've come here looking for the tale of five critics, irritated and resentful at the collapse of their beloved site, then you've come to the wrong place. "Everyone thinks I have anger behind this," Coleman says. "It's business, man. I got eight good years out of this company. I have no bitterness toward [Hollywood] at all." That might be the most interesting revelation out of all this: Spill was not the be-all, end-all goal. It was just one step in a larger, more fragmented journey. 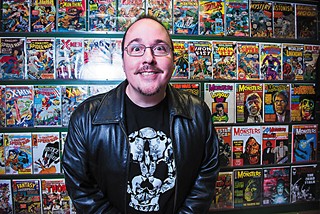 In the months following the dissolution of Spill, the critics regrouped and focused on new projects. Well before the shutdown, an amiable parting of the ways seemed imminent. "Even on their best days," explains Coleman, "I could tell people kind of wished they were doing their own thing, and I didn't begrudge them that." So, rather than keeping the whole crew together, the group split up to home in on their individual passions. Downsizing from the larger Spill staff was also a welcome change. "I think what we were doing was too big. I think it's best to concentrate on something smaller when you're starting out," Coleman observes.

One of the new projects falls under the leadership of Chris Cox. He's now one of the minds behind OneOfUs.net, a site whose mission statement proudly declares itself a "one-stop hub for all geek passion." Looking at Cox's house, it's clear he certainly lives up to the statement. He has Muppets Most Wanted playing on a large TV screen, and his cat Monkey is weaving its way through tall stacks of DVDs and memorabilia. A full-size Yellow Lantern power battery is sitting on his mantle. He says that the network of podcasts he's put together is what sets OneOfUs apart from other similar sites. "We constantly trade back and forth off one another's podcasts, we film short videos, [and] there's a lot of excitement within the community and the staff itself."

Tony Guerrero is the one Spill critic who has chosen not to pursue new endeavors in the world of film, electing instead to focus on his family. Cargill, on the other hand, has started to gain recognition in the world of movies far beyond Austin. He cowrote the 2012 horror hit Sinister, published the novel Dreams and Shadows last year, and is now hard at work on two more big-screen adaptations – one for the Deus Ex video game series, and one for a Harlan Ellison episode of The Outer Limits. His colleagues are hardly surprised that he's found such success. "I actually lived with Cargill for a couple of years," Cox recalls, "so I can tell you how hard that guy worked when he wasn't making any money."

As for Coleman and Thomas, the downtime between Spill's shutdown and their eventual next project was short-lived ... just three days long, to be exact. "I was ready to leave the country," Coleman says. "I was going to move to Turkey, and I was just going to spend some time writing and drawing, because I hardly had any time to do that on my own." He might have followed through with that plan had Austin magician Brian Brushwood not encouraged him to hang on to the audience he'd worked so hard to build. A Kickstarter campaign was launched with the goal of $30,000, and within days, Coleman and Thomas collected more than four times that amount. They now had the funds to start DoubleToasted.com, their new site.

Predictably, many former Spill users have now migrated to both DoubleToasted and OneOfUs, but in an age in which new movie review websites pop up weekly, what sets them apart from the rest of the voices in the crowd? The consensus seems to be one word – personality. Thomas points out that actual film criticism is now less of a priority than building shows around the personalities of the hosts. "We have our movie podcast that we do in the middle of the week, but most of the other shows are more free-form," he says. Coleman reiterates the need to be unique. "There are billions of people on the Internet, millions are doing podcasts and blogs, and I'm sure there's another subdivision of those millions doing movie reviews," he remarks. "If you don't have a personality that connects with people, then they're going to listen to the person that does connect with them. Why do you know some directors by name, and some you don't? Why do you know Quentin Tarantino? You know him because of his movies, but also because you constantly see him out there being a personality himself." It's an apt comparison – Tarantino famously said he didn't go to film school, he went to films. This is the Spill style of movie criticism, alive and well today. Academic background in film study is welcome, but it takes a backseat to relatability, quick banter, and a general understanding of what makes a movie tick.

Armed with a wealth of personality, both DoubleToasted and OneOfUs want to be recognized as a couple of the strongest options in the rapidly flooding market of online film commentary. "It's definitely as crowded as it could possibly get," Cox says. "Everybody wants to do their own thing, and I think a lot of it's just the fascination with the newness of it all." Thomas agrees that the landscape may be getting oversaturated. "It's so prevalent that it almost loses its value, which is why we try to do something different with it." But the proprietors of the sites are quick to point out that they aren't rivals. Cox is very complimentary of the DoubleToasted crew, and the feeling is mutual. "I think Chris has done a great job of taking whatever he can take from this experience [at Spill] and making something new out of it," says Coleman. "I admire him for that."

Coleman, Thomas, and Cox all have their eyes set on the future, but they don't mind looking back on the past. When asked how they want Spill to be remembered, they all instantly talk about the fans rather than themselves. "It gave so many people who feel like outcasts one home, where there were other people like them," says Thomas. "They felt like we were friends, they discovered new best friends. And you know, the spirit of it still lives on." Cox is also surprised by how far the site's influence once reached. "I have this enormous array of friends now, across the globe, because of Spill. That'll always be one of the most valuable things to ever happen to me," he states. Looking ahead, though, Coleman frankly acknowledges how quickly this could all disappear. "I'm very realistic about this. If I can't sustain it, there's always Turkey."

The Cool Keeps On
Fourteen years after AICN woke up the Web, three Austin film sites carry on the tradition