Where Does It Hurt?

With The Inside Story, Scott Rice gets people talking about mental health 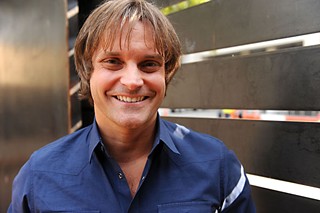 Whether it's performers facing stage fright, artists dealing with depression, or students facing down finals by self-medicating and consequences be damned, seemingly everyone in Austin knows someone who suffers from some sort of mental health issue. We're just that kind of town. Despite our Prozac Nation-plus status, there's still plenty of social anxiety – itself a major stressor – attached to actually coming out and saying that, Yes, I may seem perfectly normal on the outside but that's only because the meds are masking the fact that I'm trembling like a leaf in a gale on the inside.

So how to counter that social-secret stigma without (or potentially in addition to) costly psychotherapy couch-surfing sessions? The Internet, as always, has birthed a solution, and its name is the Mental Health Channel. And its secret weapon? None other than Austin's own two-time Student Academy Award nominee Scott Rice, who's helmed six episodes and counting for the channel's innovative and accessible online series The Inside Story.

The Austin Chronicle sat down with Rice to discuss the ongoing series, his work with the MHC, and the importance of being Thor.

Austin Chronicle: How did you get this gig anyway? It's a really fascinating way of broaching subjects that a lot of people might otherwise shy away from.

Scott Rice: I knew Harry Lynch, who started the Mental Health Channel, from grad school when he was an MFA in [the University of Texas] screenwriting program. That was back around 1999. We'd always wanted to work together so he just came to me with the idea of shooting something for the channel. My first instinct was, "I'm too busy, I've got all this other stuff going on." But when I thought about it I realized I really had a lot of passion for this cause and for getting awareness out there about mental health issues. I think we don't talk about it enough in our culture. There's a lot of shame surrounding it and self-medication, too, especially amongst artists, filmmakers, comics, musicians. The channel is going to be national and then international at some point but it's starting here in Austin and I felt this was just something I had to do. I've had my own mental health struggles. I've struggled with depression. Everybody has something, you know?

AC: Especially in the current "faster, bigger, better" environment we're inhabiting. The daily stressors seem to multiply by the week.

AC: As a filmmaker, how did you go about approaching the various people in each episode?

SR: The producers at the Mental Health Channel find the subjects and then find and interview the people. The way the process works, the Channel has an idea of what the story is, I then go and pre-interview the subject and really get to know them and establish a trust. I want to see what gets them jazzed, what they want to talk about. After that I develop an outline for the shot list, come up with specific questions, and then go from there.

SR: Well, young people are the ones who really don't want to talk about this kind of stuff. In addition to [the web series], the Mental Health Channel also asked me to teach a class at UT where the students make documentaries about mental health issues. The impetus behind that was to get younger people to talk more about mental health, because they're [the demographic] that just don't want to do it. People who are older and maybe have been through therapy and have gained a little bit more wisdom and life experience, they're the ones who are willing to talk about this stuff. Young people are very afraid that their peer groups might judge them. I think it's a healthy thing. When my sister died, my coping mechanism was to make a film about it and that became my pre-thesis film. I think creating art from those struggles is really cool.

AC: You profile ex-Shearwater and current Swans drummer Thor Harris, who suffers from major depression. That particular episode is really the perfect example of an artist living with a mental disorder who uses his creative talents to vanquish those demons.

SR: Absolutely, Thor's a great example of a guy who uses art to manage his disorder. His depression is just a thing, it's there, it's not a big deal, and we should consider it as being like any kind of physical problem. His brain doesn't regulate the chemicals right and so he's prone to depression. But he takes medication for it and he does all these other things that enrich his life. He has a great circle of friends, he has a support system, he has his art, he has pets that he loves and is close to and which bring him comfort and happiness and joy. We need to talk about [mental health issues] more, and show that it doesn't need to be hopeless.

AC: Were you familiar with Thor prior to shooting the segment?

SR: No, I didn't know him beforehand, but he's the kind of guy who's so easy to befriend. He's so articulate about his particular disorder. He's really thought hard about it, and researched it, and he can help a lot of people. Part of his mission is to help people and to help people get the kind of tools they need to combat something like depression. And that's one of the things that I've discovered. People who go through this kind of stuff and find wellness through successfully managing their disorder, they want to give back. I just talked to a 16-year-old who was sexually abused when he was 4 and he's very mature about [his situation]. He went through EMDR [Eye Movement Desensitization and Reprocessing] therapy, which mimics REM-stage sleep and helps you process traumatic memories. He's come out of that successfully and now he's devoting his life to developing and breaking in cutting-edge medical technology to help cure other people who have experienced this kind of stuff. That's really exciting because there's a [mental health] epidemic in this country that no one wants to talk about. But we gotta talk about it.

AC: Although it almost feels taboo to mention it, there's even some self-deprecating humor running throughout Thor's story that really helps the viewer to connect on maybe a more emotional level than they might be able to otherwise.

SR: Yeah, we're actually doing a series on comics. We have a contest going called Cracking Up Austin with 10 comics competing to see who can be the most humorous while integrating mental health into their routine. That's happening in November, but we'll be following five of the comics for a Mental Health Channel series. It's all about how [mental disorders] are like any other part of life. We can laugh about these struggles and show that it's not deadly serious all the time. It's just like life. Life is hard and sometimes you have to bring some levity to it.

AC: Ultimately, what's the goal of your series?

SR: We're hoping that people who may be afraid to talk about their own struggles can look at some of these documentary films and see that there's light at the end of the tunnel, you know? Here are people just like you who have, sometimes, very severe problems like schizophrenia or bipolar disorder, but they have taken action to manage them and live their lives.

The Inside Story: Depression, Thor's Story

Watch more episodes of The Inside Story at www.mentalhealthchannel.tv.

Go Faux!
The fake perils of Pop Rocks in Web series 'Never Do This'