These days, we carry our entire lives around with us in our smartphones. To lose one's device would be a kind of death – yet not as devastating as the loss of a child. Surely. But when threatened, which do you grab first? In a crisis, who do you protect first? The answers may tell you all you need to know about a person ... or a spouse. In the Swedish film Force Majeure, a carefree family ski vacation becomes the unlikely canvas for hashing out the age-old questions of nature vs. nurture, instinct vs. impulse.

Force Majeure is Sweden's official entry for Oscar consideration. Writer/director Ruben Östlund's film won the Un Certain Regard Jury Prize in Cannes, before going on to wow North American crowds in September at the Toronto International Film Festival and Austin's Fantastic Fest. In Toronto, I had the chance to sit down with the filmmaker for a conversation.

Setting the film in an Alpine ski resort came naturally to Östlund, who entered filmmaking by making ski films. Force Majeure he describes as "a chamber piece taking place in this extraordinary environment: up on those mountains, in the ski resort, in the hotel. To have a cast that is quite small, almost a bit alone there, it's almost like a Shining feeling in the hotel."

To the commentators who describe the film as an exposé of masculinity in crisis, Östlund sees that as too limiting: It is sex roles in general that are on display. "I think there's a contract between a man and a woman and the roles that they are supposed to play in a couple or a family. Expectations of the man are that you should stand up for your family if there's some sudden threat, and the expectations of the woman are to take care of the family on longer terms. I have a friend who was also an inspiration for the film. He and his wife were in the Philippines and there was a military revolt, and for a couple of days they weren't allowed to go out on the street. Then they were allowed, and they went to a mall and clothing store, and suddenly the staff were screaming, 'Throw yourself down on the ground. There's someone here with a gun.' The girl threw herself down, she's in the dressing room and my friend is just outside. But he runs away and throws himself behind the counter. And afterward, they were arguing about this for about half a year. It was really, really close that they split up. And every time she was a little bit drunk, she was like, 'You know what Phillip did? He tried to save himself,' and he's like, 'What do you expect me to be? Some action hero and protect you from the bullets?' 'What do you mean? No, I think if we're going to die, shouldn't we die together?' But it's an absurd discussion about this event. You could see that it's harder to forgive than we believe."

Yet there are many lighter touches in Force Majeure, such as the one in which the wife calls her husband's bluff when he starts crying. Remarks Östlund, "A friend who saw the film and said, 'Well, you know that fake cry? For men, the opposite is the fake orgasm for women.' That's so good. All the men I know have fake-cried sometime. The scenes that I like most are when it can be both horrifying and humorous at the same time – or a second later. And also when the audience is not 100 percent sure how they should react." 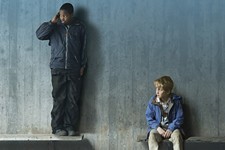