Mess With the Genres, You'll Get the Horns 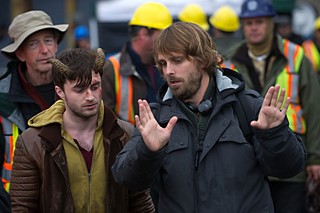 Daniel Radcliffe and Alexandre Aja on the set of Horns

Joe Hill's 2010 novel Horns is a prime example of the "new weird" strain in American genre fiction, part whimsical meditation on the judgmental devil inside us all, part grisly wish-fulfillment fantasy, and part hell-blasted, dark fantasy romance for a pessimistic, post-millennial readership. It is also a damnably unlikely novel for big-screen adaptation, but Alexandre Aja, one of the leading purveyors of the so-called New Wave in French horror – his breakout film High Tension remains a gutsy shocker 11 years on – has done both book and its author proud with a feature version that mixes outright horror, gallows humor, and doomed romance into one of the most original films of any genre this year.

It certainly doesn't hurt things that Aja's film stars former teen wizard Daniel Radcliffe as Ig Perrish, the tormented protagonist who becomes both persona non grata and public menace No. 1 after his one true love is found raped and murdered. As if that weren't enough to drive a man to hell and back, Ig soon discovers a pair of horns budding from his brow which give him the ability to see the rank and lascivious innermost thoughts of the locals in his small town. It's a – you'll pardon the pun – helluva performance from Radcliffe and a terrifically original film in its own right. Finally, a Halloween horror show that isn't either a sequel or a retread.

The Chronicle spoke to Aja at the film's Texas premiere at Fantastic Fest 2014 about the book, Joe Hill's involvement with the film adaptation, and the importance of getting those horns just right.

The Austin Chronicle: What's the backstory on you landing this project? Were you already familiar with Joe Hill's work?

Alexandre Aja: I was in post-production on Piranha in Toronto and my agent sent me the galley of the book. I read it and from the first chapter I knew I had to find a way to make it happen. I contacted Joe Hill and found out that the book was already optioned by producer Cathy Schulman at Mandalay, with Shia LaBeouf attached. There was no script yet, but apparently things didn't go the way they thought they were going to go, and so a few weeks later Cathy contacted me to say Shia LaBeouf was gone and I was in as director.

AC: Playwright Keith Bunin is credited with the script, but I was wondering how much input, if any, Joe Hill had going in? As the son of Stephen King, you'd figure he might be a little gun-shy about having his work adapted by someone else.

AA: Joe was very involved. It was the first time of one of his books was going to be turned into a film and I couldn't imagine making this movie without him. I knew that sometimes a writer can have a hard time with an adaptation of his work, but from the beginning Joe was here and he knew that I was defending his work and trying to make sure that it didn't become just another horror movie, or just a dark comedy, or lose all the flashbacks, you know? I wanted to embrace every element that makes the book such a unique and cult novel.

AC: How did Daniel Radcliffe become involved? He brings a very gritty, down-to-earth vibe to a character and story that are anything but.

AA: Watching the movie now I can't imagine anyone else playing the character, but to be fully honest I was not even thinking of him to begin with. I knew that we had to find someone who was going to be the link between all the genres within the movie, kind of like James Stewart was in It's a Wonderful Life. The film needed someone who could make a fable like that but, you know, with all this darkness and demonic things.

The book was a huge success when it was published and Daniel had read it. He came to us and said, basically, "I want to play the role of Iggy, please meet with me." That was right before he did The Woman in Black. We met with him and of course it was strange for me, because, you know, he was still Harry Potter in my mind. It was only during the reading that I realized he was so much more than that. He read the part as exactly the character that I had imagined when I first read the book. He had the deep, dark romantic commitment, he was funny, he really embodied the character. I talked with Joe Hill about [Radcliffe's possible involvement in the production], and he said, "Yes, it's obvious, he's the only one who can do this." I mean, who else can be Ig Perrish, who else can be the face of this generation and the entry point into this fable for the audience? I think the audience will realize that Harry Potter was the beginning of something [for Radcliffe] and Horns is the beginning of something else, a new chapter in his career.

AA: Right. There were three big challenges to the movie. There was the challenge of keeping all the different genres straight and managing to have a story that doesn't feel like we are changing channels on the TV all the time. Another challenge was the time frame, because of all the flashbacks. The third challenge was the horns themselves, because as they were described in the book they were much more like Halloween props, pointy and red. Because I had the chance to grow up in a European city where there were all sorts of representations of God, angels, and devils literally on every street corner, all of them from the first part of the 19th century, I thought it would be better if we used a kind of Gustave Doré representation, which would also be much more romantic. So we used Greg Nicotero and his team from KNB EFX, and they created these wonderful horns that you kind of forget about. For me, it was so important to make the horns not a distraction from the story.

AC: Horns is tonally unlike anything you've had a hand in before. Do you consider this to be a new direction for you? A departure of sorts?

AA: Before this, I made three films here in the U.S. that all had sequels that I was not involved in: The Hills Have Eyes, Mirrors, and Piranha, and so I feel that Horns is the most personal movie that I've made so far. In some ways it has kind of thrown me back to my first feature film, which no one has seen, Furia, the film I made before High Tension. With Horns, I feel as if I was going back to that time, to my 20s, returning to that dark, romantic side of myself as a filmmaker.

Horns opens Friday, Oct. 31, at the Alamo Drafthouse Village and is also available on VOD.