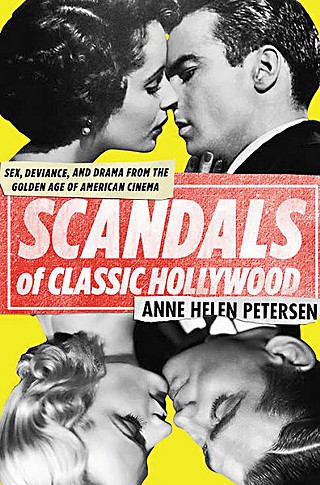 When a celebrity scandal comes down the pike these days, it's usually something really salacious like leaks of nude photos, domestic abuse, severe mental health issues, and Charlie Sheen. We expect our celebrities to go big or go home with their misbehavior; nothing less than a full-on public image immolation will do. And while the celebrity scandals Anne Helen Petersen outlines in her debut book, Scandals of Classic Hollywood, may seem tame by comparison, they are useful lenses through which to view the cultural mores of early 20th century America.

Scandals, a selected compilation of essays Petersen wrote for the online women's magazine the Hairpin, traces evolving attitudes about masculinity, class, sexuality, morality, and public policing of women's bodies through the star images of actors like Rudolph Valentino, Clara Bow, Dorothy Dandridge, and James Dean. In addition to providing a crash course in film history that is accessible to the educated layperson, Scandals sheds light on how far we've come as a culture in terms of what we define as "scandalous."

For example, Petersen's breakdowns of the scandals behind Depression-era bombshells Jean Harlow and Mae West reveal the ways in which women's sexuality was circumscribed and how both women in the Hollywood spotlight massaged their images to make them more palatable to Will Hays' prescriptive Production Code. When Harlow's icy-blond hair became a signifier of her image as a man-eater (the alleged affair with married boxer Max Baer didn't help, either), studio fixers stepped in and not only arranged for her to marry a safe, older man, they also ditched the peroxide and tinted her hair a tamer shade of "brownette." Mae West's bawdy take-it-or-leave-it embrace of the double entendre sent the censors into a tizzy – and made West a very rich woman in the process.

Petersen, who completed her Ph.D. in Radio-Television-Film at UT and now writes for BuzzFeed, has used Scandals to pivot away from academia and catapult herself into the world of being a famous Internet writer in her own right. It's a transition she has embraced wholeheartedly. "When I was writing my dissertation, I always got in trouble for writing too journalistically and telling a story instead of writing in a more traditional style," she says. With Scandals and her work at BuzzFeed, she is "able to give in to the tendency to make things into a readable story while also doing an analysis at the same time."

In conjunction with an appearance at the Texas Book Festival, Petersen has curated a double feature at the Alamo Drafthouse showcasing films that comment on the concerns in the book: It, the 1927 film starring Clara Bow that brought the idea of "It girl" into the cultural consciousness, and Carmen Jones, the 1954 reimagining of Bizet's Carmen starring Dorothy Dandridge and Harry Belafonte.

"The thing that I love about It is that it's a silent movie that shows the energy and vivacity of silent movies," says Petersen. "And it makes a lot of the claims that I make about Clara Bow in that chapter come to life. And Carmen Jones is just a beautiful film, and the [restored version] that's available now is so vibrant and bursting with color. Also, Harry Belafonte is so handsome! It gives you a real sense of just how talented and charismatic Dorothy Dandridge was."

As Petersen describes in her book, even Dandridge's charisma couldn't save her from a penniless end, despite being loved by white and black audiences alike. Because she was black in the Fifties, she failed to conform to society's mores and, as such, was chewed up and spit out by the Hollywood machine. It's a machine built to feed our boundless appetite for stars and stories.

Even though we are sad when a movie star dies of an overdose or laugh when a starlet goes publicly off the rails, we get a dark little thrill of excitement as we trawl the blogs and social media for the latest update. We live in a cultural climate in which celebrity scandals are entertainment in and of themselves. The lesson of Scandals of Classic Hollywood? It girls may come and go and cultural attitudes will shift and change, but schadenfreude is always in fashion.