So you think Guardians of the Galaxy was a gamble?

Yeah, maybe rolling $180 million on a space opera about some scruffy supercrew only comic-book geeks had heard of was dicey, but at least Marvel Studios had in its corner nine prior blockbusters that grossed a collective $6.35 billion. David O. Selznick was a 34-year-old indie producer with one picture under his company's belt – the kidpic Little Lord Fauntleroy – when he plopped down a record $50K (about $850,000 today) for the film rights to what was soon to be the hottest book in the land: Margaret Mitchell's ode to the Old South, Gone With the Wind. Some considered the novel unfilmable, not only because of its historical scope and length – the entire Civil War plus Reconstruction in one 1,000-page fell swoop! – but because the characters were so adored, some questioned whether the public would accept just any Hollywood stars as Scarlett, Rhett, Ashley, and Mellie. Moreover, to get the picture made, Selznick would have to negotiate a minefield of financial disasters, censorship challenges, casting campaigns, protests, and costly studio deals, including one with MGM's intimidatingly powerful mogul, Louis B. Mayer – who happened to be Selznick's father-in-law.

It's safe to say that Selznick's gamble paid off, by any measure. GWTW's box office was boffo from the get-go, selling 60 million tickets in its first four years and earning $35 million (or $500 million today). And it's continued to rake in oodles of cash in re-releases and on video. The movie cleaned up at the Academy Awards, taking home 10 statues in addition to a special award for production designer William Cameron Menzies and one for technical achievement. And it's maintained a special place in the hearts of film fans, who consistently rank Gone With the Wind among the top 10 movies of all time.

As the repository of Selznick's archives, the Harry Ransom Center has what must be the greatest treasure trove of GWTW memorabilia anywhere: memos and letters about every phase of the production, storyboards and concept art, screen tests, script drafts, call sheets, on-set photos, even those beloved gowns worn by Vivien Leigh. So when the film reaches a milestone like its 75th anniversary, you can bet that the Ransom will haul its collection out of storage and share it with the world. And that's just what it's doing with "The Making of Gone With the Wind," an exhibition that opens Sept. 9. This massive look back at "Selznick's Folly" tracks the four years from the producer's initial interest in Mitchell's book to its record-setting night at the Oscars through more than 300 items from the Ransom's holdings. Film Curator Steve Wilson has crafted his own epic narrative that hits all the dramas and controversies that swirled around the film, both the well-documented, such as the heated search for Scarlett among Tinseltown's A-list actresses and just plain fans in the provinces, and the lesser known: the revolving door of script doctors, which included F. Scott Fitzgerald; African-Americans' concerns about the film expressed by the NAACP and in the press, and the battle over the N-word in the script. Along the way, visitors can view screen tests from other Scarlett contenders, those extravagant gowns (lovingly restored, thanks in part to a $30,000 crowdfunding campaign), and some of the most exquisite production art in the history of cinema. (Seriously, the concept paintings by Menzies, Dorothea Holt, and Mac Johnson are worth an exhibition all their own.)

All this is supplemented by a new online exhibition that debuts on Sept. 9 (www.hrc.utexas.edu) and a gorgeous coffeetable book from UT Press, co-published with the University of Texas and the HRC. But surely you'll want to go see these artifacts up close and personal. After all, even if you can see it anytime on video, who'd pass up the chance to see Gone With the Wind on the big screen?

READ MORE
More "The Making of Gone With the Wind" 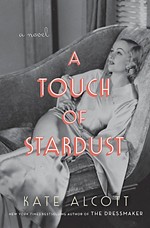