Two Guys, a Girl, and a Puzzle Piece 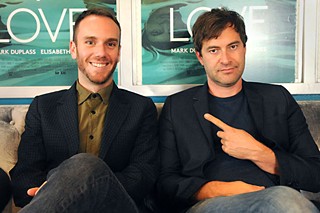 "Indie veteran." Mark Duplass winces at the words, repeating them with mock astonishment as if it hasn't been nearly a decade since he and older brother Jay won over audiences at the Sundance and South by Southwest film festivals with their first feature, The Puffy Chair. The University of Texas alumni have since collaborated on four additional films (including Cyrus and Jeff, Who Lives at Home) while producing other indies, some of which Mark has also starred in between shooting five seasons of the FX sitcom The League.

However, so long as he sits beside The One I Love director Charlie McDowell (son of Malcolm), its co-star and executive producer can't help but take on the mantle of elder: "I started to shepherd and produce films with younger filmmakers, and Charlie was at this place where he was trying to make this really cool 5-million-dollar movie that the industry doesn't really make anymore." After meeting, Duplass offered up the most basic concept of what would become Love. "It had some themes attached to it and what was essentially the central hook of this film. He [McDowell] started developing it with his writing partner, Justin Lader, and then they brought me this 10-page outline, and I'm like, 'We've got a movie. It's greenlit. We're going to make this movie.'"

At a time when major studios couldn't be much less interested in churning out romantic comedies, a love story limited almost exclusively to one location and two stars (Duplass and Mad Men's Elisabeth Moss, though McDowell's stepfather, Ted Danson, makes a cameo appearance) seemed like a relatively small gamble. "We didn't really consider the business of the genre we were in so much as the creative form," said Duplass. "There was a conscious effort on our part to begin this movie like a standard romantic indie dramedy, and then flip it on its head 15 minutes in. We didn't want to be irreverent about it. As much as I love David Wain [Wet Hot Amerian Summer, Role Models], we weren't looking to spoof the romantic comedy. We were looking to exist inside of it and still keep the relationship real and organic, but enter the realm of magic too. In that way, we could keep it playful and not take it too seriously."

Alas, if you're waiting for us to lay out the film's unique premise, the secrecy is very much by design. "We embraced the idea that we went into Sundance with, which was giving very little away in the synopsis," said McDowell, "and then once it screened, the reviews were like, 'This is a cool movie, you should go see it, we're not going to tell you what happens.' We realized that people wanted other people to see it that way as well, so that really excited us."

The marketing campaign to date has been intentionally cryptic, with Duplass and McDowell both hoping that curiosity will win out in a sea of less distinctive independent releases. In keeping with Radius-TWC's usual distribution model, the film has been made available weeks ahead of its theatrical release through cable providers and digital channels such as iTunes and Amazon. On one hand, this strategy allows the opportunity to charge a "pre-theatrical" premium for rentals on par with the average cost of a movie ticket; on the other, it gives a growing number of smaller films the chance to reach a larger audience than ever before.

"We certainly feel as conflicted about it as everybody else," Duplass made clear. "While we love seeing movies in theatres, we want to get as many eyeballs on the movie as we can. How are you getting people in the theatre when you're not telling them what it's about? Maybe it's by having a little swelling of word-of-mouth through VOD [video on demand], people who have discovered this little secret and decided to talk about it." Duplass then pointed out that "the bulk of arthouse audiences are much older and they aren't always watching stuff at home, so I personally don't believe that you are 100 percent cannibalizing your theatrical audience by going out early, but nobody knows anything anymore."

Looking back on his career, Duplass does know one thing: Timing is everything. "I personally believe that, if The Puffy Chair came out now – as much as I stand behind that movie and what it has going for it – I believe we would get crushed in this landscape. No stars, ugly little movie with some heart in it, it wouldn't cut through. I'm lucky that it came out then, when there was less competition, and I feel so blessed now that, yes, while it's hard to get a 7-10 million-dollar movie made at Fox Searchlight anymore, that doesn't matter to me because we still got to make the movie. We have the technology and the means."

For McDowell, moving forward with his first feature meant stowing away his personal admiration for Duplass and Moss. "I felt very lucky and fortunate to work with them, but in terms of Mark being a successful writer/director/producer, I just had to quickly throw that out. I was the director, and I had to focus on that. I didn't feel like I couldn't approach him and talk about stuff, and also Elisabeth. It was a very collaborative experience, and we all just put our heads together and tried to make the best movie that we could make."

Duplass similarly made an effort to keep to his own side of the camera. "I make these movies specifically because it's like being the uncle to a child as opposed to being the parent," he explained. "You get to come in, play with the baby for a couple of hours, and then I leave. This is his thing. While we all collaborated on it, and we all had our voices in there, it's fun for me to be led because I do so much in my life where it's all in my hands."

In that regard, Mark has already reunited with Jay to write and direct the first eight episodes of a new HBO series, Togetherness, to air early next year, and although Charlie is as coy about his own follow-up to The One I Love as he is about the film itself, he sees little use in taking the easy way out. "Ideas that scare me interest me," said McDowell. "The idea of making this movie scared me, and that made me want to do it. The next thing that Justin and I have been working on is taking the high-concept idea again and pushing it to make it feel like a big studio movie, but we're doing it in a small, intimate way. I think that's a really exciting place to play in because you can connect to big audiences who like that high concept, but we're really giving them the character- and performance-driven version of it."

That's just the kind of mentality one expects to hear from an indie veteran in the making.

The One I Love opens next Friday, Sept. 5, in Austin, and is currently available on VOD.

READ MORE
More The One I Love

What'cha Watchin'?
Account Executive Marisa Mirabal has your movie pairings all figured out

The One I Love, Mark Duplass, Charlie McDowell