Kurt Volk's office has no windows. That means more room for posters. Grindhouse. Machete and Machete Kills. Predators. Matador. A whole pinboard of character sheets for the upcoming Sin City: A Dame to Kill For, the sequel to 2005's stylized noir drawn from the comics of Frank Miller. But Volk's not some Robert Rodriguez obsessive completist. This is Volk's work. For a decade, he has been the director's go-to poster designer, creating the iconic images to publicize Rodriguez's unique brand of high-octane filmmaking.

On most major productions, promotion is an afterthought, with cast members returning weeks or months after to take some glamour shots. Volk says, "It can very quickly turn into a magazine cover shoot, where the actor is not the character. He's just himself." By contrast, Volk has his own little studio behind the green screen at Troublemaker Studios where Rodriguez directs the real action. Volk said, "We'll find a little five- or 10-minute window where Josh Brolin can just step over, and he'll be sweating and out of breath, and he'll walk right on to our green screen set, and we can shoot him, and he'll still be Dwight." For the second Sin City, Volk didn't just have access to the cast, but to Rodriguez and his co-director Miller. "Frank's the guy who knows exactly what's going on in the inner lives of all these characters, and knows Marv and knows Johnny. He'll go up to them and whisper something and they'll transform" – Volk snaps his fingers – "into that character. So I have him doing that for me."

Design is in Volk's family. His grandfather owned a clip-art company, and Volk himself studied cel animation at the School of the Art Institute of Chicago, then spent his spare time playing in small bands at local venues like the Empty Bottle and Lounge Ax – "all these indie hangouts and punk clubs," he explains. "By default, I ended up doing a lot of record covers and T-shirts and gig posters." He calls this early work "very rudimentary, cut-and-paste stuff. I presumed I would end up working for an ad company, doing ads for lawnmowers. I kissed away the dream of working in the film industry."

Well, not quite. In 1999, he and his buddy Chris Hrasky spent six weeks camped outside of Mann's Chinese Theatre in Los Angeles, waiting for the opening of Star Wars: Episode I – The Phantom Menace. They filmed the experience, and Hrasky convinced Volk to move to Austin so they could turn their footage into a documentary. When 2001's The Last Hope was done, Hrasky concentrated on his day job as drummer for Explosions in the Sky, while Volk landed an animation job at Trouble­maker on Spy Kids 3-D: Game Over as "a shithead, the lowest rung on the totem pole."

That didn't last long. In 2005, Rodriguez needed someone to design the Sin City coffeetable book, so he just asked around his own offices. Volk says, "The thing about Robert is that he's a jack of all trades, and he doesn't really see departmental distinctions between 'this person just does this' or 'this person just does that.' ... I said, well, I actually have a degree in design, so why not?" When the finished edition hit bookshelves, Volk says, "I had proved to him that I could do something other than fetch coffee." 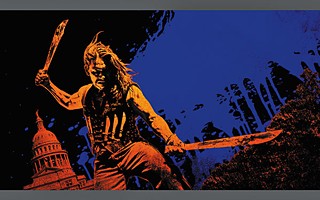 The next project came before the actual film: Knowing Volk knew how to lay out text and images, Rodriguez and his co-conspirator Quentin Tarantino had a special challenge for him. They needed a book – part technical proof of concept, part carny pitch card – to explain to actors and producers what their crazy new exploitation revival project Grindhouse was all about. "I ended up doing the final one-sheet, and the title sequence, and the soundtrack art, and the lobby cards, and the publicity stills, and then I made a formal coffeetable book." He even picked up a 2008 Key Art Award, "which is an award that nobody except movie poster designers care about, but it was really cool, because it was my first for-real, legit movie poster." So followed Shorts, and Machete, and the fourth Spy Kids, and Machete Kills, and the TV version of From Dusk Till Dawn. Now Volk's visual style is almost as synonymous with the Troublemaker brand as that of Rodriguez himself.

Volk's not just on the Troublemaker campus: He's become part of the Troublemaker creative process. "With every project I do with Robert, it usually starts at the pitch stage. Robert will text me and say, 'Hey, tomorrow I'm meeting with so-and-so. I need a logo for such-and-such.'" For Sin City 2, the first image was a pitch poster for Cannes – "this diagonal text treatment that they're still using in some theatres. For some reason, once one of these logos starts getting printed, it just sticks." During production, he creates visual cheat sheets: Rodriguez will take a photo, and Volk will mock up a publicity still or lobby card, so actors can look beyond the green screen and understand Rodriguez's often unique vision. Sometimes, those images become part of the finished publicity, like the key image of Jessica Alba. Rodriguez took a quick snap of her as the vengeance-fueled Nancy and passed it to Volk. "The wind was blowing in her hair and she raised her gun up, and gave him this cold stare."

Sometimes Volk's images even influence the film. For that Grindhouse pitch book, Rodriguez and Tarantino asked him to create fake posters. That was where audiences first saw the movie's iconic images: zombie-killer Cherry in silhouette with her machine gun leg, and Stuntman Mike's car, with its terrifying skull and lightning bolts logo. Volk recalls, "Quentin loved that so much that he had me give it to the art department and put it on the car."

While officed in the Troublemaker complex, Volk is not a Rodriguez exclusive. He has lent his visual skills to many of Austin's new wave of filmmakers, including Kat Candler (Jumping off Bridges, "Black Metal") and the Zellner Brothers (Goliath, Kid Thing), plus the odd poster design for his old friend Hrasky. He knows that Rodriguez has options, too. He says, "When you have movies that cost 20, 30, 40 million dollars, you'll have multiple agencies working on it. They're not bidding on it, they're working on it. So, at the end of the day, it's about who has the best art."

Some artists may rankle at the limitations of movie posters – the standard size, blocks of credits, even actor contractual demands. Volk says, "Sometimes someone's head has to be the same size or larger than someone else's, someone has to be in front of someone else." Yet he equates it to his lo-fi indie band days. "I loved the challenge of fitting all your music on a four-track tape, because it forced me to be more creative. If it were just a blank canvas, I feel like I would be paralyzed."

Not all his work makes it off the drawing board, like the infamous Sin City 2 image of Eva Green as the manipulative femme fatale Ava. Volk said, "It doesn't just look like a woman wearing a nightgown. It looks like a Frank Miller woman wearing a nightgown, and there's totally different laws." For the first Sin City book, Miller gave Volk a stack of original comic art, showing the secret to his brutal but flowing style: Miller draws his characters naked in sharpie, then traces clothing in red pencil over them, then inks the composite. "You could see every nook and cranny of those characters, and it was a very cool education into Frank's work and how his mind works." When Volk re-created that effect for the poster, the MPAA said no. Too much implied nudity, too hot for the multiplex. "She's the dame to kill for, and that's what we wanted to convey. Mission accomplished, I guess."

Now, that image is instantly recognizable as part of the Sin City mythos. It's that strange resonance that a movie poster can achieve. Volk says, "If I see the DVD for Cool Hand Luke, and it's some shitty-looking cover, the real poster for that movie is still in my head. There's something permanent, something that's forever, and I love that." 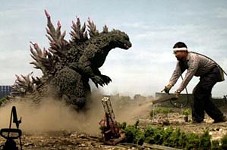 Godzilla vs. the Green Screen
Does the industry need both?