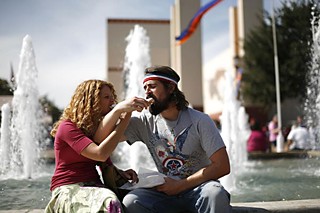 Surely this local gastrojock needs no introduction in a town so thick with foodies and Keeping-It-Weirdos, right?

Even if you haven't witnessed the bearded patriot pigging out at culinary events around Austin. Even if you didn't catch his triumphant appearance on the Cooking Channel's Eat St. a few years ago. Yes, even if you missed him as cover boy and gallery icon for our Food Issue earlier this year, the unstoppable force of ingestion and national pride called Hungry Todd Rungy is probably not unknown to you.

Note: He's about to get a lot more known to you, with 40 episodes of The Hungry Todd Rungy Show debuting on YouTube on Wednesday, Aug. 27, and featuring a new installment of masticating madness each week.

We recently sat down with the sweatbanded champion and, uh, grilled him a little.

Austin Chronicle: Todd, what's it feel like to be so close to the debut of your YouTube show?

Hungry Todd Rungy: It feels great! These film guys have been working so hard for so long, but now that people are finally going to be able to see my adventures, it's going to be worth all the effort. It's like a delicious brisket from Franklin Barbecue or Micklethwait: Sure, it's in the smoker for what seems like forever ... but when it finally comes out, it's all delicious and juicy and gets you excited when you stuff it in your mouth.

AC: Maybe some fans will save up a few episodes' worth and spend an entire afternoon binge-watching your show. What sort of food would you recommend snacking on during that binge?

HTR: I know a thing or two about binge consumption, that's for sure. I think fans should start with some barbecue for the first four or five episodes. For the Torchy's contest in episode five, I think they should move on to some of their delicious queso. Truth is, every episode's got different local foods, and it will make you hungry – so be prepared. Just make sure you're eating for America while you munch and watch!

AC: If Julia Child were still alive, do you think watching an episode of your show would make her laugh ... or cry? 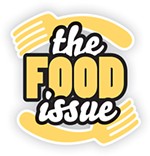