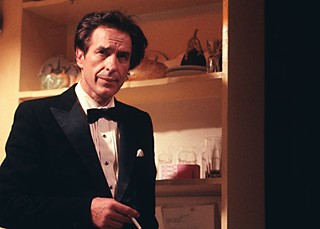 "John wouldn't have liked this, but Love Streams is a film that makes a lot more sense when you know a little about it." That's Austin Chronicle columnist Michael Ventura talking about John Cassavetes' next-to-last film, which was, effectively, the last of the director's releases that could be called "a John Cassavetes film." This long-out-of-circulation film from 1984 was released this week in a DVD/Blu-ray triple-disc restoration by the Criterion Collection ($39.95). Michael Ventura, who was on-set throughout the filming, provides the voiceover commentary, and among the package's many supplements is the hourlong documentary Ventura made about the production, "I'm Almost Not Crazy ..." – John Cassavetes: The Man and His Work.

Love Streams was the seventh film collaboration between the director and actor Cassavetes and his wife, actress Gena Rowlands. It was filmed in their home, like many of their pictures were, but they play brother and sister here instead of husband and wife. It was produced by Cannon Films, under the watchful eye of the storied Menahem Golan, who died just last week. A few weeks after production had started, Cassavetes was diagnosed with cirrhosis of the liver and doctors predicted that he would live no longer than six months. Keeping that knowledge to himself, Cassavetes began tearing apart the script (which was based on a play by Ted Allan), rearranging sequences, and rewriting the ending. The film begins obliquely, practically in mid-sentence, and takes a while for us to understand the characters' connections and impulses.

The following is an edited phone conversation between me and Ventura, who serendipitously became something of a Boswell to Cassavetes' Samuel Johnson during the production of Love Streams. Ventura explains how that came to be.

Austin Chronicle: How did you first come to be introduced to Cassavetes?

Michael Ventura: In 1979 or '80, the now-defunct film festival Filmex in L.A. was going to do a big Cassavetes retrospective, which, at the time, was a tremendous rarity. I wrote a cover piece on John for the LA Weekly, but then John had a fight with Filmex and canceled his films. We ran the cover anyway. (There wasn't a backup cover, and it was a good story.) One of John's friends read it to him, and John said, quote unquote, "This guy is my best friend, and we should never meet or we'll corrupt each other." Not too long after that, he directed Gloria, and I got an interview, very rare, with Gena Rowlands. John apparently liked it, and when Tempest was coming out, I interviewed him. In the midst of the interview (we did that at his house), he said, "This isn't going well." And I said "Yeah, it is. I see it in print as you say it" (because that's what I always did with interviews), and it's going quite well." And he looked at me with that look of his ...

AC: Those eyes are pretty penetrating.

MV: ... and he decided to take my word for it. And he liked the interview. About a year later, I get a phone call at 10 o'clock at night. "Mike, this is John." And I'm going, "Who the fuck? I don't know any Johns." And then I realized as he's rapping – he was obviously drunk – that it's John Cassavetes, and he's calling me. I couldn't have been more shocked. He'd invited me to his Love Streams plays [a group of short plays written by Ted Allan and Cassavetes] about a year and a half before that. I'd gone, and I'd liked them, though I didn't remember that much about them. It's not like they were great plays, but they were fun. And you get to see Peter Falk and Gena Rowlands acting right there in a tiny theatre. I didn't remember Ted Allan's play Love Streams at all. But here was John saying, "We're doing Love Streams. It's going to be all about the dog. It's gonna be this. It's gonna be that. Could you write a diary of it?" And I went, "Yeah."

I got to the set – the set was his house – and there was a big brouhaha going on. There was going to be a big meeting and he said, "Oh, good, Michael, you're here. I want you in this meeting." He's in the process of firing ... the Golan company's cinematographer. I remember him saying that day (and you'll see this in Love Streams and my commentary), "It's a dark hallway. Where's all this light coming from? I don't need light in this hallway. I want it dark. It's a dark hallway." He humiliated the guy, the guy quit, but basically the guy was pushed off the plank. And that was my introduction.

It wasn't my first rodeo in terms of a movie set, but things were very strange. John looked awful, but through some optical illusion, none of us mentioned it, probably because he had three times the energy of anybody there. He could work the hardest, work the longest, and get by on less sleep. One of the first things Gena said to me in her interview was, "John doesn't sleep ... that I know of. He must sleep sometime, but you can't catch him at it."

In the middle of all this, [Menahem] Golan comes to the set. He was an enormous guy, and John's a skinny guy, and John's very New York Greek and Golan is very Israeli, and they're at the bar, it's umpteen in the morning, I'm always there with my notebook, and Golan is saying, "I have these boys from Israel, they're very good, they're coming to do a John Cassavetes documentary." That was the last thing John wanted. He had gotten rid of all Golan's people, one way or another: the sound guy, the cinematographer, the publicity person. And John just turns around and points at me and says, "Have him do it." And Golan turns around and says, "Good. You do it. Shoot lots of film. I want Cassavetes, I don't want the making of." And suddenly I'm a director.

The diary I wrote stank. Nobody liked it. I didn't like it. There were too many things I had to hide. I couldn't say what I knew by then, which was that two or three weeks into the shoot, John was told he had six months to live. He lived five more years, or maybe six, but that's what he was told. And he started doing what he was doing. Nobody caught on. Everybody accepted that this is what John's doing: He's rewriting the script. Ted Allan [the playwright] stopped coming to the shoot, and John wouldn't answer a straight question.

Thanks to Daniel Wetherbee, the editor, and Gideon Porath, the cinematographer, my documentary got made. Golan really liked the film, and I made the decision not to be a director. It would have made me crazy to do that. I wrote the book, and the book died, Love Streams disappeared, Golan's company disappeared. Love Streams hardly got a showing – for years, decades. Golan put out my film on VHS, which also disappeared. I have a copy. Then I came back to my notes. The Cassavetes book was one of what I called my "Oh, shit" books: Oh shit, I didn't write the Cassavetes book. When I moved to Lubbock 10 years ago, I took out my notes, and realized that the book I'd written wasn't good, but my notes were great.

AC: You had a couple of boxes of notes, as I recall.

MV: I transcribed the notes, going through it all, and I had the film on VHS from a couple of showings on Z Channel [if you're not familiar with L.A.'s fabled Z Channel, check out the documentary about it that was made by John's daughter Xan Cassavetes in 2004]. I rewrote it just to rewrite it. (My literary executors can sort out the rights.) Then I got a call from England, asking, "Do you have the rights to your documentary?" I said "No, but I've got this book I just wrote." And within a year, it [Cassavetes Directs] was published. Next, I get a call out of the blue from the Criterion people. Criterion's doing this, blah, blah, blah. Would you want to use your documentary? I went, "Oh my god." It was such an honor. And would you do the audio commentary? I said yes very quickly. We used to say, "Anything for John."

Now, not to go into detail, but my health wasn't great, I wasn't supposed to take on any strain. And after I said yes, I realized that Criterion doesn't improvise its audio commentary. You write it. I said, "A two hour and 21 minute show?" Even though I could count on the book, there was a lot that had to be done fresh, and the book stuff had to be rewritten for commentary. I was very fortunate in Abbey Lustgarten, because she's a terrific editor, and she was great to work with.

So that's the story of how it happened. The weird part about the whole story, from beginning to end, is that I didn't have to ask for anything. The piece I wrote in 1979 or '80 basically said everything I have to say about John and his influence. If you look at Minnie and Moskowitz and then look at Annie Hall, or look at Shadows and then look at La Dolce Vita (remembering that Shadows was a big hit in Italy), John influenced the way people made films, influenced important people. And now his camerawork is standard on TV. I was also talking about his themes. He expresses it in the title Faces: You're face-to-face with people you care about, and what happens? When he talked about the scene where he and Gena, where their characters meet in the kitchen in Love Streams (which is on the cover, I believe, of the Criterion release), he said to me: "Now two people are in a room. That's very mysterious." That's really the heart of Cassavetes: Two people in a room; that's very mysterious.

AC: Did he share with anyone the diagnosis he received?

MV: Nope. I don't know if Gena knew or not, but I don't think she did. Gena is such a sensitive instrument as an actress, I don't think he would have told her until it was over. But that's just my more-or-less informed guess. But he did say little things. As I quote in the book and the commentary, one day after the dailies, he stood up, lights were coming up, and he said, "This is a sweet film. If I die, this is a sweet last film." And there were little things like that.

So everything came from that piece that I wrote for LA Weekly – which drew, by the way, on the piece I wrote in 1975 for The Austin Sun when A Woman Under the Influence came out. That was the first film piece I ever wrote. For me, personally, my whole association with him, culminating with this Criterion release has been the honor of my life, where I felt I did my job as a witness. Letters @ 3AM
For Cassavetes: A Promise Kept Late TV Eye
The mourning after