Roger Corman: An AFS tribute to a wild angel 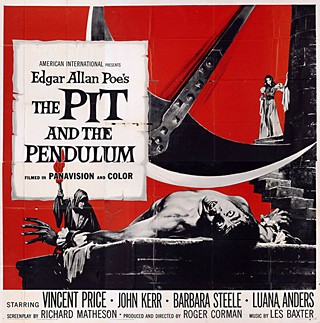 Roger Corman's reputation as a filmmaker precedes him. More than simply the "King of the Bs," Corman was also known as the "Pope of Pop Culture." Friday, the Austin Film Society kicks off a miniseries of four Corman films that will run on Friday nights and Sunday afternoons throughout August.

Devoted to cheap filmmaking, but boasting an unquenchable cinematic vision, Roger Corman turned out commercially produced Hollywood films – often on the kinds of schedules and budgets that make other indie productions seem to be traveling by limo while he was hoofing it.

In 15 years – between 1955 and 1970 – Corman directed approximately 50 films including Teenage Doll, Bloody Mama, The Little Shop of Horrors, The Trip, Gas-s-s-s, and a cycle of films based on Edgar Allan Poe stories. By 1959, when Corman made A Bucket of Blood (the second Corman film in the AFS series), he had already directed 22 films. It was made for $50,000 in five days (which shaved one day off his previous production record).

A good example of Corman's visionary thrift can be found in The Terror. In 1963 while finishing The Raven, another of his Poe films, Corman realized that the production was running ahead of schedule. Rather than leave the set idle for a couple of days, he commissioned a script that would be ready to shoot in two weeks, hired Boris Karloff for two days, and planned to fill out the screen time with an unknown actor named Jack Nicholson. The film was supposed to shoot in two days. Nine months later, after being worked on by a true rogue's gallery of mostly young directors – Francis Ford Coppola, Monte Hellman, Dennis Jakob, Jack Hill, and even Nicholson – The Terror was released.

Corman was, however, every bit as influential a producer as he was a director. Films released by New World, his company from 1970 to 1983, are among my most cherished. His greatest fame is as a nurturer of an almost unreasonable percentage of the next couple of generations of film talent.

Corman paid as little as he could get away with, both for talent and production. Famously, he would give some young director his first shot at a film, then halve the budget the day before shooting began, knowing that the desperate director would make sure it happened. Still, so many people worked for him, often on multiple films, that the deal clearly benefited both sides. They didn't just get their break from Corman, they learned how to make movies from him. Among the directors getting their start with Corman were Coppola, Hellman, Martin Scorsese, Jonathan Kaplan, Jonathan Demme, John Sayles (as a scriptwriter), Joe Dante, James Cameron, Peter Bogdanovich, and Ron Howard. Actors include Nicholson, Bruce Dern, Sylvester Stallone, Talia Shire, Ellen Burstyn, Robert De Niro, and Sandra Bullock. There are writers, cinematographers, producers, and others as well.

The Austin Film Society's series opens with the documentary That Guy Dick Miller about the important character actor who appears in almost all Corman's movies and many of those of his progeny (Demme once told me that casting Miller was considered a good-luck talisman). The film made its world premiere at SXSW.

X: The Man With the X-Ray Eyes

That Guy Dick Miller: Aug. 8, 7:30pm – A Skype interview with Dick Miller will follow the screening.

A Bucket of Blood: Aug. 8, 10pm; Aug. 10, 2pm – A wild and crazy beatnik horror film, this is a hipster black comedy, flaunting its cheapness and featuring Miller at his finest.

Gas-s-s-s: Aug. 29, 8pm; Aug. 31, 2pm – U.S. politics, film style, and Corman's passion for filmmaking all come crashing down at the end of the Sixties in George Armitage's rendering of the pop apocalypse.

Screenings are on Fridays and Sundays at the Marchesa Hall & Theatre.

Roger Corman, That Guy Dick Miller, A Bucket of Blood, Pit and the Pendulum, X: The Man With the X-Ray Eyes, Gas-s-s-s, Austin Film Society